We made the circuit around Grand Island by accident.  We gawked at the bridge as we passed, admiring its structure without realizing that the GPS lady wanted us to traverse its span.  We went around, feeling foolish, bristling a little, but not complaining.  I kept assuring Richard that it would be all right.  He equally insisted that he had not doubted the outcome but that he did not understand why we had gone in a circle.  But we didn’t let it mar our trip any more than just that brief moment.

In Rio Vista, we parked the dusty RAV with its upper load of wood and went into the grocery store.  We found everything that a vegetarian and her vegan companion could need for a couple of days: Oatmeal, tofu, fake butter, the real stuff and eggs for me, soy milk for our Peet’s Coffee.  Then we stood by the car and I realized that we had no place for the groceries and I would have to let him take the wheel.  I could fit in the seat with his backpack and two of Lira‘s re-useable sacks; he could not.  I surrendered my hope of navigating myself to my new home with only mild grumpiness.

Richard slowed after the turn-off to Jackson Slough Road.  He gestured, There’s Mount Diablo, and I took a picture.  Then we made the hairpin turn and before I could really prepare, we slipped into Park Delta Bay and I had arrived.  I said, over and over, I wanted to be driving.  He was patient; he was gentle; he took no offense.  We stopped for the key and made our way to F2, where we would spend the night.

A bit later, Joe the park handyman summoned Pattie Whitaker from her cozy trailer and I got the hug that I wanted:  A homecoming.  She said, I’ve been following your journey.  I didn’t expect you this early.  She insisted on loaning us what we needed.  She admonished me not to make plans for Saturday because there would be a party on her lawn.  We held our flashlights to the ground as we walked back to our rental cabin, talking about the propane guy who would arrive at seven in the morning to set the gauge and test the line.  Just like that, I shifted.  I no longer hailed from Kansas City.  I became a California girl; a Delta dweller; a tiny house inhabitant, planning the deck that Joe will build and the railing which Richard will make from the knotty pine that we carried from Brookside on the top of my car.

I started dinner, moving around the place as though I had always lived here; and always would.

It’s the seventeenth day of the forty-eighth month of My Year Without Complaining.  Life continues. 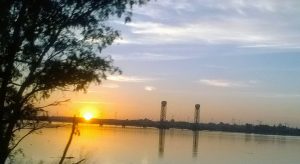 Sunset on the Sacramento River at Isleton.