We drove through the mountains, me at the wheel, my companion with his cell phone taking pictures.  I said, “we should get through the salt flats before dark” and he said, “watch the gauge”.  I pressed forward, remembering, after all this time, a harrowing drive across the flats in the unrelenting fog, Christmas 1980 with a different companion deeply sleeping in the seat beside me.

He said, “there’s a station”, but I couldn’t get into the next lane and exit, not at the speed I was going.  I felt a glimmer of irritation from the other side of the car.  But then the flats loomed ahead and I pressed the gas pedal to the floor in the stretch of highway where the official designation matches the designated limit.  He toyed with his phone some more, asking if he could make a hotspot with mine, looking for signs of life in the desolation through which we barreled.  I nodded but did not let my eyes stray from the road.  He tossed the electronics down, grunting in disgust but low, in keeping with his quiet persona.  I asked, “what’s wrong” and he told me he wished he had a map.  Still I drove.

I told him about the other time that I crossed the salt lake, how I couldn’t see past my windshield, about not knowing if I could stop.  I said, “I was twenty-five, just a kid really, and my boyfriend slept through the whole thing.  When I stopped at the far side, I had clutched the wheel so hard that I cut half-moons in my palms with my fingernails.

We made Delle before the final setting of the sun.  A clerk of indeterminate gender spread salt as I walked toward the door, my muscles too tense for much of anything but stumbling.  I found the bathroom and ignored its filth, standing in front of the mirror, wondering, for the thousandth time today, why I ever doubted my direction.

It’s the sixteenth day of the forty-eighth month of My Year Without Complaining.  Life continues. 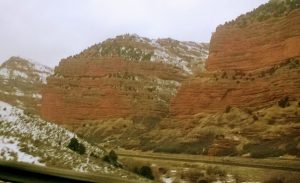 In the mountains east of Salt Lake City.

3 thoughts on “After all this time, again”