We had a list of chores that had to be done in the precious forty-eight hours during which I would have Rick’s help.

The composting toilet needed assembly, venting, and bolting.  Sheldon’s new table slide would be attached to table and wall.  The wood which had made the 1800 mile journey on the top of the car needed his vision to transform into loft rails.  I could not pack the dishes without the shelves that he planned to hang.

We started Monday gloriously, with breakfast in cabin F2, having endured a night with only a space heater in the bedroom.  I brewed coffee in the little four-cupper and scrambled eggs before he awoke so his vegan sensibilities would not have to graciously endure the smell.  He stirred Old-Fashioned Quaker Oats in a pan and topped the result with sliced bananas.  A half-hour on the phone with Home Depot in Lodi encouraged even stronger belief in our two-day mission:  The materials for the deck which Joe the handyman will build could be delivered.

A half-hour later, standing in Angel’s Haven, reality asserted itself.  Rick quickly determined that the soffit into which the toilet had to be vented yielded less easily than my builder had promised.  My back protested each bend to a box. The day marched forward.  We did our best.  By nightfall, only six of the nine boxes which made the final frantic cull back in Kansas City had been emptied.  The toilet had not yet succumbed to the patient coaxing of Rick’s capable hands.  No shelves adorned the walls, nor had the table been restored to functionality.  The lofts did not yet have rails.  We reckoned without the human component, including the waves of conflicting emotions which crippled me with each unfurled section of bubble wrap.

But we warmed the prior night’s leftovers in a pan on my darling three-burner propane stove.  We each got a pleasant visit with my new neighbor Pattie.  Kim, who runs the park, forgave the night’s lodging in the heatless F2.  She came out of her office kiosk into the crisp chill to admire the hundred-year-old knotty pine still strapped to the RAV.  She chuckled over the thought of its cross-country journey and the daring pluck which prompted me to bring it.  You’re quirky, she chortled.  You’ll fit right in here.  Welcome to the Delta.

It seems unlikely that we will complete our list of chores before we run out of Tuesday and energy.  But whatever we don’t finish, will somehow nonetheless get finished.  Joe the handyman will be co-opted in between stages of my porch build.  Perhaps my son can unpack a few boxes when he visits.  One way or the other, Angel’s Haven will be outfitted, decorated, and launched.  Rick tells  me that the first trip in a new boat allows its nervous captain to find all the problems.  It’s called “the shakedown cruise“.  We’re at that stage.  We know our priorities, and we’re forging ahead.  He’ll do as much as he can until it’s time for him to leave, and everything else will get done despite the absence of his competent, clever touch.  I’m here.  I’m home.  I have no lament.

It’s the nineteenth day of the forty-eighth month of My Year Without Complaining.  Life continues. 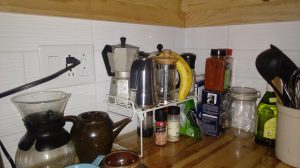 Five non-electrical methods of making coffee survived the packing cuts. And one clay pot for tea.