I’ve had nearly five years to contemplate the science of complaint.  A few conclusions float to the top, with the curdled cream and the shards of misbegotten days.

People complain more than we realize.  They roll their eyes, honk their horns, raise their middle fingers.  Profanity escapes unbidden, unnoticed, unchecked.  Their shoulders hunch.  Body language flashes suppressed ire in waves across the room.  Shriveling glances fell their enemies.  They dash off nasty letters and outraged e-mails.  They make their cases in carefully crafted catalogs.  No-one forswears complaint entirely, not the virtuous, not the faithful, not the dedicated.  Certainly not me.

All those complainers have one common characteristic.  They bear the weight of everything ungodly in their lives with single-minded vigor.  If you consider that the nearly unbearable involves serious illness, death, divorce, and catastrophe, we’re surprisingly deft at slogging through all of that.  We might not do so cheerfully, but we do so determinedly.

We sweat the small stuff.  We endure the unimaginable in silence.

Humans hurt the ones whom they love because they assume the potential of forgiveness.  They moan about inconsequential instances to avoid lamenting those which lie beyond reach.  I see evidence of this day in and day out.  The weather; the bad drivers; the pennies rise in the price of bread.  None of these truly cause much harm to the average person articulating dismay about them.  Behind the rise of their irritation lies their helpless reaction to what really bothers them:  Their spouse’s faithlessness; their mother’s dementia; their empty bank account; their addicted teenager.  They kick the dog because he’s in their way, knowing that they could skirt around him.  They yell at their secretary.  They wad the draft of a letter and hurl it across the room.

Today I saw a couple in the grocery store who intrigued me.  They seemed to be long-married.  The man stood over six feet tall, wide of girth, grey hair falling across his forehead.  He flashed a grin.  But his hands clenched the cart’s handle and his legs trembled.  His wife barely came to my shoulders.  A hump rose between her shoulders.  One arm hung limp at her side.  Her feet dragged as she clung to the side of the cart.

I watched them make their way through the store.  They stopped from time to time.  One or the other would snake out a hand to push a can or box onto their accumulated pile of food.  Eventually they made their way to the check-out, turning ahead of me with my four items.  I didn’t say a word.

The cashier asked them how they were.  “Super,” the man cried.  His wife focused on inching the food from the buggy  I debated offering to unload for her, but she darted a dark glance over her shoulder.  I think she wanted to make sure that I didn’t bump her husband.

I paid and started out of the door, pausing to make sure the couple didn’t need help.  A bagger had come around to load their purchases.  The man’s smile had widened but the woman’s scowl had grown dark as she rummaged in her purse for money to pay the bill.  A sense of sorrow rose within me.  I wanted to turn back, to pay for their groceries, to ask if they needed anything.  I did nothing.

Their faces haunted me for the rest of the day.  I don’t know them.  I have no clue as to their story.  But I saw enough to know that they have one, and that some parts of it involve a measure of sorrow that makes my life seem easy by comparison.  I  keep telling myself that:  I’m one of the lucky ones.  I don’t feel superior to anyone.  But I am, in fact, quite blessed.

It’s the twentieth day of the fifty-ninth month of My Year Without Complaining.  Life continues. 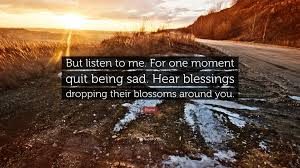