Just before I fell asleep last night, a memory surfaced that I had suppressed for three years, of a trivial incident, one which should not bother me, but which clearly did.

A woman with whom I had only the vague tendrils of an independent relationship asked if she could photograph me.  She said that she had always found my face to be “intriguing”.  Her query came at a difficult time for me.  My raw emotions hovered just beneath the gritty surface of my struggling form.  My life had  spiraled into a maze of intense emotional anguish.

The woman’s request seemed to present an opportunity for me to take a small step towards self-reclamation.  I’d had several photographer friends offer or ask to take my picture.  I resisted each of them.  I do not like to submit to the probe of an unforgiving lens.  I don’t like how I look. From my crooked teeth to my drifting right eye and my wobbly neck, I particularly despise my face.  (No, don’t rush to complimentary comments; please keep reading.)

That this woman reached across the severed social connection between us occasioned by my divorce provided a chance to begin my own salvation.  I’d let her take my picture for her camera club.  At the same time, perhaps I’d forge a bond with her while starting to overcome self-loathing. I saw win-win potential.

She asked me to wear a black dress.  I selected one of my favorites, one in which I like the way I look.  I fixed my hair and applied a little make-up.  On the way to her house, I stopped at a local candy shop to buy a hostess gift, just as I had been taught.  Never go anywhere empty-handed.

An hour later, I stood beneath a tree in her backyard, disguised as a corpse bride.  Draped in black netting from crown to torso, nearly invisible beneath the sweep of tree branches, I prayed for the horrible experience to end.  When it did, I made my apologies for haste and dashed away, fighting back tears.  The woman didn’t want to photograph me.  She didn’t find my face at all photogenic.  She needed a subject for that week’s theme:  Dead brides in black and white.

I struggled between sobs and hysterical giggles all the way home.  I drove my fist into the steering wheel.  I wailed in the empty car, lamenting the twenty-five bucks worth of expensive chocolate, the stupid yearning for this woman’s acceptance, the absurd notion that she actually wanted to photograph me for myself, for how I looked and what I showed the world.

The woman had said that if she “got any good shots”, she’d give me one.  She did:  A black and white shot of just my eyes in a box-store metal frame.  Its size accentuated every wrinkle, each unplucked grey-tinged eyebrow hair, the chronic puffiness.  Detached from surrounding features, my eyes had no logic, just two crazy orbs, one slightly askew, agitated and unfocused.  I shredded the photograph after I moved to California.  I repurposed the frame. The woman might have thought of it as an art piece.  For me, it symbolized the unbearable insidiousness of the session.

I never heard from the woman again.  She never called for coffee afterwards, or sent a Christmas card, or wished me well on my departure.  She sent an email thanking me for my assistance in her project.  I answered with the practiced politeness that my mother taught me.

I remain unsure of this woman’s intent.  What she did felt like mockery, but she might not have perceived or predicted the potential impact on me.  She clearly had a goal and used me to attain it, but probably not with the thought that I would suffer as a result.  As I’ve often told my son, people live in the realm of self-absorption more than we realize.

I fell asleep last night with that memory at the forefront of thought.  I don’t know why it surfaced yesterday.  I passed a dreamless night and woke in my usual state of unrestfulness — no more, no less.  I pulled myself out of bed, started coffee, and scrolled through social media.

A friend posted on Facebook that she had launched “Day One” of a healthy regimen.  “Again,” she added.  “Day One, again.”  Though understanding that she meant to mildly rebuke herself for needing to recommence, I co-opted the label to different ends.   #DayOne became my call to action this morning.  On the strength of my friend’s example, I made steel-cut oatmeal for breakfast.  I did a half-hour of stretches.  I listened to some lively music as I started laundry.  I might be the very image of a macabre abandoned lover, but I do not have to accept that role.  I can shed my funeral garments.  I can refuse to see myself as someone’s cast-off bride.  I can adorn myself in the gossamer fabric of joy.

It’s the eighteenth day of the fifty-ninth month of My Year Without Complaining.  Life continues. 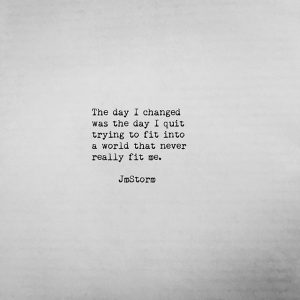