I’ve written this entry three times, and deleted it three times.  On my fourth attempt, I’d like to distill it to the essence and avoid the specifics.  No good can come of recounting the incidents which give rise to this contemplation.

I’m thinking about carelessness, the state by which you swing your metaphorical arms and knock your mother’s vase to the floor.  I never meant. . . you stutter, but what you meant and didn’t mean has little relevance.  Your mother lifts the pieces from the tile.  She runs a finger over one jagged edge.  You gasp at the thin line of blood which appears on her skin.  She turns away.  Hours later, she mentions that she’s forgiven you.  In the meantime, you’ve died a thousand deaths.

The slipper settles on the other foot.  Your mother strives to be magnanimous.  She rushes to assure forgiveness, later sobbing in the quiet of her room.  Her own mother, long dead, gave her the vase.  She remembers her mother saying, This came so far with me.  Take care of it.  She intended that it would be yours one day.  She loves you; this piece of pottery means so much less to her than you do.  But still.

Once upon a terrible time, I sobbed into a telephone, desperate, anguished.  Came the weary voice at the other end:  I’ve been a poor guardian of your heart.  The admission stunned me.  It sounded like a feeble understatement and yet — achingly true.

The troubled path on which I walk bears the debris of many other broken hearts, discarded by other careless guardians.  I hastily skirt around the mess, afraid to look, terrified of what my lingering gaze would reveal.  But then, I fall back and study the scattered ruination.  I can learn from this.  I take my time.

It’s the thirteenth day of the sixty-fifth month of My Year Without Complaining.  Life continues. 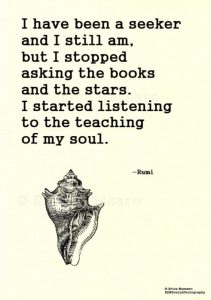