Last night, Michael had the Grateful Dead playing on the radio in the hostel office.  Now as I sit in Downtown Local, Box of Rain starts and I think of my brother, as it would be impossible not to do since we played it at his memorial service.  The words which I had thought to write vanish. His face rises before me.  I do not know if he would like this place, as much as he enjoyed the urban life.  But he died on property that he had once purchased with friends in rural St. Charles County so perhaps he would.

Other than the music I would not have thought of Stephen.  No anniversary lies in January — neither birth (Christmas) nor death (mid-June, exact date unknown).  One of my favorite photos of him was taken on a sort of ranch in south central Missouri. He’s sitting on a log early in the morning, wearing a thermal shirt.  He’s about twenty.  He still has hope stamped on his face.

That hope faded until it finally died, with him, nearly two decades later.

I’ve squared away my bed for another night and now I am in Pescadero having coffee.  I’m  violating several of my dietary restrictions with a pan a chocolat.  It’s early enough in that day that I should be able to walk off the sugar and the gluten before I try to sleep tonight.  Both wreak considerable misery on my CNS.  It’s worth the risk from time to time and this croissant fits that description.  I’ll take my chances.  The sun beams into the window through an absolutely cloudless sky.  Whatever on earth a box of rain might be, we won’t have one here, not today, anyway.

I walked to the point this morning and tried to go live on social media to share the glorious sound of my Pacific.  That spot lies beyond the reach of the internet.  So instead, I took a little video and then just breathed the sea with its heady scent of salt and sand and serenity.  I cannot get enough of it.

The place where i write begins to fill around me.   Soon there will be too many people for me.  I’ll worry that they need my table or that the customers will be bothered by the heavy sound of my asthmatic breathing.  I will pack my laptop and brush away my crumbs.  I’ll throw my bag over one shoulder and go out into the day, in search of another sunny spot.

It’s the twenty-eighth day of the forty-ninth month of My Year Without Complaining.  Life continues. 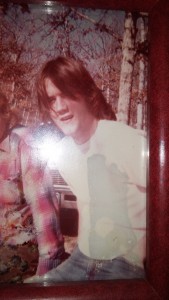 I believe this was taken at the perennial gathering of friends called the Elvish Banquet.