As soon as I heard the voice of the Pacific, I knew that one night would not suffice.  Nothing could spoil this peace, not even the rude woman at Slow Coast who shrieked at me as I fumbled for my inhaler.  I tried to explain that the fragrance had overwhelmed me but all she could do was rage and demand that I take my coughing outside, spraying Lysol in  my face, waving her hands at the leper she judged me to be.  I backed out, stumbling over the threshold of the silver Air Stream.  I had driven twenty-two miles to buy Cause Bars.  Not this trip.

I went north, stopping at the Pie Ranch for vegetables and a flourless brownie.  Too late, halfway up the road to Pigeon Point, I realized that I had not brought oil or butter.  I could picture them on my counter, where no doubt they will be on  my return.  No matter.  If Michael in the office cannot lend me some, I’ll eat apple and hummus tonight, and drive into Pescadero in the morning for something to cook the farm fresh potatoes and carrots.  I make a cup of tea and go out to the back sidewalk, where the ocean waits, where I can rest, watching her calming motion.

The man who carried my bag from the office told me that he lives in Burlingame.  He explained that it is by the airport in San Francisco.  He’s just here for one night.  He smiled, but I could see a sort of sorrow lingering in his eyes.  I don’t know if he’s come alone or with a partner.  But he has come to the right place, with all that sadness.  He can leave that here when he goes back to the city.

I log into the hostel wi-fi and check my messages.  Seeing nothing urgent, I stand in the window waiting for sunset.  I’ll try to film it, or go live on social media.  Back home; in Los Angeles; in Idaho, Berkeley, and St. Louis; folks who have not yet abandoned me will watch.  They’ll tell me that they appreciate the sound of the sea.  They’ll say that they wish they could be here.  I’ll be smiling, here at the edge of the world.  I’ll be alone, but never could I be lonely in the presence of my peace. 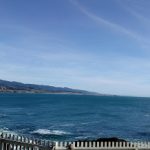 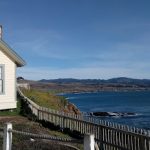 One thought on “In the presence of my peace”