It started as a quest to find a small wood clock.

The boxes we pulled from under the bed before the demolition still sit in the back of my car waiting for a suitably sunny day.  I have to drag the empty plastic tubs from the storage cabinet on the back of my house to make room.  In the meantime, a recent conversation about old timepieces sent me rummaging in the bubble wrap, leaning through the open car door, the damp of a Saturday afternoon clinging to my sweater.

My luncheon guest had already made her way back to Oakland.  I thought I would find the clock with ease but soon a  pile of packing material heaped on the floor of my car.  I didn’t find the clock.  But my rough hands tarried on the smooth surfaces of pinch pots and sand bottles and the imprints of small hands.  Angels emerged from the wrapping, and paper flowers, and the image of a bird fashioned from autumn leaves by an  earnest kindergartner, laminated with patience by a teacher who knew such things would tug a mother’s heart strings decades hence. 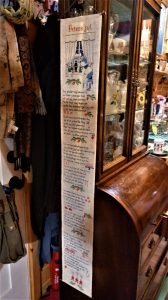 I didn’t find the clock, but I found the Peters Jul scroll that I rescued from the trash at my old classmate Lise Koenig’s estate sale a few years ago.  The auctioneer thought it worthless.  I couldn’t bear the thought of something that Lise had once found precious tossed away like garbage.  Bad enough that she had died alone, after her husband’s passing, falling down the basement stairs and lying on the cold concrete floor until a neighbor began to worry. Lise and her husband had lived one block over from me in Kansas City.  They never had children.  They biked the neighborhood until their physical condition betrayed them, and then they walked.  Eventually disease claimed him, and she went on walking alone until her own death a few years later.  I never spoke to her in all those years of being neighbors.  Keeping her banner seems to be a small thing.

The plaster handprints bear dates which are thirty years apart.  The outline of my brother Stephen’s small hand now hangs below that of my son, just as it did in Kansas City.  I can see them from my little table.  I think Steve would have liked my tiny house.  He would have understood my urgent need to leave the grimness that my life had become.  He would have slipped his arm through mine, just as he did so many times, drawing me onto an imaginary dance floor, spinning to the rhythm of music in his head.  Steve walked me down the aisle at my first wedding, to the glowering consternation of my feckless father.  Halfway to the front of the church, Steve leaned down to whisper, You don’t have to go through with it, Mare bear.  We can just have a big party.  Nobody will care.

He would have loved my Pacific Ocean.    His soul yearned for freedom, and he could have found that here, if anywhere.

I carried the sand bottles and set them on the loft floor, near the edge, where I can see them from the kitchen.  I remembered taking our two foster children, Mikey and Jacob, to the Renaissance Festival. My son Patrick and his friend Chris helped the younger boys fill their bottles, tipping them to make the layers.  Jacob got adopted but Mikey aged out of the system living in a group home.  I heard some dire stories about his later years.  We loved those boys.  My heart still aches at the thought of what they suffered before their removal from their addict mother’s home, too late for Mikey but in time for Jacob to be saved.

I never found the clock.  The sun began to set.  I repacked the boxes and came inside.  I stood in the entry way of my tiny house, surrounded by a life time of memories.  I drew my sweater closer and went to make a cup of tea.

It’s the eighteenth day of the seventy-third month of My Year Without Complaining.  Life continues. 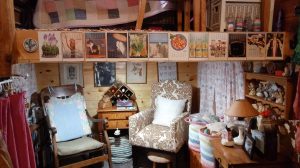 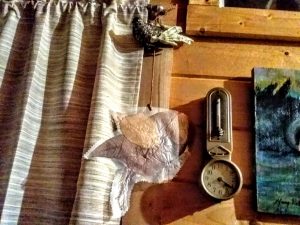 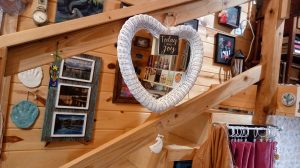 One thought on “A brief sojourn into forgotten days”