The other day, I watched three men stand in the stinging rain struggling to install my new generator.  One of them had just been out walking his dog and stopped to lend a helping hand.  The other two had volunteered.  All three live in the same RV park as I do.  Two also work here, though their job descriptions do not include helping their neighbors.  That comes naturally to each of them.

The area lost power as they completed the task.  One plugged the machine into my house and another tried the electronic starter.  I heard mutterings through the whistle of the wind.  I saw a muscled arm inside a soaked jacket pull the cord.  The machine roared to life.  We cheered and then split, diving for our respective homes.

An hour later, power restored, I stood outside grappling with the connection until one of the men saw me through his window and came to make the switch.

It turns out that the generator which I bought cannot run my house.  Though it could work using the  50 amp / 30 amp adapter, something about the type of heater that the builder installed and the way it is wired inhibits full functionality.  I sat in my house staring at the user book thinking, Why did no one teach me this stuff?  Like the good recovering Catholic that I am, my dark thoughts segued to self-recrimination for failing my son in the same way.

My mother didn’t teach me lots of things.  How to be 67, for example; she never cleared 60, so she had no insight to offer.  I could use a little help with that.  I’m letting the grey overtake the chemical color and my true age will soon be apparent.  I have no idea how I should act.

My mother’s father experienced considerable challenges during the depression.  Mom told a story about a failed investment.  He bought a bunch of beer and stored it in their garage, intending to sell it, hoping for a profit.  The temperature dropped.  I’m not sure at what point beer freezes, but freeze it did, and the bottles exploded.  I knew my grandfather as a strong man, soft-spoken but reliable; sturdy and solid.  As my mother told the story in her low, husky voice so like his, I pictured Grandpa at the side of that garage, hand on the doorframe, staring as his meager savings seeped across the dusty concrete floor.

My mother never taught me how to deal with grief except by adopting the same stoic stare that her father must have worn in the days following that small catastrophe.  If Mother cried, she did it after dark, or in her car on the way home from work, or in the bathroom.  Nobody had invented the term “process” when it might have done some good for us.  We didn’t discuss what we faced.  We put our best feet forward.  We sang as we roamed the darkened neighborhood well past bedtime, waiting for our father to pass out so we could go home.  My mother told us, When my children walk down the street, I want people to say, ‘See those Corleys:  how they love one another.’  She linked arms with a child on either side of her and we strung out in a chain, four on one side, four on the other.  Or maybe just six of us, split into groups of three.  The little boys might not have yet been born.

The list of things that I don’t know how to do would fill an old-fashioned phone book.  Out here in the west, on the banks of the San Joaquin, my shortcomings loom large.  I know nothing about electricity or plumbing. I can’t hitch a trailer.  Despite forty years of law practice, I didn’t realize that my insurance policy excluded flood damage.  But city life with its intricate social interaction posed just as many obstacles.  I never learned small talk, the art of dressing for a party, or how to apply make-up.  I couldn’t mow a lawn or follow a budget.

My mother had a certain sixth sense, though; and sometimes I think I might have learned to listen to my inner voice in the way that she did.  I remember a stormy summer Sunday.  She sent one of my brothers to the store for batteries so we could play the radio.  A few minutes after he left, a siren wailed as an ambulance rushed past our house.  Without speaking, my mother rose and walked coatless out the door into the rain.  She followed the sound of the siren to the place where her oldest son had crashed into another vehicle and sat dazed on the side of the road.  I’ve had moments like that, when the phone rings and I suddenly know what tale of woe the long-distance line will convey.

The wind has stilled.  The rain seems to have paused.  The power held; the lights never even flickered.  A sense of calm seeps into my tiny house.    Light streams through the transom window as the clouds lift.  A distant hum tells me that the storm has moved to the east; another one might yet venture inland from the ever-present sea.  But for the moment, we are safe.  I close my eyes.   I think I hear my mother calling.  Yes, ma’am, I whisper.  I’m still here.

It’s the fourteenth day of the one-hundred and ninth month of My Year Without Complaining.  Life continues. 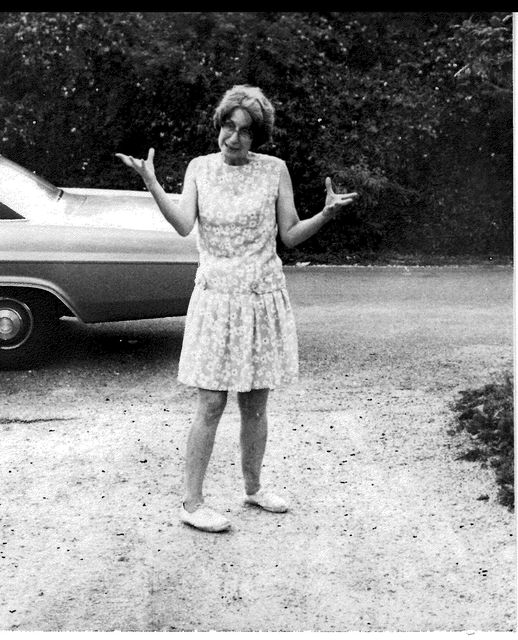 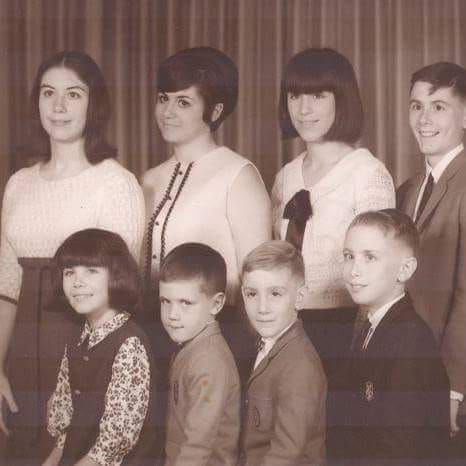 The eight children of Dick and Lucy Corley