It could have been ugly.  Ugliness certainly asserted itself, and in response to its sad bleat, I melted down and spat back a bit of venom of my own.

I don’t know why people have to be ugly,    One theory says that ugliness is the tragic expression of unmet needs.  This resonates with me.    Want and longing begat bitterness.  Unmet needs come out in the jackal speech of which Dr. Rosenberg gently spoke time and time again in the red shirt videos which my son shared with me.  Dr. Rosenberg divides speech into jackal (violent) and giraffe (nonviolent).  He chose the giraffe as his image because of all mammals, the giraffe has the biggest heart.

When one spouting jackal speech injected herself into my day yesterday, I had been running on four hours’ sleep for days on end.  Work, pack, maneuver, sleep for four frantic hours, repeat.  With the universe’s gift of gracious friends, I had made it as far as the last few hours before I had to be out of the Holmes house.  I could not see that I would make the deadline and begged for two more hours.  One, even,  Please.  But the jackal said that my request was not reasonable,  I fell an inch closer to complete collapse.

The appointed hour arrived.  I stood in the driveway, dread washing over me.  I had been told that I had to leave that moment, that the new owner would be arriving.  I signaled my friend Katrina to start getting anything critical.  She began to assemble a handful of items.  I urged her, Leave those, I need these. . .And then I stopped — my arms full of clothing, my heart filed with anxiety because of the stern admonishment, the rank condemnation.   I watched the buyer and her friends walk toward me.  Down the sidewalk, down the driveway, and then: There, in front of me, real.  The woman who had bought my home smiled and said, Oh, I’m so glad to meet you — look, we brought you cookies.  And we want to help you.

Help they did.  It turns out that the judgment of unreasonableness which had been stamped on  my request for two more hours had not come from this woman, nor from her musician boyfriend, nor from her side of whatever morbid equation we balanced.  I told my agent, we just wanted to be there before dark so we could take pictures, but that it didn’t matter if you were still there.  I told her to let you know that my boyfriend, my cousin, and I would help you finish.  I told her that I knew you had lived here a long time, and you probably didn’t realize how long it would take you to pack a lifetime.

She said that.  Those words, exactly those.  She asked, Didn’t your agent tell you that?  I shook my head.  I could not respond.  I knew that if I said anything, I would sob — that I might stagger and fall into her arms.  Her cousin stepped forward and took the burden from my hands.  She said, Where do you want me to put this?  I gestured, to the air, to the sidewalk, to the pile that we had started amassing on my neighbor’s lawn.  The woman who had bought my house told me that they would take their photographs and then work with me and my friends, until I got everything out.  I could barely utter two words:  Thank you, before the tears fell.

I admitted: I was so worried about this moment; and she hugged me.

They took their pictures, then shed their coats and started carrying boxes.  They urged me to leave the pile of thrift store donations.  They said they would take care of them.  We got the last of everything loaded into the vehicles of my loyal compatriots or onto the pile in the yard.   My helpers left but I stayed behind to watch the stuff on the lawn, the God-knows-what that I could not bear to have stolen.  I asked the buyer, Do you mind if I wait on the porch, thinking to be as little more trouble as possible. She replied, Come inside, we’ll wait with you, and help you load the rest when he gets back.

I showed her all the little nuances of the place.  I took her around and talked about the work which I had done to get ready to list; and the work that I had implemented after her inspector’s report.  We laughed about the clumsiness of dealing with the barriers which stood between us.  She shared her frustration with the realtor system; I told her, You’re preaching to the choir.

At some point, I said, We’ve got to stop referring to you as “the buyer”.  You’re “the new owner” now.  She beamed.  Her cousin practically cooed.  A warmth spread over me, the beginnings of acceptance, I think.  This woman had become the steward of the Holmes house whom I had wanted to find.  She already loved the house as much as my son and I did.  She would care for her.  She would cherish her.  She would add joyful memories to the ones which I had made in the twenty-four years of my own stewardship of the place.

As we went through the house, I kept gesturing to the letter which I  had left for her on the mantle.  I confessed that I had risen at four that morning to write the letter in the quiet, as I always wrote.  I did not try to squelch my tears, nor to hide them.  I referred to the angel hanging outside and said that I wanted to leave it for her.  She shared with me that she had told her mother about that angel when she had first toured the house.  I asked her if she wanted the wind chimes and she said, I’d love to have them.  Then we convened around the pile of items to donate and emptied the boxes.  She gushed over each item.  The Italian set which had been my ex-husband’s first wife’s mother’s dishes went right back into the built-in cabinets in the breakfast nook.  She exclaimed over a tea pot because she has a tea pot collection.  She even liked the Grateful Dead mug with its chattering teeth at the bottom.

We stood at the window watching for my companion’s return.  Her cousin told me that the rainbow flag on my house had impressed them.  We knew that she was moving into a neighborhood where the people shared our values.  I released a breath which I had not even noticed.  I explained my relief:  The agent had insisted that the flags, both of them — American and Rainbow — come down for photographs and just as forcefully, I had demanded that the flags remain during the open house.  I would not sell to anyone who couldn’t tolerate the concept of inclusiveness.  I would rather have burned the place for the insurance.

I finally told her about the jackal who had come to my driveway and insisted that my request for additional time violated the buyer’s legal right and was “not nice”.  I cried.  She cried.  I told her about the last gasp to get everything out.  She asked me if I had sold my china cabinet.  I admitted that I had not and offered it to her — as a gift.  I asked what she intended to do with the little bedroom.  She explained that her boyfriend wanted an office. I told her about the library table and the computer desk, that none of my friends needed them and no one had offered to buy them.  I gave her those, too, on condition that they come retrieve everything from the living room of the stalwart companion who had single-handedly moved all of my leftover furniture into his space.

Over and over, she expressed regret that the agents of change had not allowed us to meet.   So much could have been easier for each of us.  I would not have shipped boxes of china to Miranda’s storage unit or sold the wrought iron for pennies.  We would have worked out a way for her to keep what she wanted and pay me some nominal amount over time.  Each of us would have felt better about the transition.  She would not have worried about me struggling to get everything out because she and her cousin would have been there with coffee that morning.  We could have baked the cookies in the kitchen as we worked, using the cookie sheets that I had thrown in a box to donate.

As it happened, though, the hour in the Holmes house with me, the new owner, and her cousin erased all that jackal talk.  No vestige of its nastiness lingered.  Our hearts beat in synchronicity.  What could have been ugly became beautiful, because of her desire to help me, and my desire to sell the Holmes house to someone just like her.

It’s the ninth day of the forty-eighth month of My Year Without Complaining.  Life continues. 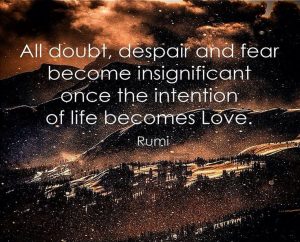 4 thoughts on “Synchronicity and Serendipity”