My son spent a summer in Los Angeles, years ago, in college or graduate school.  At the end of the summer, he drove straight to Kansas City, never stopping.  He left LA in the dead of night and saw the sun rise over some mountain range.  He sent a photograph of it.  That started a kind of competition between us which I have continued, on my own it seems.  Who can find the most beautiful sunrise?  I let that moment overcome my worry about his sleepless hours on the road and what compelled him to make that long trip without stopping to rest.

The gallery in my phone burgeons with snapshots of dawn and dusk.  I used to carry a little Canon but the lenses in my phone surpass that mediocre technology.  As autumn overtakes my world, my workday ends closer and closer to the Delta sunset.  I watch the crows settle in the gathering darkness as the last crimson rays seep across the horizon.  When my alarm trills in the stillness of my tiny house, I contemplate sunrise over Lake Michigan and my son’s home in the city on its southern shore.  Sunrise, sunset.  Sunrise, sunset.  Quickly go the years.

He called me today, that boy of mine.  We talked about the biopsy which I have scheduled for the morning.  The scariest thing about the procedure is the general anesthesia.  Or perhaps, the two hour drive from my home on the San Joaquin to the Stanford facility at Redwood City.  I saw an horrific accident today coming back from lunch in Half Moon Bay.  When I texted my friends to make sure that they had gotten through before the crash, the answering assurance included this observation:  It’s why we say don’t take tomorrow for granted.  That must have happened within minutes of our passing through.

As I face yet another medical challenge, thoughts of my mother hover near.  Although the doctors called her death the result of metastatic uterine cancer, we knew better.  A careless doctor labelled her symptoms hysteria or maybe menopause, even though she’d gone through the change fifteen years earlier under his care.  He prescribed Premarin, known even in the 1980s to aggravate uterine cancer.  It did its job.  Then a careless surgeon caused damage which delayed radiation.  Mom died a few months later,  two weeks shy of her fifty-ninth birthday.

I bitterly raged against the men who treated my mother with so little care.  I could do nothing about the surgeon; but the gynecologist retired under pressure from Lucille Corley’s baby daughter.  I could not save my mother, but at least I could avenge her.

The new maladies with which I’ve been diagnosed have plagued me for several years, during which I mentioned their symptoms to several doctors.  I desperately wondered if my mother’s fate loomed large for me.  Not until I got referred back to Stanford did someone listen.  Now a whirlwind of specialists have taken charge of my disposable hours.  They tell me that I can see many sunrises with careful attention to my health.  I certainly intend to try.

It’s the twentieth day of the one-hundred and sixth month of My Year Without Complaining.  Life continues. 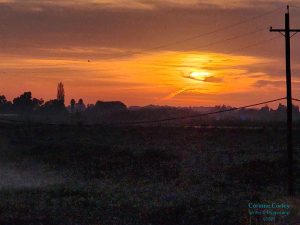 Sunrise in the Delta. 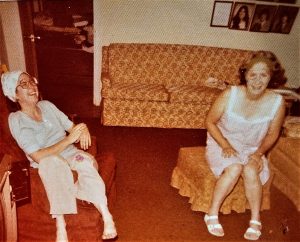 My mother & me having facials. 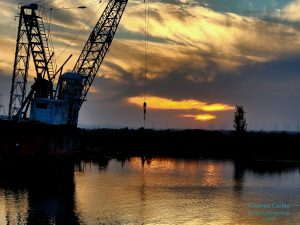 Sunset in the Delta.