I’ve been listening to the news again, so bear with me.  I remain aghast at the flood of accusations against powerful men.  The nature of the allegations does not astonish me, nor their number.  Instead, I sicken at the thought that in 2017, people still behave so badly towards one another.  I would have thought our species might have reached a higher level of evolution by now.

A secret about me:  In addition to the Food Network and every tiny house show on any channel, I binge-watch Project Runway.  Last evening, a “full-figured” or “plus-size” model cried as she thanked the show’s moderators for pioneering acceptance of Every Woman.  A beautiful girl with cocoa-colored skin, the model stood before the panel of judges wearing a gorgeous, innovative outfit.  I watched the tableau thinking of all the girls in high school, grade school, college; women in the workplace; we older gals — all of us, the entire female portion of humanity, just wanting to be considered beautiful enough to grace someone’s arm and strut our stuff.

How did our own standards twist until they festered within us?

I’m not complaining; or if I am, it’s about something so basic and yet so profound that you must excuse me.  I try to find joy in every corner of the universe but this state of affairs defies even my deliberate cheer.  A senate candidate stands accused of preying on young teenage girls while in his thirties; and though he does not deny his actions, he still plans to run and his supporters stand beside him.  This spans both sides of the aisle, from Bill Clinton to Donald Trump to Al Franken and all those politicians, movie moguls, actors, and sports figures in between them.  It’s no wonder women get a little bitchy.

Still, I rise and stand square-shouldered beside the likes of the glorious Uma Thurman.   She tells us that she will not speak until she can control her anger.  Her quest is not so different from mine.  “Complaining” does no good but speaking out against injustice always will.  That’s part of what I have been learning.  I started out with this dogged cheerfulness but in the four years during which I’ve slogged away at this blog, I’ve taken every lesson and fashioned a true path for myself.  Some things deserve to be labeled in vivid red:  POISON.  Dump this down a sturdy drain.  None of us need this garbage.

Embrace joy; disdain evil.  If you walk with evil, hold out your hand:  I’ll pull you to the bright side.  But be prepared to honor those  of us who dwell here.  We treat each other well.

It’s the seventeenth day of the forty-seventh month of My Year Without Complaining.  Life continues. 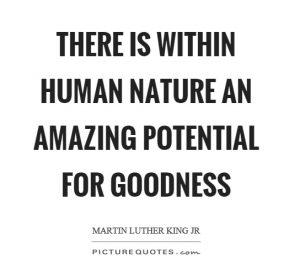 3 thoughts on “Sometimes walking on the bright side takes a little effort.”