In elementary school, I socialized with a group of girls who considered themselves to be misfits.  We got that reputation for various reasons.  I walked funny; another had an Irish accent; a third acted tomboyish; another carried too much poundage on her tall frame for fashionable presentment in those days.  We knew that our classmates did not accept us; but we honored each other in the best way we could, banding together on the playground and hissing at the boys who tortured us and the girls who mocked us.

I’ve always had a group like that.  Though I never quite felt as though I belonged anywhere, the women with whom I surrounded myself took the edge off of my loneliness.  I’ve had some damn fine friends.  I won’t name them, because I would doubtless overlook someone.  But my tribe sustained me through the darkness which surrounded me time after time.

In March of 2016, I acquired two more to add to my list of women who enrich my life and ease my sense of isolation.  I met Sharon Alberts and Ellen Cox, mother and daughter, at HI Pigeon Point.  They had come for the sea lions, while I had tacked a weekend on the coast to my quarterly appointments at Stanford.  We found common ground over coffee and yoga in the living room of the Dolphin dorm.

Yesterday my son and I spent our second consecutive Christmas in the home of Sharon and her husband Jerry.  Ellen had come down from Oregon where she has begun the final stage of her degree in civil engineering.  At a laden table, over Lodi wine, with the Alberts traditional “chocolate cake for baby Jesus’ birthday” at hand, we talked for hours about life, liberty, and the pursuit of happiness.  Afterwards my son drove and I DJ’ed all the way back to the Delta.  A finer Christmas has not been had.  Just as fine, perhaps; but none finer.

I’m missing the Gathering of the Usual Suspects, the annual  gift exchange at my house in Kansas City.  Dinner at the Alberts/Cox residence went a long way towards easing my homesickness, and created yet another in a series of  #christmastraditionsreinvented.

It’s the twenty-sixth day of the sixtieth month of My Year Without Complaining.  Life continues. 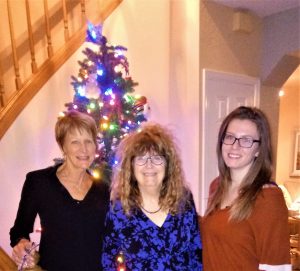