I vaguely recall the day of my brother Stephen’s birth in 1959, when I was a little thing, barely four.  My sisters tell me that we couldn’t play the noisy games which Santa had brought for Christmas, but I don’t remember that.  My mother went into labor during the morning festivities.  Dad took her to the hospital.  I imagine my grandmother had come down to care for us.

My parents intended to name our youngest brother “Christopher” because of his birthday.  When Dad came back that afternoon, he explained that they had changed their minds.  Mother always wanted the same number of boys and girls.  They chose “Stephen” because he made everything even.  Get it?  Even Stephen.

He had a sweet face and a saucy disposition.  You could upset him easily but he forgave with equal swiftness.  He loved dancing, the Grateful Dead, and snow.  He had a sense of style and poured a mean Stinger, something which I learned on the day of my mother’s funeral.  I woke the next morning in a heap behind the bar at McGurk’s in St. Louis.  Stephen had already started coffee and lit his  first cigarette.

He had a wicked keen humor with a sarcastic edge.  He once met me at the airport ahead of my boyfriend.  He swung me into the air and nestled me under one arm.  “Get the luggage, dude, I’m taking my sister to breakfast,” he told the astonished man who thought he would be retrieving me.  I shrugged and smiled.  What could I do, but laugh and go?

My memories of Stephen have been romanticized into oblivion.  But I have no doubt about the insidiousness of his addiction.  I once watched him shoot up with heroin while I sat nursing my son.  The sight drove me to stay with another sibling for the week of my father’s funeral.  I understood the pressure which Stephen felt, but I couldn’t expose myself or my infant son to such conduct.

Stephen had a lot of glory to him.  He loved fiercely, lived fully, and reached his hand to anyone within radius when the music started.  I realize the grandeur of his persona provides small comfort to those whom he disappointed.  I do not mean to belittle the loss which they felt.  I loved him, though.

His death by suicide gutted me.   His pain drove him to the trigger and has nothing to do with me.  I do not claim the anguish.  I merely survived while he died; and for that, I have the burden of my own impregnable suffering.

I see the stamp of Stephen’s face on his daughters, with whom I have developed some relationship.  They had marvelous mothers; and noble, wonderful adoptive/step fathers.  They made lives without my brother.  But he exists in them nonetheless.  I pray that they got the splendor of him, and not whatever drove him from all of us and from this life.

As I sit in my writing loft, rain beats on the metal roof.  The Delta has entered the rainy season.  No white Christmas here, I’m afraid.  But those days rise in memory.  I particularly recall the Christmas when my mother got sleds for my little brothers Frank and Steve.  They came into the living room early and beheld the shiny sleds with their gleaming metal runners and big bows.

Frank moaned, “Mom will feel so stupid, since we won’t be able to use these.”  Then Steve opened the curtain and saw the blanket of snow  in the front yard.

“It’s a miracle!” he shouted, and the two of them danced around making such a racket that my mother emerged from the back bedroom to shush them. They fell upon her with glee.  I will never forget the sight of my mother, in the glad embrace of her two baby boys, as the silent snow steadily fell outside the window.

I named my son after my brother.  He loved his uncle Steve.  Once a lady bent over him and said “Merry Christmas, little boy! Do you know whose birthday it is?”  Patrick chortled, “Yes, I sure do!  It’s uncle Steve’s birthday!”

Happy birthday, Stevie Pat.  I miss you.  I hope there is no pain in heaven; and that you’ve found a place to lay your head and listen to the music you love.  I hope there’s whiskey in heaven.  Cheers!

It’s Christmas Eve, the twenty-fourth day of the sixtieth month of My Year Without Complaining.  Life continues. 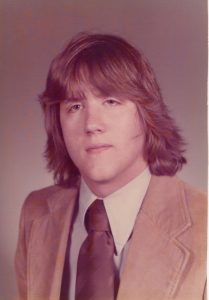