The inevitable strained conversation fell of its own weight on the emergency room floor.

On a scale of zero to ten, with zero being no pain and ten being the worst pain you ever felt, how do you rate your pain?  The nurse stood, alert if slightly bored, while I pondered how difficult to be.

I guess it was more of a failed metaphor than a false equivalence, but still.  I don’t play those games.  This perky girl in the Winnie-the-Pooh scrubs probably can’t even fathom what “ten” might be for many people, including me.  And I have never, since before my ability to recall, lived at zero.  Even on morphine.  Even on Vicodin.  Even sprawled on a futon with a bottle of wine tipped on the floor beside me, listening to the rain hit the window sill and wondering if I should get up to close the blinds.

I don’t rate my pain that way, I hazarded.  She closed her face.  I continued.  My pain scale is, thirty-two breaks in my leg from going through a windshield backwards, to watching my mother’s agonizing death from misdiagnosed cancer after it hit her bones and her brain.   I paused.  The current, new, acute pain, this probably broken shoulder or whatever it is, can be described as tolerable by comparison.

I can give you a pain pill, she said, somewhat wearily I thought.  I declined.  Tylenol? I nodded.  She went out, scribbling on a piece of paper which she shoved in her pocket, probably a note which read HELP that she’d stick in her windshield when she went out for a smoke.

Two days later, home from the hospital with an ineffectual sling, thyroid medication which seemed to have nothing to do with my fall, and a discharge note telling me what doctors to see, I lay in bed and thought about the ache in my ribs.

No breaks there, the doctor had assured me.  Except those two old ones.  I stared.  I had no memory of ever breaking a rib at all, let alone two.  I didn’t say so, though; hospitals tend to get a little cranky if they think you’ve got unexplained injuries.  The broken clavicle didn’t need surgery but every body who came into my room offered narcotics, including the floor nurse who couldn’t get an IV started and muttered to herself as she gave me fluids in the line started by the ambulance guy.

I didn’t take the scripts they offered, except for the thyroid stuff.  I threw the sling away after three days, mostly because it held my arm at the wrong angle no matter how many times I adjusted it.

A week later, I sat in the ortho guy’s waiting room listening to two little boys talk Spanish to their mother.  One of them had a pink eraser stuck on the end of his finger and he kept coming over to me and poking my broken arm with it.  His mother said, No, no, but I smiled, and assured her that I didn’t mind.  I drank bad coffee from a Styrofoam cup and offered the kid some crackers.  He giggled and said something that I couldn’t understand, and poked me again.  I think he meant to be kind.

The X-Ray technician said, Where’s your sling?  I nearly launched into a lengthy explanation of awakening in the night gasping for air because the strap had wrapped itself around my neck.  Instead I met her eyes and replied, Actually, it’s on the floor of my car.  She didn’t ask why.  I expected her to write one of those little HELP ME! notes but she just slammed a metal plate against my back and snapped, Don’t breathe, don’t talk, don’t laugh, don’t move a muscle.

The doctor shook my left hand, told me that the break still didn’t need surgery, and suggested that I come back in a month.  I thought about that.  Can I use my arm, I asked.  He said, You can bend it, but don’t  carry anything.  I nodded.  On the way out, I gave the lady my debit card for the $75 co-pay and waggled my nose at the little boy, now clinging to his mother’s arm and rolling the eraser around with his tongue.  He burst out laughing.  His brother had a pink cast.  A nurse patted his head and said, I know it’s the wrong color, and the boy did a one-shoulder shrug and said, I don’t mind.  I like it.  His mother beamed.

I sat behind the wheel of my car for a long time, staring at the crumbling brick of the building and thinking about the pain in my shoulder.  The doctor touched the spot where the bone now protrudes and told me that the bump would go down, eventually.

I looked at my left hand, where I once wore a wedding ring.  When I fell on 63rd street, I screamed at the ER nurse who wanted to cut the ring off.  My husband will kill me!  I yelled.  He paid a fortune for this thing!  She put my crushed finger in a bowl of warm water and I eased the diamond over the knuckle.  After the surgery to put the shattered bone back together, the therapist said not to resize my ring for a year.  I got divorced before then, so it didn’t matter after all, except in some weird alternate universe where I still stand over sudsy hot water, vomiting from the pain and the pressure and the fear, clutching a diamond and sobbing, I got it off, I got it, he’ll be so pleased.

Today I walked for the first time without my cane.  I don’t normally use it.  Since my falls, I’ve felt that the extra help would be important.  But I gingerly stepped from my car to the grocery store, keeping my stance wide, holding my weak right arm close to my bruised ribs.  When I got to the checkout line, I asked the sacker not to load the bags too heavy.  Pretend I’m your grandmother, I suggested.  He rolled his eyes, and the cashier said, stop that.  The kid loaded my bags in the cart and shuffled over to the next line.  I whispered to myself, On a scale of zero to ten, how bad does that kid’s disdain feel?  I shrugged, thought about my mother offering up her cancer for the pain in my legs, and went out into the California sunshine.

It’s the twenty-eighth day of the sixty-ninth month of My Year Without Complaining. Life continues. 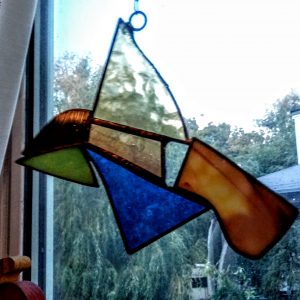 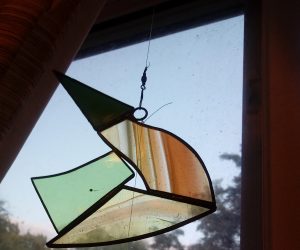 My son made these two stained glass pieces when he was at PS1 Elementary School. They hung in my kitchen window in Kansas City for twenty years or so.  Now they hang in the window of my tiny house.  I’m sharing the photos just for your enjoyment.