The downside of downsizing has a gnarly underbelly covered with skittering bugs.  But its upside — oh, the glory of it!

Stacks surround me. Pictures of the children who ran down this driveway; their scribblings; and the intricate portrayals of the dragons which they slayed teeter beneath the weight of rusty cars found under the guest bed and in the corners of closets.

Awash with emotion, I lift each memento.  I smooth the crumpled pages and shake dust from the fading surfaces.  There I find the young hopeful woman who bore a child alone; there I find the beginnings of crow’s feet around my eyes as I stand in a wedding dress; there I see the tension in my child’s eyes while his mother lies in a hospital bed.

As the uncertainty of my medical condition unfolded in the mid- and late-1990s, I explained to my child that “a bug bit me on the brain when I was a baby”.  That bug broke the nerves that tell my muscles what to do, I explained.  That’s why I walk funny.

I went on to describe the new reality.  I told him that the bug had been asleep, but now it had awakened and coursed through my body, causing new problems.  Dr. Brewer wanted to invent a medicine to fight the bug.  He asked me to help him by trying out that medicine to see if it would work.  In the meantime, the bug gave me asthma.

I didn’t explain that the “bug”, a virus called HHV-6, also creates a condition requiring blood thinner, but Patrick knew that all of us had to take turns giving Mom a shot.  The needle held heparin for my hypercoagulability.  At eight, Patrick could not have digested the complexity of the situation.  But this he understood:  Bug.  Asthma. Needles,  Fight.

He understood, too, that his mother constantly teetered on the brink of serious illness.  Time after time we rushed to the emergency room because I could not breathe.  I’ve often worried that the stress of having an ailing mother damaged him.  But I put that worry aside, in line behind all the other fears of my failure as a parent to this marvelous creature.

Yesterday, that bogeyman sprang from the closet and, like the bug, bit me in a tender place.  But with it came the soothing salve of some unshakable belief that my boy loved me enough to devote an entire page of his journal to an account of my rescue.

I’ve quoted this before but no more aptly.  In “A Thousand Clowns”, the main character recounts the incongruity of a bachelor suddenly finding himself the guardian of his nephew.  He frets over whether he has properly acquitted himself in the role.  He expresses a single, desperate hope:  That the boy will think well of me in analysis.

It’s the twenty-eighth day of the forty-fifth month of My Year Without Complaining.  Life continues. 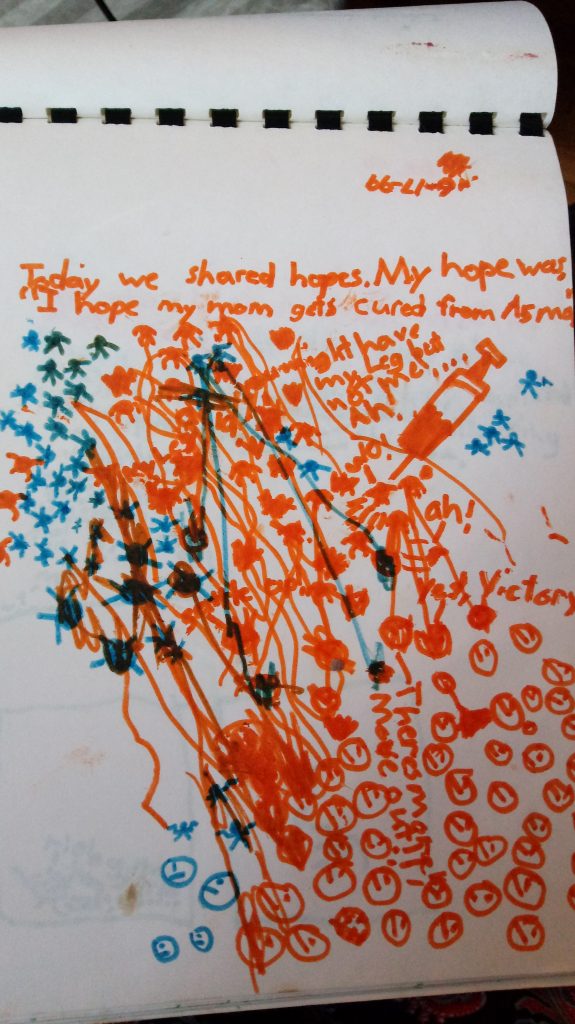