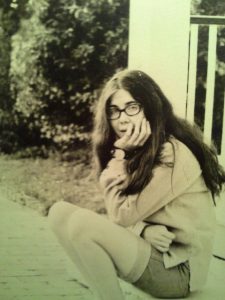 I spent a lot of time with my mother in my teen years.  Some click of the dial had brought a certain stillness to the chaos of our lives before the early 1970s.  I think perhaps my father left the house for a  year or two.  I remember my mother laughing more in those days.

We went to Vet’s Village in the city.  We picnicked in out-of-the-way turns just outside of the town where we lived.  Sometimes we had a brother or two in tow.  More often, Mom and I drove alone, to the Bissell house, to the art museum, to junk stores in central Illinois where she had lived as a child.  Once we drove to Blackburn College where she had done two years before starting nursing school in St. Louis.  We stood outside a closed gate.  She talked about converting to Catholicism and feeling independent for the first time.

In those days, nobody considered me to be ‘disabled’, a word which I didn’t hear until more than a decade later.  They said I had a ‘walking problem’, and that I could overcome it.  My mother sent me to tumbling lessons to learn injury-free falling.  She nixed dance classes but cajoled me into doing exercises.  She bought me solid, ugly shoes.  She told me over and over that I could conquer the clumsiness.  “If you walk every day of your life, you’ll walk every day of your life,” she intoned.  “So keep walking.  Don’t let them put you in a wheelchair.  Keep walking.”

During my pregnancy in 1990, a physical therapist suggested a walker to ease the weight from my aching legs.  Again I demurred.  You can’t lift your knees high and do that heel-to-toe step if you’re shuffling forward on a metal frame.  No, thank you, ma’am — do I need to sign a waiver?  An acknowledgment of your warning?

When a doctor told me that I had six months to live, I raised my eyebrows and shook my head.  I reminded him of my five-year-old child.  I can’t die, sorry.  I’ve got responsibilities.  That doctor passed away two years later.  I have, thus far, surpassed his prediction of my life expectancy by twenty-five and a half years.

I don’t disdain those who need gait aids or wheels.  Those devices give many a personal freedom of which they otherwise would despair.  I use a walking stick in strange places or when I’ve been working overmuch.  But I need to remain on my feet.  I have stood this long.  I intend to remain standing,  stay vertical, every precious possible moment.

This week brought the results of a major medical test for which I have been nervously waiting.  Strange symptoms that have plagued me for several years needed to be explained.  And so they have.  I read the words over and over, first in mild disbelief, then in shock, then struggling to breathe.  Inclusion body myositis.  Uncertain origins, hard to definitively diagnose without biopsy, progressive, sometimes genetically driven but more often not, film at eleven oooh ahhh ahhh.

I heard my mother’s voice:  Keep walking.  I felt the warmth of her smile.  I strolled again with her down the path at the Bissell House, with the fragrance of spring flowers wafting through the cool evening air.  I leaned against the railing and listened to her describe some plant in a side garden.  We couldn’t have been there alone; someone took the pictures.  But I remember only Mother.  A lightness rose within me as she let the day’s grime and worry fall away.

And so I shall.  CNS deficit from a viral encephalitis?  Check.  Spinal stenosis from degenerated disks?  Check.  Inclusion body myiositis?  It’s a mouthful but, also check.  I’ll put my best foot forward and just do what I do; and keep walking.

It’s the ninth day of the one-hundredth and second month of My Year Without Complaining.  Life continues. 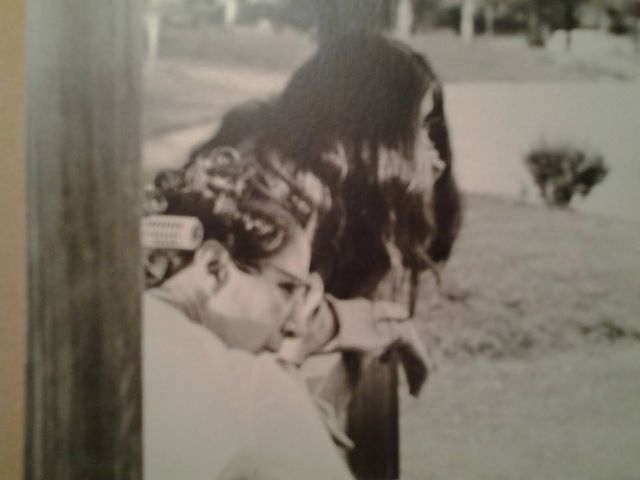 One thought on “Keep Walking”