We called it, “Pulling a Nana”.

One stood in front of a chore needing completion.  One clasped one’s hands in front of one’s breast and intoned with earnest passion:  “Nobody makes beds better than you do!  Will you make this bed for me?”

The person to whom such an entreaty flows cannot resist.  Small child, sulky teenager – no matter.  Beneath the weight of eager ambition, the task succumbs and the bed finds itself made “tight as a drum, neat as a pin”, so that Nana could bounce a quarter from its surface.

My mother’s mother suffered to a series of devastating strokes in my mid-childhood and died while I was still a young teenager.  She lives in my heart.  I remember sitting on her porch in Lake Knolls, after dark.  Nana wore her slip and her house-shoes. Cigarette smoke curled around her head.  She thought that sitting outside in one’s slip meant luxury.  In the new subdivision where they had built their house, there were few neighbors and none close.  No one could tell what she wore.  She smiled in the dark as Grandpa sang to the grandchildren gathered at his feet.  Johnny Jump-Up went to Sea. . . when he comes back, he’ll marry me.

The strokes robbed Nana of meaningful speech.  With her paralyzed arm, she would wave and say, “Der- der – der -“, straining to instruct me as to her wants or needs.  Mostly she stood silent, good hand clutching her three-pronged cane, eyes pleading.  She’d finally drag herself down the hall to get what she wanted but could not name.  I have never felt more helpless than watching her drink caster oil from a bottle, without the spoon that she had wanted me to fetch.

Nana bought my good shoes and helped me explore the world of classical literature in the stacks of the backroom of the bookstore next to the business which she and my grandfather owned, Sonotone House of Hearing.  She kept going through many crises, I know; the Depression included.  She loved fiercely; lived honestly; and cherished her husband, daughters, and grandchildren with an astonishing simplicity that I have not forgotten.  In fact, if my understanding is incorrect, I do not want to be set right.  I would rather remember her through my child’s eyes.

As I stumble around my tiny house, with my bruised ribs, my broken clavicle, and my summer cold, I strive to channel my grandmother.  I’m pulling a “Nana”, though; I texted a friend and told her (truthfully) that I trusted her to come help with my housework and not judge me.  She’ll be here at 1.  It was hard to ask, but I did it, and I think Nana would be proud of me.

It’s the seventeenth day of the sixty-ninth month of My Year Without Complaining.  Life continues. 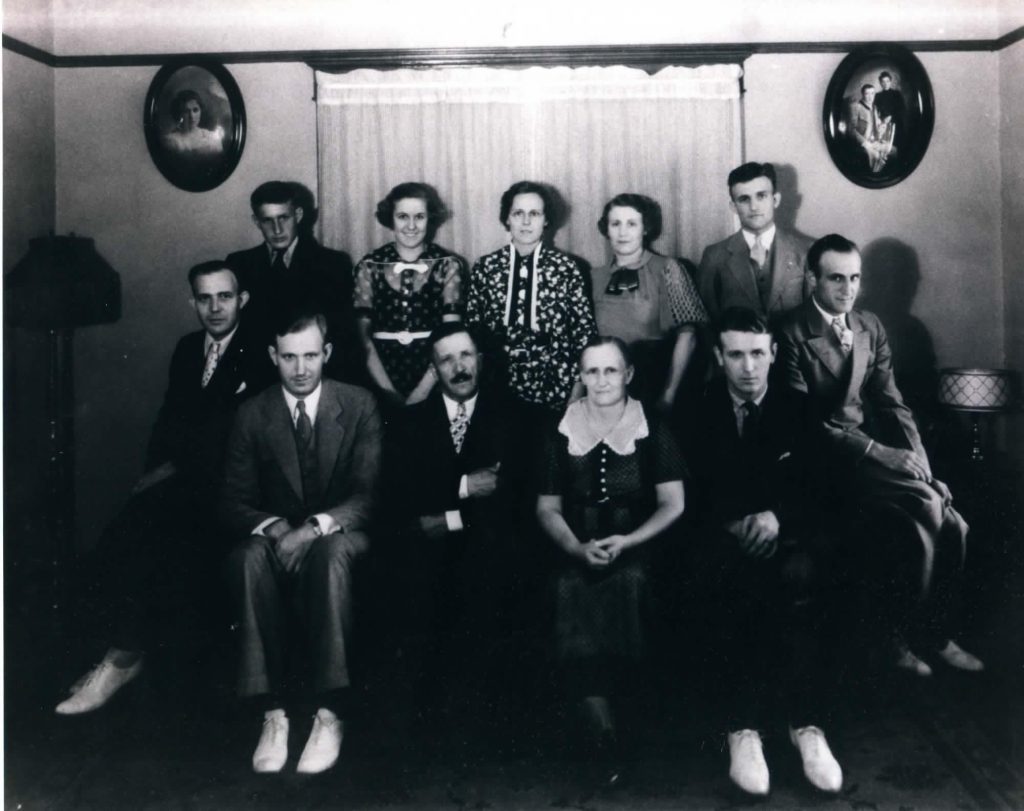 My maternal grandmother and her family of origin: John, Conrad Sr. (my great-grandfather) known as “Dad”, Bibiana (my great-grandmother) known as “Mom”, Raymond. Second row on either end: Cooney (Conrad Jr) and Adalbert. Top row: Lawrence, Isabelle, Bibiana, Johanna (my Nana), and Frank Ulz. Gillespie, Illinois.  Thanks to my cousin Adell Ulz Morton (daughter of Lawrence, so my mother’s first cousin)  for the identifiers.