I woke with resolve.  I had delayed an unpleasant task long enough.  I hastened through morning ablutions, scrambled eggs, and the drive through the Delta to work.  At 8:10, alarm deactivated, coffee brewed, and computer booted, I dialed the number to my eye doctor.

I leveled my voice for the opening volley.  Glasses ordered in June, arrived mid-July, immediately reported as incorrectly made.  Confirmation; re-order; retrieval of the second, back-up pair.  Request for prescription re-check delayed due to vacation.  Now I’m back.

Let’s see.  You ordered your glasses in June and got two pair.  Now you want more?

I gritted my teeth for twenty-five more minutes before the demands of work summoned me.  At noon, I tried again.  Same recitation, different call-taker, same result.  It’s more than ninety days since you got your prescription, you have to pay again.  A stutter crept into my voice as I tried to control my frustration.  I repeated that they had taken six weeks to make the first pair; eight weeks to see me about the problems; ten weeks to get the second pair and it still isn’t right, and I still don’t have the remake of the first pair.  Stonewall.

Finally, a supervisor came on the line.  Although she took the same position as Nameless Voice One and Nameless Voice Two, she at least condescended to make an appointment.  All the while, I held the frames of the second wrongly crafted lenses at a slant so that I could peer at the monitor through the bottom of my tri-focals, the place through which I should be able to read a book.

At five-thirty, I got behind the steering wheel and headed home, after a brief stop for bottled water.  On Jackson Slough Road, I trundled along, a field to my left and Mt. Diablo on the far horizon to my right.  A utility truck lumbered past, followed by a rickety RV pulled by a shiny yellow Ford.  I slowed for a turn and chanced to raise my eyes.  A red-tailed hawk peered downward from a high wire.  I let my car roll to a stop and raised my cell phone.  He held still for the ordeal.  He did not flutter a feather or raise a wing.

A few miles later, I pulled into my parking space.  I sat for a bit, gazing at the empty lot to the east of my tiny house.  In the stillness of my car, I contemplated the vagaries of human migration.  Some of us choose to tug our roots from the ground and shake the dust away; some of us migrate to flee the rot which entwines itself around the tender shoots that we lift to the nourishing rain.   I thought about my traveling neighbor and his little bird.  For the months that I had them just outside my door, I spared them no more than a few moments of conversation.  Funny how we take people so much for granted.

I got out  and glanced to the west just in time to see a blaze of gold through the telephone wires.  The wind rose around me, sending a shiver down my back and tossing the leaves in the tall California oaks.  I closed my eyes and felt the evening settle soft and easy on my shoulders.  Then I went inside and closed the doors against the gathering darkness, resolved to make a simple meal and then to rest my weary body.

It’s the twentieth day of the one-hundred and fifth month of My Year Without Complaining.  Life continues. 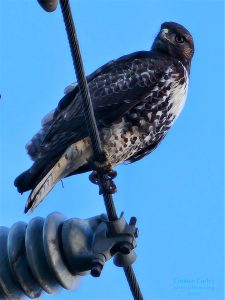 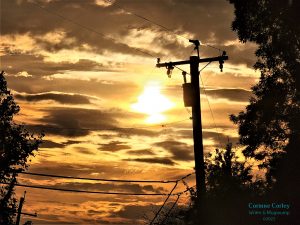