At eighteen months, I sat down on my bottom and said, “I no walk anymore, it hurts, Mommy.”

At five, I earnestly recited “I think that I shall never see / A poem as lovely as a tree” one Friday, for which accomplishment my best friend took credit on Monday and received the teacher’s last gold star.

At eight, I walked the streets at midnight with my brothers and sisters as my mother sang church songs while my father raged and smashed dishes in the living room of our home.

At ten, an older boy jabbed me in the crotch, saying, “Ah, a ripe one”, to my everlasting embarrassment as my little brothers helplessly watched the tears fall on my flushed face.

At thirteen, I huddled in a bathroom stall listening to classmates ridicule my walking, my flat chest, and my crooked teeth.

At sixteen,  I shuddered as my mother announced to my relatives that she assumed I would never be able to wear her white wedding dress.  To this day, I cannot say whether she didn’t think I’d ever marry or thought I had already lost my virginity.

At eighteen, I bowed my head listening to a doctor pronounce that I would be bedridden by twenty-five.  That same year, I screamed all night as I withdrew from an addiction to the Valium which that same doctor had first prescribed for me shortly after my fifteenth birthday.

At nineteen, I submitted to a popular fraternity boy’s determination that he conquer my body as part of his initiation.

At twenty-one, I fled St. Louis, hoping for a fresh start on the Eastern Seaboard.

At twenty-two, I huddled against the passenger door on the long drive home from Boston.  A few months later, I had my first miscarriage on the floor of my mother’s bathroom.

At twenty-five, I learned about infidelity in the doorway of my own bedroom, when I came home early from my first day of law school.

At not-quite-thirty, I watched my mother’s coffin lower to the ground and stared across the rend in the earth into my father’s bleary eyes.  I saw a reflection of my own, and made the decision never to use alcohol as a crutch again.

Two months shy of thirty-six, I finally gave birth to a child for whom I have not been the most perfect of mothers, by a long shot; but who, nonetheless, has turned out to be an amazing man.

During his life time, I have married and divorced two more times; and some other stuff happened — like —

—-  I successfully asserted a claim against the Catholic Diocese of St. Louis on my own behalf. . .

. . . and I championed the cause of scores of abused and neglected children, who reminded me so much of my self and my siblings that I can only hope to lay claim to a piece of their redemption. . .

. . . and I wrote a thousand pages, a million words, a sheaf of bad poetry, all looking for some answer buried deep within me.

At fifty-eight, I weaned myself from prescription opiates after forty-three years of using narcotics for pain.

At fifty-nine, I stood silent in the face of an accusation that I was too broken to love.

At sixty-two, I walked away from a haphazardly comfortable life cobbled together from bits and pieces, and began anew two thousand miles away on the edge of the world, within breathing distance of the Mother sea.

At sixty-four, I looked into the mirror and for the very first time smiled without reservation at the woman whom I beheld.  Despite her broken clavicle, her wobbly legs, her solitary status, and the paucity of material goods with which she surrounds herself,  she seems at long last to have everything she needs within her reach.

It’s the twenty-third day of the sixty-ninth month of My Year Without Complaining.  Life continues. 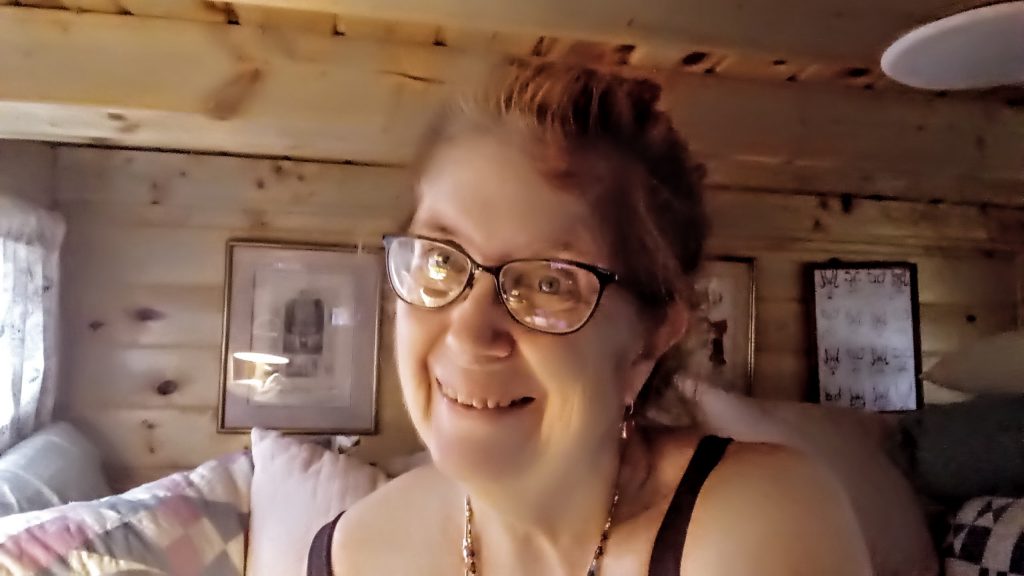 For the last two weeks, I’ve had to do most personal chores with my non-dominant hand due to my right clavicle being broken.  I did a search for “combing your hair with one hand”, and found an amazing number of videos from which I did take some good tips.  The one which I found the most inspiring is HERE.  By inspiring, I mean in the damn-girl-I’ll-never-bitch-again sort of way.  Watch it, you’ll see what I mean.  I also watched THIS and THIS. From the second of those, I figured out how to clip my hair right after I got out of the hospital.

All three of these influencers struck me as incredibly brave.

In the above-appearing picture taken this morning, besides a goofy smile, I wear my first one-and-a-half-armed French braid.  Pardon the strap slipped off my broken ‘beauty bone’ for comfort.