Just like that, I’ve turned sixty-four.  I learned that people do indeed still need me, and, thanks to my sister Joyce and my friend Jeanne, I know that they will also still feed me.

Over my shoulder, the Missouri winds its perennial way in wide arcs around the city of St. Charles.  In a little while, I will trade my computer bag for the camera case and walk down to its banks.  I want to capture a glimpse of the river of my childhood for my friend Demi, who daily shares such glowing images of hers.

A half-hour east of here, the Missouri flows into the Mississippi.  At the confluence, the charming ghosts of my younger self and her brothers scamper ahead of a weary woman who has put aside her cares long enough to entertain the second half of her brood.  She rests on a bench while they gather the debris of a picnic lunch.  The autumn sun shimmers on the water; the treetops sway in the healing breeze. On the way home, the kids will beg for one last glimpse of the Piasa bird.  The woman will complain, but she’ll stop anyway.  She’s like that.

The memory of her generosity has not faded, more than fifty years gone.

My perfect Birthday Bash & Benefit for Rose Brooks Center continues to garner online donations.  We won’t know the total for a few days, but from what I can see, we’ll surpass my expectations for this modest version of the earlier events.  I’m already planning for 2020.  I tried to count the attendees  in retrospect.  I found 39 to tag on Facebook, and many of my friends disdain social media.  Still others brought spouses, friends, partners, or children.  The steady flow from beginning to end guaranteed that survivors of family violence know how much we care about their recovery.  I could not be more pleased.  I always fear that my events will fail.  The first half-dozen appearances mean the most.

Thanks to the $64.00 worth of raffle tickets donated to me by the lovely Ms. Vicky DeStefano, I won the pearl necklace.  I snatched it without shame.  Its smooth surface had transfixed me when the raffle maven slid it from its velvet bag.  I stuffed every one of my gifted tickets into the bucket in front of the beautiful bauble.  Karla, tending the table, warned everyone that I had done so.  Other prizes might have had a higher retail value but none pleased its winner more than this.  As a second gift, I claimed a copy of “Naked Toes”, the volume of poetry by Sara Minges.  I feel quite victorious.

Gazing on the pile of birthday cards which I collected as I greeted my guests on Thursday, I realize that this might be the best birthday ever.  What more could a woman want besides having sixty of her friends come to a benefit for her favorite charity, hug her on their way into the room, and sing Happy Birthday with the band?  Throw yourself a birthday bash, people; as long as you include a charitable component, people will come.

As I gather my gifts to safely stow them for the various side trips which I’m taking before heading west, I recall a book which my mother had us read decades ago.  Its plot followed an imaginary time traveler who came into the time of Jesus Christ and found him to be a simple child, plagued with something unidentified which caused mental retardation.  The protagonist, a devout Catholic from the 20th century, felt compelled to follow in the steps of the Biblical Christ, unto the Cross, not knowing if he carried anything like the divine spark which would let him rise, reborn, on Easter morning.  He put a great deal of faith in the God of his youth.  The name of the book?  Pearls Before Swine.

I have no fear of making such a mistake as casting any cherished thing before the unappreciative.  Only pearls surround me; there are no swine among the faces in this crowd.

It’s the seventh day of the sixty-ninth month of My Year Without Complaining.  Life continues. 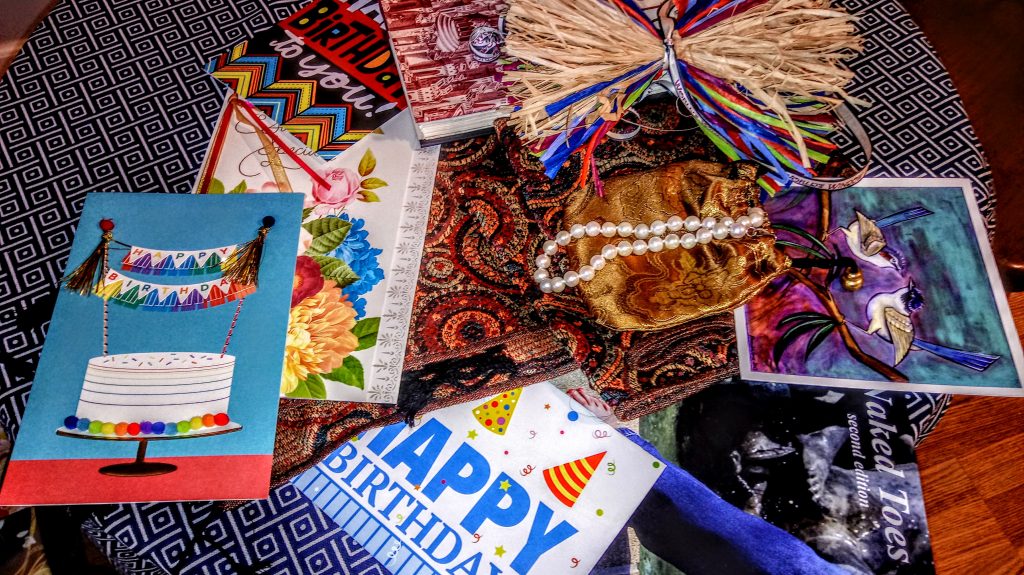 Many Happy Returns of the Anniversary of Her Auspicious Birth to Jane Williams; and to my heavenly aunt Dode, aka Joyce Lyons Orso.  Two fine woman who share a birthday!

My thanks to everyone who honored me.  I love you all so very much.

Stay tuned for a final tally of the proceeds of the benefit for Rose Brooks Center.   It’s not too late to donate and be included in the benefit total; just click on the DONATE link at their website, and tell them it’s in honor of the Corinne Corley Birthday Bash & Benefit.

Or give to a center in your town.  Or volunteer.

If you or anyone you know struggles with the terrible burden of family violence, the National Domestic Violence Hotline can be reached 24/7/365 at:

One thought on “All Pearls / No Swine”