I entered this world on Labor Day, to the amusement of my father and the slight disgust of my mother who did most of the hard work.  By contrast, my son made his appearance on Not-Labor Day.

A mild feeling of anxiety suffused my body early in the morning of 06 July 1991.  I called a friend who came to sit with me in my small apartment in Fayetteville.  She curled in a rocker as I fidgeted.  Sit, she encouraged.  You’re making me nervous.

With a primary C-section scheduled for Monday morning, I intended to spend my weekend getting the nursery ready for the bundle of joy we’d taken to calling Buddy.  I had no name for him, since I had been expecting a girl whom I intended to call Elizabeth Lucille Johanna.  A technician spied the telltale anatomy in a sonogram at twenty weeks.  For the next three months, I fretted about details like the color scheme of the crib bedding and how you potty-train a male child with no man in the house.  I did not think about a name.

Paula said, Sit down, and let me rub your hands, they look swollen.  I obliged her, easing my middle-heavy frame onto the couch.  She got me a cup of herbal tea and smoothed my long sheath of tangled hair.  Maybe it’s contractions, she suggested, from the vantage point of having been through this several times.  I felt my heartbeat accelerate as she called my doctor and described the situation.  Then she got my small bag and murmured, She thinks we should come ahead.  Before I quite knew what had happened, I was in a gown on a gurney and the Irish lilt of the midwife had taken the place of Paula’s deep voice.

Twelve or thirteen hours later, I learned the meaning of unproductive labor.  Someone administered a shot and I drifted off to the sound of rubber-soled shoes passing in the corridor.

By Sunday morning, the milder twinges had subsided.  My belly had gone back to the round hardness of thirty-four weeks gestation.  Paula sweetly smiled and walked beside me as the attendant pushed the wheelchair down to the hospital entrance.  We called it a dress rehearsal.

I returned in earnest on Monday, with my law clerk Ron Barclay and his wife Laura Barclay in tow.  Laura scrubbed and gowned, to take her place beside me in the operating room.  I got prepped and prodded and poked and pricked.  The epidural relaxed me.  Chilly air surrounded us while we waited for the doctor.  Then she rushed into the room, apologetic, pulling her mask back, reaching for the first instrument.  The counting and the cutting began.  Every layer brought a round of checking for instruments, into me and out of me and as they stitched me.  Between the manic assurances that no foreign objections had fallen into the fleshy abyss, a sudden rush and a huge pop forced air and blood and muck out of me with an astonishing rapidity.

At 1:50 p.m. on 08 July 1991, Dr. Elizabeth Wagner and the midwife Moira eased my son’s body from the slit they had made in my mid-section.  One of them gently cleared his airways. I heard a sort of coo, and the medical people visibly relaxed.  My son entered laughing.  They laid him on my chest as Laura beamed and I thought, over and over, what a miracle had just happened.

In thirty-one years, I’ve been all kinds of mothers:  The nervous kind, the worried kind, the stumbling kind, the surest kind.  I’ve laughed, I’ve cried, I’ve stood on my porch in the deepest dark of a silent night and sobbed.  I’ve wondered, I’ve marveled, I’ve prayed, and I’ve despaired.

But I have never once regretted anything, except, perhaps, my own ineptitude.

In less than an hour, Central time clocks will chime midnight, and it will be 08 July 2022.  In the middle of the coming day, my son will turn thirty-one.  Although I will not be in Chicago to celebrate with him, my heart always holds a place in which such celebration occurs.  I will go about my day as I always do, busy and hurried for the daylight hours, quiet and tired come evening.  Through every minute, my spirit will soar.  For some reason that I cannot begin to fathom, the universe gifted me with the incredible, incomparable gift of being Patrick Corley’s mother.  If I do nothing else good in my entire life, I will happily lay myself down assured that I have given one gift to the world as precious as that which I received.

Whatever I hoped my son would become, Patrick has surpassed those expectations.  His gentle  heart does not judge.  He puts his mind and his hands towards helping others.  He fights injustice.  He appreciates beauty.  He formulated strong ideals and honors them.  He has made of himself a better person than I could ever have hoped to produce.  He has done me proud.

It’s the evening before the eighth day of the one-hundred and third month of My Year Without Complaining.  Life continues. 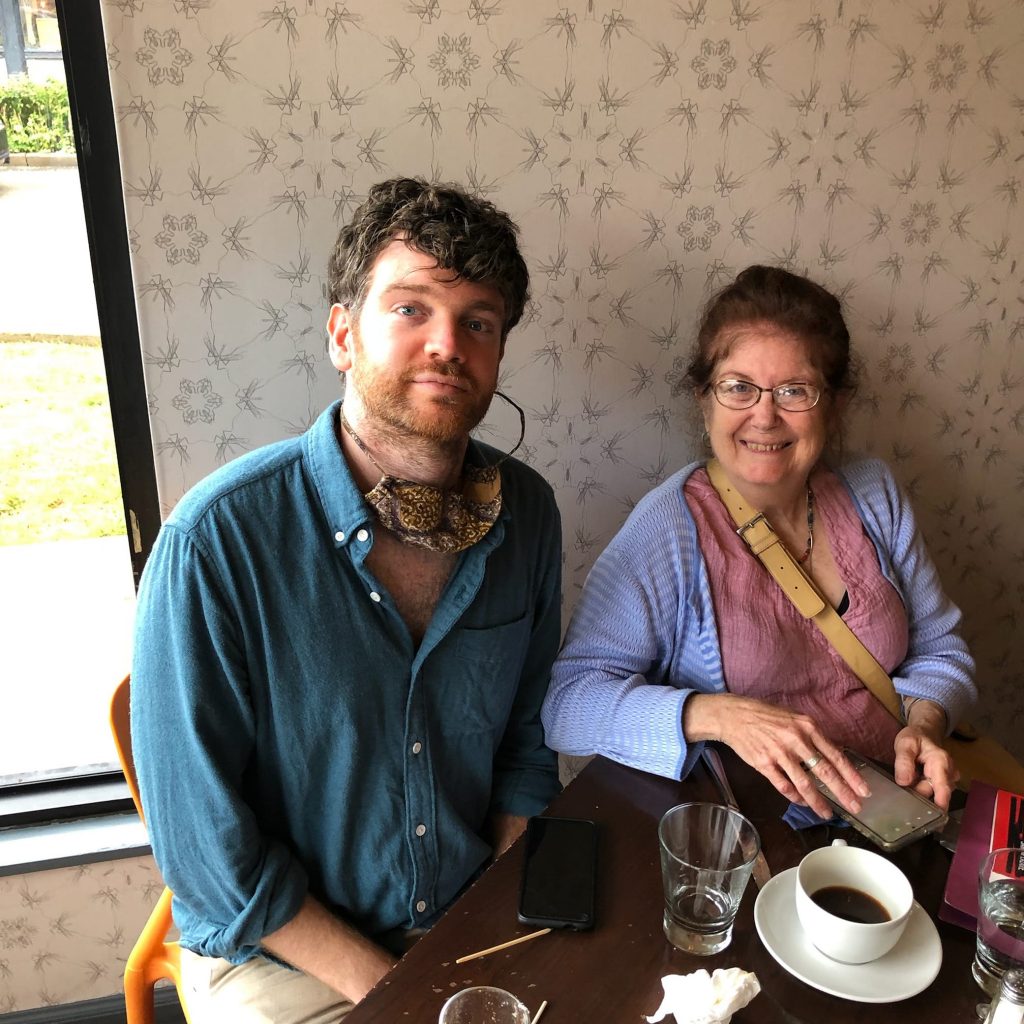 Patrick Charles Corley and his mother, taken in September 2021, in St. Louis, Missouri