I rounded the corner in the local grocery store and knocked over a plastic sandwich board.  The snap reverberated in the back aisle.  Two women glanced at me as I struggled to recover.  One walked over and eased the sign from the floor and leaned it against the endcap by which I stood.  From behind her mask she seemed to smile; her eyes held a light which spoke of kindness.

Just a sign, she said.  Wet floor.  She gestured.  I babbled something like thanks, mumbled a lame explanation for my own inaction, and moved my cart out of her path.

The other woman pushed a stroller and carried a hand-basket of produce.  Her baby made that raspberry noise which delights new parents and aunties everywhere.  I leaned a bit closer and admired his rosy cheeks, observing but not mentioning a certain telltale combination of roundness and slant which suggested Down’s Syndrome.  Beautiful boy, I remarked, without pretense.

I don’t know a lot of people in Rio Vista; or perhaps I could more accurately observe that I know a lot of folks but not by name and not well enough for a dinner invitation.  In the Delta, ten miles can mean two draw bridges, a county line, and an eon’s gap in mindset and lifestyle.  On the Delta Loop, folks live in trailers, mobile homes, RVs and converted summer houses.  Some bunk on their boats; others escaped the landlocked Midwest in 24-foot tiny houses built on five-thousand dollars worth of rolling steel.

But in Rio Vista, people pride themselves on two-story frame houses handed down through generations or the newer sprawling brick of quiet subdivisions.  When they ask where I live, their heads tilt, they repeat, Out on the Loop, often with mild incomprehension.  Their curiosity rises if I describe my house, but they still move with caution.  Like on TV?, they ask, in the voice one might reserve for questioning someone with a rare disease that you’re not quite sure if you can catch by standing too close.

So usually I keep myself to myself while I wheel around the store.  I smile at the children and thank the odd tall person who rescues me from boxes and bottles beyond my reach that threaten to bonk my noggin.  Yesterday, though, the mask lady and the mother seemed to be following my course from aisle to aisle.  Invariably they smiled; the baby cooed and blew bubbles; and I made a few comments about his incredible cuteness and being a boy mother while his father hovered with a watchful eye.

At the checkout stand, I studied my groceries with more emotion than seems prudent for a weekend food purchase.  Yet there I stood, behind the items piled in the place where I might have once buckled my own son, thinking about dinner for one, breakfast for one, lunch for one.  I looked at the little boy in his stroller, now clutching his feet and tooting a song through pursed lips, laughing between choruses.  His father stood more easy now.  I remarked again on how adorable I found his son.  The child thanked me with the loudest toot yet; and everyone around him beamed.

My mind flashed to an image of my son in our Brookside grocery store.  Two and a half, sitting in my cart, waving to everyone around us.  Later, in the car, he said, Mom, you tell me not to talk to strangers, and you do it all the time.  I assured him that parents have different rules; we’re safer, we can take care of ourselves, while little boys might get hurt if the stranger isn’t a good person.  He thought about that in silence for the short drive to our house.  As I unbuckled his booster seat, he patted my cheek.  Don’t worry, Mama, he assured me.  I won’t let anyone get me.  I’ll only talk to nice strangers.

Somewhere in Chicago, his city of choice with its own Loop, my son moves among people that might be strangers, that might be nice, that might wish him harm or might have his best interests firmly in mind.  Here in California, a little boy and his cheerful mama and proud papa wake to the radiant sunshine of a sunny spring day.  In a park beside a levee road, one county over, I heat yesterday’s coffee and stare at the empty lot to which my tiny house will be moved in a week.  My scrambled eggs grow cold on the plate as I wonder what to make of it all.

It’s the eighth day of the one-hundredth month of My Year Without Complaining.  Life continues. 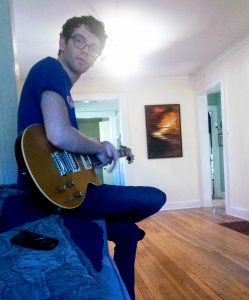 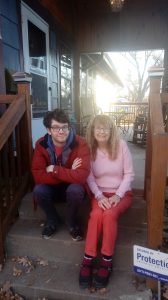 My son and I on our last visit together before our house sold.