I enjoy a good thrift trip but I don’t allow myself many given that I downsized from 1400 square feet to a house too small to swing a cat if you were so inclined.  But yesterday, I had an hour to spend as I pleased, so I shambled over to the Lodi Goodwill and browsed to my heart’s content.

As I wheeled my buggy toward the books, I paused in front of a stack of baskets.  I studied a few rectangles, reflecting on the disorganization of my open shelves and wondering if baskets might be the way to go.  Suddenly, a voice rose over the hum of the religious satellite station.

I’m cruising for a few last items before the flea market tomorrow, I heard.  I’ll set everything out on tables and put prices and people can buy ’em or not, whatever, at the end of the day, I’ll take whatever’s left and box it.

The voice grew louder as the guy approached my spot clutching a black phone oddly evocative of the Blackberry which I carried in the 90s. The party on the other end cackled.   Yeah, yeah, found some good stuff here, these people got no idea what they’re selling for cheap.  The two shared a raucous laugh as the man muscled beyond my cart without excusing himself for having just bumped me.

My eyes lifted and met those of the customer standing around the corner looking at movies.  He shook his head.  I smiled, no doubt a little ruefully.

Some people shouldn’t be allowed to use speaker phones, he opined, though mildly and without rancor.  I laughed in response and rounded the bend, gently easing myself behind his slender figure and positioning myself next to him.  I glanced at the DVD in his hands.  Looking for something to watch while you stay out of the heat, I asked.

His face crinkled into a gorgeous grin.  I studied the warm brown of his weathered skin, the lines of middle-age, the crisp white T-shirt and the faded, basic blue jeans over work boots.  Something in the way he stood seemed familiar, though not in the sense of personal knowledge.  He resonated with a familiar home-town vibe.  I took a chance.

But these Californians, they’re kind of weather wimps, I said, flashing a brief smile to take the edge off my snobbery.  Where I come from, 102 would be an every day thing by May, not one weekend in late July.

If possible, he beamed brighter.  He gestured to his chest.  Chicago, he noted.  I chortled and exclaimed, St. Louis and Kansas City, but my son lives in Chicago!

We  established our mid-nation bonafides, compared movies with books, shared our relative lengths of time spent in NORCAL, and speculated about what drove each of us west.  At a certain point, the conversation felt right and I tendered my name.

Arthur, he responded, and clasped my hand in both of his for a few precious moments.

After a few minutes, we said goodbye, wishing each other a good day.  I continued with my quest for something to read on a lazy Sunday afternoon while the laundry spins in the combo unit.  Too late, I wished that I had taken a picture of the two of us or given him my phone number.  Nothing provocative, mind you; just another friend of which, as I’ve always said, you can’t have enough if they’re quality stuff.

I bought a few things — a little cream-and-sugar set for $1.99 that turned out to be worth some real change when i later researched; five books; a bowl to replace one that I had thought might be china which turned out to be plastic and cracked.  I like the feel of certain shapes:  smooth stoneware, rounded and cool; a slender mug handle, easily grasped as I move out onto the porch in the early morning; and the sturdy grip of a fellow Midwesterner, in a chance encounter at the Goodwill, on a Friday afternoon while I’m stuck in Lodi again.

It’s the twenty-seventh day of the sixty-seventh month of My Year Without Complaining.  Life continues. 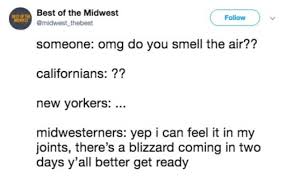 Note: As far as I knew at the time, I was only stuck in Lodi because I was waiting to run a time-sensitive errand.  Only later did I learn that the bridge over the Mokelumne had been closed all morning and I really was, in fact, stuck in Lodi again.  I got out during a brief spell of allowing traffic through before they closed it for repairs.  Island life means something different here in the Delta. 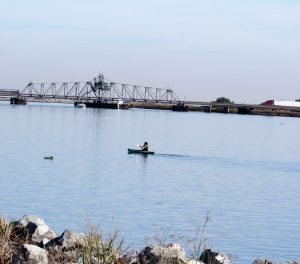 The bridge spanning the Mokelumne River just east of the turn onto Highway 12 from Brannan Island Road.