With a long glance, I gauged the hazards between my car and the front door of the Lodi Sprouts:  Two lanes of traffic; yellow bumps installed for the sight-impaired but deadly for the propiosensory-impaired; a clutch of scampering children; and three women with their heads bent over cell phones scurrying across my path.  I tensed.  I started forward.

On the far side of safety, the same bearded gentleman who always offers me a motorized shopping cart did so; as usual, I declined with a hearty joke about my driving skills.  He wheeled a small buggy in my direction and I headed for the front section of the store, where I find my favorite gluten-free Norwegian flatbread.

A tall man, a customer by the look of him, with amazing steel-framed glasses and kind eyes stood behind me.  I ventured a vague smile and said, Yes?

Pardon me, he said, in a tone so earnest it would have convinced the grumpiest of old men to forgive the interruption.  Please, may I ask where you got your jacket?

And I was instantly transported back in time.

My heart has been severed in two.  Half still beats, the half in which my son dwells.  The rest has been wrenched from my chest and trampled.  For a third time, a marriage has failed, promises have been dishonored, and I have been left alone.  This time, I have no hope of healing.  This time, even I know that only cauterization will stanch the flow of life’s energy.

My son comes home for Christmas.  I’ve done the impossible.  I’ve summoned as much energy as I can.  I’ve marshalled presents, and decorations, and invitations to the places where we have been welcome all of his life.  Friends who had been neglected during the five years of my marriage to someone who admitted to dislike of them had welcomed me back into their fold.  Women encircled me as I cried.  My father-in-law had succ.umbed to cancer; divorce loomed; I had no recourse but to reinvent myself.  My loyal friends stepped forward to remind me of what I had been, and how much they loved me.  But I remained desolate.  Not enough time had passed; I had not yet started down the road to anything resembling acceptance

I felt sorry for myself but even sorrier for my son, who had been through this with me not six years prior.  He did not deserve to once again become his mother’s keeper.  He had his own life to live.  But he came.  He threw his duffel onto the cedar chest at the end of his restored bedroom and cheerily suggested a shopping trip and lunch in Waldo.

Among other places, we went to one of our favorite thrift stores.  There, I lingered in women’s clothing.  I tore myself away from a lovely jacket and scouted for Christmas trinkets with which to decorate packages for the grandchildren of the two households which we would visit.  Patrick found a few things; we rendezvoused at the cashier stand and continued our afternoon outing.

My son never ceases to surprise and delight me at Christmas; and that year did not spoil his record.  In one of my packages, I discovered the jacket which I had resisted buying.  I had no idea that he had followed me and snagged it.  I touched its delicate surface, marveled at its bright colors, and held it to my face to breathe the scent of silk.  “It’s perfect,” I told my son.  “Exactly what I wanted.”

The tall man behind me at Sprouts patiently waited for my answer.  My son gave it to me, I told him.  He asked, of course, where my son had gotten it; and I told him, At a thrift store back home in Kansas City.

The man beamed.  He told me how much he liked my jacket, how much he would love to have one just like it to give as a gift, and how great I looked in it.  I told him, in turn, that I liked his glasses.  Your son has great taste in coats, he remarked.  I agreed. I said, And my son would love those glasses, too!  He grinned.  He told me to have a nice day, and to stay safe.  I wished the same for him.  We parted.  I ran my hand along the hem of my jacket, straightening its lining and adjusting a button.  I noticed that my heart had begun to dance within my chest, a full unbridled dance, the kind that one can only successfully pursue with whole-hearted conviction.

It’s the twenty-fifth day of the eighty-fifth month of My Year Without Complaining.  Life continues. 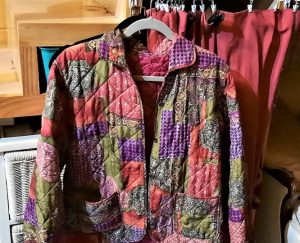 Friends:  Please forgive my lapses.  I injured my arm and keyboarding posed perils.   I limited my computer work to money-earning efforts and took 4 days off entirely.  I have healed considerably.  “I’m BAAAAACCKKK!” Thanks for reading and please feel free to comment.