A ten-year-old kneels on a newly-concreted driveway, staring intently at the swathe of hardened surface with a smattering of embedded gravel.  Pinched brow tops pursed mouth.  Behind her, a fidgeting five-year-old begs for access to the fascinating sight.

What is it, J-Bear, what is it? The girl uses the older child’s nickname, possibly in an effort to appeal to her better side.  Finally, the older one relents.

A Pretty Rock, she responds.  It’s mine.  And she moves aside to let her little sister gaze upon the triangular contours of the black, shiny nugget frozen for time in their driveway.

The exact dialogue might never be known, though if memory serves, this account closely parallels what those two children said to one another sixty years ago.  Eventually, Joyce agreed to share Pretty Rock with me, although a lesser, tarnished, misshapen variant deeper into the side-ditch officially became “mine”.  We stared at those rocks all summer, while we made postage stamps from the toy Singer sewing  machine which we stuck to envelopes with tar from the hot street.

For my entire life, I have depended on  my sister Joyce.  She taught me so many things, not least of which is to have faith in myself, something with which I constantly struggle and regarding which she still must regularly (though gently) remind me.

She administered  mundane lessons too.  She gave me my first eye shadow and showed me how to apply it to my lids, the knack of which I never acquired and eventually abandoned.  Shaving my legs went a similar route, but she taught me the process and I employed it until my mid-40s when a nick sent my thinned blood coursing down my legs.  My then-husband, exasperated, told me that he did not care and I should stop. Other talents she attempted to impart met with similar silly ends.  I am grateful, nonetheless, that she took the time to school  me in the expectations which society imposes on the female of the human species.

These lesser tricks and tips pale in virtue by comparison with my sister Joyce’s unfailing loyalty.  She has been at the other end of phone calls about all three of my failed marriages, my struggles to single-parent, my health worries, and my plunges into emotional decline.  Though I did not always share my darkest hours with her, I know that I can.  My secrets could not have a safer harbor.  My fears diminish under her soft touch.  She leads the loudest cheer.  She praises the smallest gain.  She finds the silver lining within the most frightening of storm clouds.  She condemns anyone who fails to appreciate me; she enthusiastically embraces those who share her belief in me.  When nothing can be done about a situation which troubles me, she sits on the other end of the phone and simply listens as I cry.  When the sobs diminish, she deftly guides me back to the bright side.

Having a sister means that you will always have a friend.  She will not always agree with your choices, but she stands by you regardless of your idiotic decisions.  She praises the slightest progress.  She challenges your self-doubt.  She dares the world to harshly judge your efforts.

My sister also honors me with her own confidences.  The street between us goes both ways and sees frequent travel.  I know some of her pain; some of her passions; some of her purgatory.  I know who has hurt her, and woe unto he, should our paths cross.  I know how much she sacrifices if she cares about someone; what she does for her daughter and others in the family who need her talent and attention from time to time.  I know the lengths to which she went for the children in the classroom where she taught for nearly forty years.  I’ve heard her anguish over the special children whose care she assumed now that she is “retired”, a word here meaning taking one’s two Master’s degrees and lifetime of experience teaching autistic children and applying the resultant capability to a half-dozen part-time jobs.  She works harder at 70 than I did at 20, and she drops into bed weary to the bone but happy that she has made a difference in the lives of children who call her “Miss Joyce” and cannot survive a day without her tender tutelage.

My sister Joyce has faults, as we all do.  In fact, we share many.  Our commonly damaged neuropathways carry similar scars from what we saw, suffered, and survived as children.  When one of us sinks into the dangerous quagmire of that past, the other reaches a hand into the breach and drags us back into the sunlight.

A handful of friends have stood by me through thick and through thin.  I’ve thanked those friends, publicly and privately, for the rescue.  My sister Joyce deserves sixty-five years of commendation, for carrying her baby sister into something resembling a tolerably pleasant late-middle age.  She’s an angel.   Without her, I would have despaired.  With her, hope endures.

My sister Joyce travels to California tonight, to spend four days with me.  I could not be happier.

It’s the second day of the eighty-eighth month of My Year Without Complaining.  Life continues. 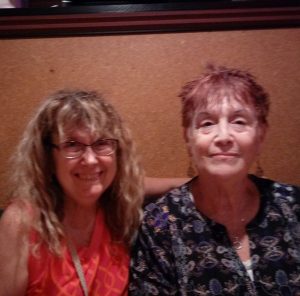 it isn’t blood that makes you my sister
it’s how you understand my heart
as though you carry it
in your body.

One thought on “My Sister, My Friend”