For the last week, I have anguished over the proper way to acknowledge a grief to which I have no actual entitlement.

I have walked this road before now.  When my mother-in-law died in 2013, I felt both bereft and grim, as though my desperate efforts to forestall her decline into dementia had so wholly failed that I caused her demise.  In my then-husband’s anguish at the loss of his mother, he snapped that I had no right to feel so bad.  I did not lash back at him; I understood that grief manifests as anger.

But I had to concede my once-removed status.  I retreated into a lonely shell.  I sat at my computer, raised my hands, and typed my sorrow onto the blank screen.  Joanna remained as real to me as before her death, as real as my short three years as Ruth to her Naomi allowed.  Though I had no strong claim to heartache, still, it haunted me.

Now I find myself in the throes of that strange feeling again.  A man has died, whose full name I cannot publicly acknowledge because my ethics prohibit that disclosure.  I became acquainted with him when the California law firm in whose back office I spend my work-a-day life helped him become conservator to his wife.  I sat in the conference room and explained the process to them; she with her lovely, vague smile, and he with his furrowed brow and the heavy burden of her declining state.  She reminded me of my mother-in-law.  My instinct to protect her prompted a strong diligence to which her husband responded.  He understood my need to bolster his effort to make his sweet lady’s life as quiet and orderly as possible.

A few months after we completed the case, the lady died.  Her husband sent an email to tell me what happened.  I studied the words and sensed the sadness entwined in them.  An urgent desire to give him something to which he could cling for comfort overcame me.  I logged into my personal account and sent him a link to the homage which I had written to my mother-in-law upon her death.  A few days later, he sent his thanks; and after that, for the next year, he began to follow my current blog.

He often commented.  He sent short emails in which he mentioned a particular turn of phrase which appealed to him.  In reply to one shamefully self-pitying passage, he wrote a lengthy message of thanks for my kindness to him and his wife.  I began to look forward to his communiques.  He seemed to appreciate my writing, to see something behind my simple stories, to catch the obliquely phrased messages and the quietly embedded double entendres.

Two months ago, he stopped.  His silence felt ominous; and ultimately, I learned of his death.  Now I find myself again immersed in secondhand grief.  I have no right to this bereavement, and yet, it weighs upon me.  I don’t even know his grown children.  I have no one with whom to share my sense of a terrible rending in life’s fragile fabric.

This morning, I went outside with my small camera and tried to get pictures of the soft glint of the rising sun on the surface of the setting moon.  I did not expect much to come of my effort, but the sight of the orb high in the southern sky tantalized me:  The delicacy of its curve; the promise of its distant shimmer; the crisp white against the vivid blue of the summer sky.  I had to try.

Not until I came inside and loaded the few feeble photographs onto my laptop did I realize that a bird had flown through the frame.   With my focus on the faraway moon, the blurry image of the bird could almost be a speck of dust on my lens.  I stared at the picture for a long time.  I suddenly thought about Tom, husband of Fran.  I closed my eyes for just a moment, and recalled the last time I saw him, standing in my office with a mask covering the lower half of his face.  He had held my gaze with bright, glistening eyes as he thanked me for being kind to them.

I hope in death he did not suffer.  I hope he simply laid his head down and let his spirit soar towards the waiting form of his beloved.

It’s the twenty-first day of the one-hundred and first month of My Year Without Complaining.  Life continues. 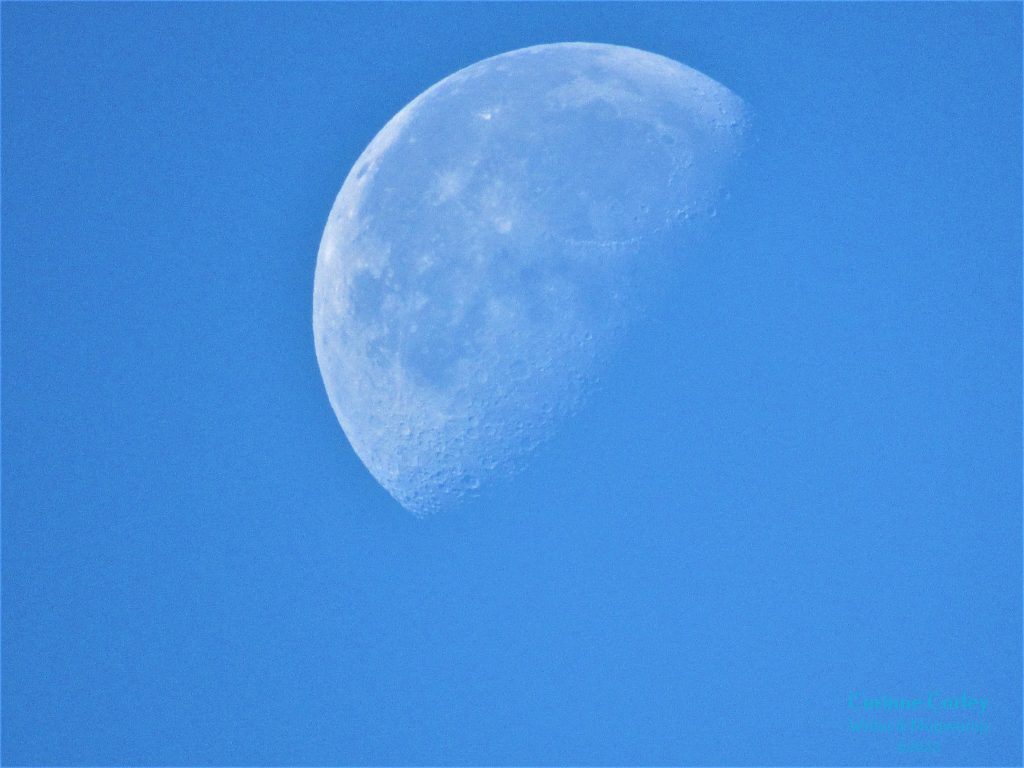 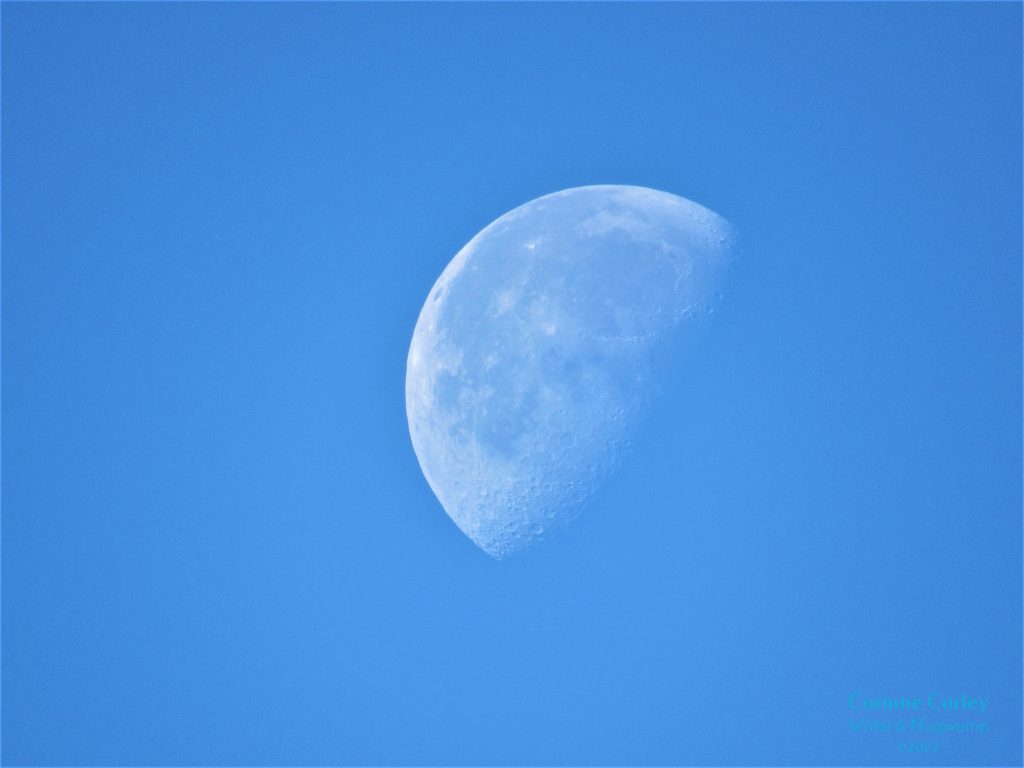 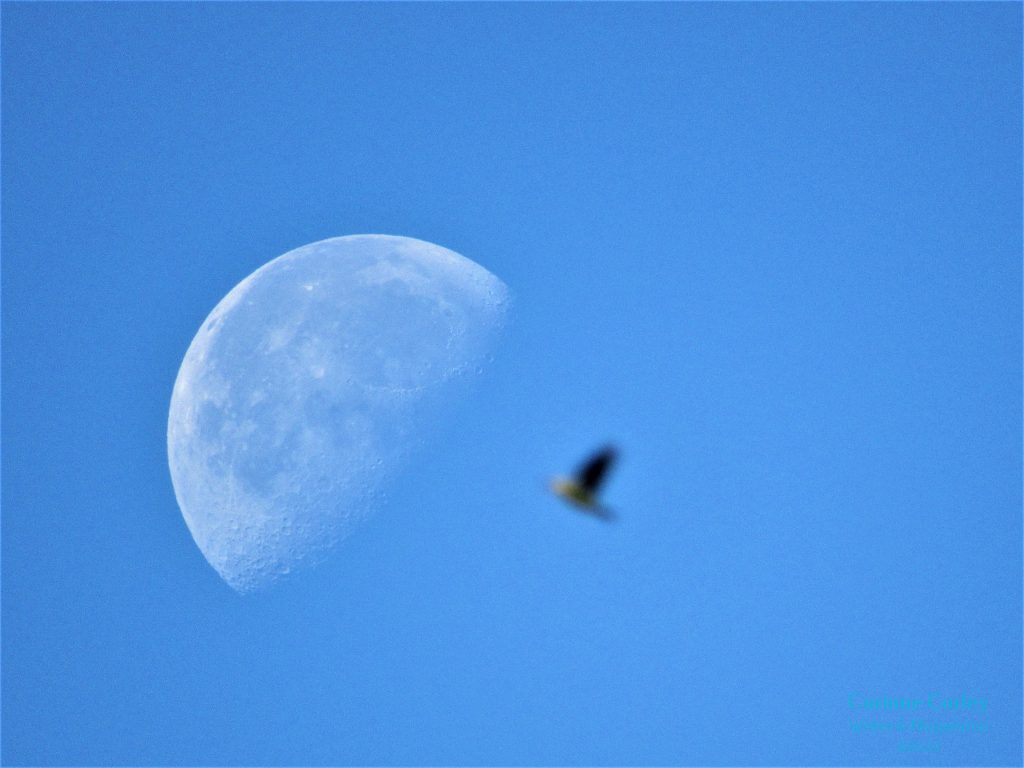