The concept of celestial beings watching over hapless humans appeals to me.  At several moments of extreme stress, I’ve seen such an entity.  When the car ploughed into me on 09 February 1982 and I flew more than three stories into the air, a genderless white  form gently guided my soul back into my body.  A soft voice cautioned that my time had not yet come.  Several years before that event, a similar form stood over my bed and urged me to consciousness.  Someone’s here, you must awaken, the voice pleaded.  When I stumbled to the kitchen,  I saw that the back door had been smashed and stood open to the cold of the building’s inner stairwell.

Skeptics sigh and blame my subconscious.  They might be correct.  I shrug and let them have the last word.  I know what I know.

So when I decided to sell my beloved Brookside bungalow and have a tiny house on wheels built, my dwelling’s name came easy to my tongue.  Angel’s Haven.  The only debate focused on the tense.  Singular possessive carried the day.

For the three years during which I’ve lived tiny, I have contemplated adding art to the exterior of the house.  A woman who briefly lived in my park adorned her adorable DIY build with a metal sculpture of vines and flowers.  I quite liked it.  But I wanted something so specific that such a rendering would surely cost thousands.  Instead I decided on a painting which would honor the lovely setting of the California Delta; the angels whom I believe protect me; and my little brother, Stephen Patrick Corley, who died by suicide in 1997.

Steve liked the Grateful Dead.  He felt a particular connection to the song Brokedown Palace.  In the lyrics of that song , I found imagery which helped to crystallize what I wanted in the painting for my house.  I decided to ask a neighbor, Alex Loesch, to do the mural.  I had seen some of his sketches.   His style had an essence which seemed right for the work which I wanted.  He had never done anything such as I proposed, but he eagerly embraced the project.

I gave Alex rudimentary guidance.  I told him that I wanted a work evocative of Maxfield Parrish which included an angel, a river, a sunset, and a willow tree.  He presented three prototypes created on his iPad from which I selected.  He started work seven weeks ago with the sanding of the cupboard doors on the back of my house.  He finished last Thursday with the application of the sealant.  Today he will remove the protective tape from the cupboard hardware.

Years ago, I wrote an essay called “Resurrecting Stephen” in which  I tried in vain to capture my little brother’s vibrant nature.  Events from my interaction with him marched across the typed pages.  But the piece fell flat.  I tucked the thing into a file folder, which went into a box, that now lives under my bed.   Besides the failed essay, the box bulges with the self-indulgent poetry that I wrote in college and half of a novel that I will never finish.

Alex’s painting does what I could not do.  Alex gave me a picture worth at least a thousand words.  Although he might not realize its perfection in this respect, the mural which Alex created both resurrects my little brother and lays him to rest.  Here, on the banks of a mythical rendition of the San Joaquin, a weary boy-child finds sanctuary.  With just four words for inspiration — angel, river, sunset, willow — Alex Loesch has depicted the eternal oasis that I craved for my little brother’s troubled soul.

It’s the eighteenth day of the eighty-eighth month of My Year Without Complaining.  Life continues. 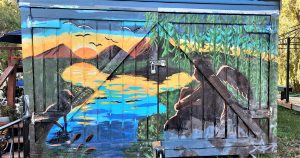