Yesterday I exchanged e-mails with a moderator from a website for survivors of clerical abuse.  I had submitted a piece which I wrote in response to the recent  summit in Rome about the abuse of children (and adults, including nuns) by Catholic priests. The moderator thanked me for my transmission and noted that my entry would be included on the list of stories of survival.  She said, among other things, “What you experienced was not your fault.”

That is a truth to which survivors cling.  It’s the one true thing which we carry with us, though we don’t always believe  it.  Integrating that certainty into my life has required me to turn the thought into a mantra.  The crazy reality for victims of pervasive and early abuse centers on our inability to distinguish illusion from reality. I don’t mean in the sense of common occurrences.  I’m talking about relying on our analysis and judgment.

Of course, the severity differs among us, depending on many factors including how much effort we put into healing. But at the baseline, often survivors can’t distinguish the trustworthy from the treacherous; the pothole from the level surface; the knowledgeable from the vain.  This results from neurobiological changes caused by trauma which cannot be reversed.  All we can do is modify our behavioral reaction.

Someone asked me what I thought about when I fell and couldn’t rise from my yard last weekend.  Her interest stemmed from horror, not voyeurism.  Oh my Gosh, she exclaimed. What went through your mind?

The question prompted reflection. In truth, whenever I fall, my brain immediately starts scheming ways to pull myself vertical.  But then a sort of stupor overwhelms me. A wave of rumination follows.The voices of my detractors rise from the depths to which I have shoved them.  I hear the gossipers, the naysayers, the sharp cackle of those who have castigated me for not being enough or the right stuff.

Then I hear the voice of Scott Lerner, the pulmonologist who gave me six months to live on Valentine’s Day in 1998. Sadly, Dr. Lerner himself died eighteen months later.  I had changed doctors to the great Joseph Brewer, who saved my life.

I ran into Dr. Lerner at a bagel place about a week before I read of his sudden death at 47 from a heart attack. I stopped at his table to greet him.  He gestured to two teenage boys. His sons, he said.  Then he admitted that he couldn’t recall my name.  When I gave it, a startled look crossed his face.  “But weren’t you— “, he started.  I smiled.  “No, evidently I actually wasn’t,” I replied.  I told his children that I was glad to have met them, and continued out of the store.

Eventually, last weekend, I pulled myself off the ground using the handle of my car door.  I brushed the dirt and leaves from my leggings.  Life has thrown a lot of curve balls in my direction.  I’ve suffered plenty of complaints about my deficiencies. I’ve learned a lot about the medical field that I would rather not know.  I’ve healed from broken bones; a broken heart; and the slashing of my pride, my innocence, and my ambition.  Ugly lies told about me  have tainted precious relationships.  Measuring sticks constructed from the standards of small minds have found me wanting.

Through it all, I’ve held onto my one true thing. That truth prompted me to start down my #journeytojoy, in aid of which I commenced this blog and the goal to learn to live without complaining.  I still fall.  And still, I rise.

It’s the twenty-sixth day of the sixty-second month of My Year Without Complaining. Life continues. 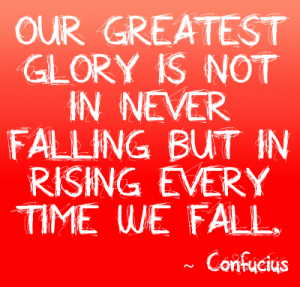