I’ve spend a lot of time on the computer today.  Some of my efforts have been for clients or GAL cases; others have been towards the end of organizing my life and reaching out to people with whom I need to be connected for one reason or another.  I’ve danced between the back bedroom and various parts of the house, with its echoes and its empty floors.  Series after series of electronic mail and phone calls kept me from really finishing anything.

Towards the end of the evening, I found myself reading Rupi Kaur, a poet whom I discovered fairly recently who expresses in poetry what I yearn to convey in my essays.  I think about my early days of straining to construct poems, of thinking that getting published in a vanity press meant something.   But bad poetry is bad poetry, even though the Eads Bridge did accept three of my poems and turn them into a rather decent triptych.

On smaller and smaller tables, I type, I eat, I shuffle papers.  I’m down to three lamps, a couch, four chairs, my secretary, and the china cabinet.  Upstairs a handful of portable furniture stands between me and being gone.  I walk among all of it, thinking about what has been given away, what remains, and what will soon drift out of here on the barest of breezes..

Unexpectedly, I shift past the triptych and remember the vanity poem.  It marches across my mind, jarring me, taunting me:

If I’m not real
behind this mask
which ties my mind
and sets my task,

then those who work
on my behalf
should give in with
a weary laugh.

But if I’m real
it’s also true
that loyal friends
have much to rue.

It’s terrible; I know — no illusions, no lingering belief in my potential.  I wrote it and submitted it to one of those come-ons in the back of a magazine in 1978.  Later, I realized what the good stuff did for me; its subtle, addictive allure; its rampant sensuality.   I luxuriated in Sara Teasdale.  I memorized Robert Frost and the World War I poets.  I cowed, humbled by their unabashed glory.

I abandoned all thought of writing verse.  In fact, I stifled the scantest possibility of writing.  I immersed myself in graduate school and alcohol; wild sex and a lost baby.    But I secretly scribbled, which produced three poems.  The powers-that-be at Eads Bridge snipped until they got them into a form which they considered good enough for its pages in early 1980:

RED*
Its rage is great
Its enthusiasm endless
Its beauty renowned

While GREEN is only
The cold voice
And the chilled way
That I use to send you home.

And what is blue
But all that I have in me?
The rain we felt in April
The wind; all the poems that you read me
Dresses that I wore to school
Mirrors from which my image shown
A butterfly, trapped briefly, then released
A child – once real – then gone.
More, much more
Too much to say
But there: and all in BLUE.

I’m not complaining about my lack of talent, nor about the detours which my life took.  These days I find myself ruminating more and more on what I have learned; less and less on what I have lost or that which I could never attain.  Growth; maybe.  A letting go.  A recognition that the detours took me through some rocky waters, but also brought me to palatial views, and  extraordinary lands populated with amazing people.

It’s the thirty-first day of the forty-sixth month of My Year Without Complaining.  Life continues. 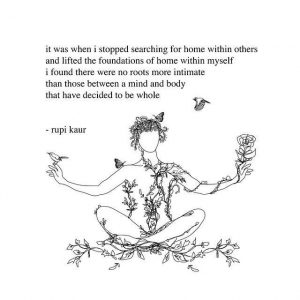 *Foregoing poems copyright C. Corley, 1977 and 1980, respectively.  I assume Rupi Kaur owns her copyright but reproduce the image here as I found it on the web.