When Carolyn Karr’s husband dropped me at the airport, I had not yet had a cup of coffee.

My flight to LAX arrived 45 minutes ahead of its own schedule.  A young woman with tart brown eyes and red finger nails wheeled me with extraordinary efficiency to Gate 17A, and tarried in pretend activity waiting for a tip.  Had she not done so — had she smiled and started just as efficiently away — I would have drawn the smallest bill from my bag and given it to her.  But I knew that bill would be a five-spot, and she seemed so demanding.  Instead I bestowed my winningest smile, watching her respond with all the surliness of a disappointed tiger in heat.

The SWA employee at the gate desk gestured to a kiosk beyond my sight in answer to my query about the nearest coffee.  Shoved into a tiny wheelchair, with my computer bag in my lap and my cane dragging the floor, I could never have made it.  I peered down the concourse.  When I looked back at him, he had turned to the pretty woman on his right and begun a conversation about the date he had the previous evening.

Inconsistent though it might have been, I snapped his photo and posted it on the SWA Facebook page with a note that he had declined to assist.  I knew my need might have exceeded his jurisdiction but so many people help others despite the inconvenience.  He seemed insensitive; perhaps that’s what compelled me.   I pictured someone like my son — maybe very much like my son — running a program much like the program which he runs.  I wondered what that invisible person would say, the one who manages their social media.

Victoria, she called herself.  She invited me to ask for coffee on board the flight, two hours hence.  I did not use any sour language, just noted that my layover encompassed a long stretch for one who had drunk only water since the prior evening.  Victoria did not respond.  Perhaps her jurisdiction, too, had been surpassed.

Then Holly came, the relief gate attendant, and a minute later she nipped down to the staff coffee pot and brought me a cup of the strongest stuff in seven states.  I drank it greedily and thought about the smile I had given her when I laughingly recounted the story of the Facebook post.  Then she started the announcements and I took her photo, too, and put it with the one of the guy who’d scored big, on a Sunday date with his wife.  She said, Did you take my photo?  I hope I looked good!  We had another chuckle just before she whisked me down to the plane.

An hour later, the airline with a heart safely delivered me to the city by the Bay, where I had left mine three months ago.  The woman who took control of me for the long ride to the car rental terminal weighed less than my suitcase.  I gave her the five.  She beamed.

I’ve never got the hang of unfamiliar blue tooth dashboards.  As I left the terminal, I struggled to figure out why the phone lady had lost her voice.  I’m sure I broke a dozen California statutes, holding my Google map in front of my eyes.  I strained to make sense of the route and then, just then, the highway dipped as highways do out here, and I saw her.

Now I’m sitting in the hostel kitchen.  I’ve brewed my own coffee, and I’ve made the bottom bunk which they reserved for me.  I’ve tossed my sweater on the rail and stood by the rope at the point itself, gazing at the sea, as the fog lifted just slightly, stirred by the afternoon sun.

Here, in the East Kitchen of the hostel at Point Montara, I raise my mug to the mother who gave us the babe who would, by virtue of adoption, become Edward Albee.  I don’t know why she did not raise the child herself, but because of what I like to think of as her sacrifice, he came to the home in which he received the specific nurturing needed to develop his voice.  And by way of that voice, I stumbled upon my mantra, the words which drive me to this place even when I have to come by way of Los Angeles.

“Sometimes it’s necessary to go a long distance out of the way in order to come back a short distance correctly.”  — Edward Albee, The Zoo Story.

It’s the twelfth day of the forty-fifth month of My Year Without Complaining.  Life continues. 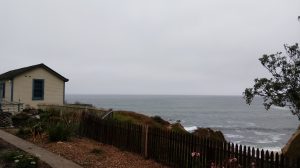 North by Northwest from the back walk at the hostel at Point Montara Lighthouse, Montara, California.

2 thoughts on “Here’s to the unknown mother”