I’m sitting in court, an hour early as I must be in order to get one of the six handicapped parking spots on the street in front of the courthouse.  As I dodged cars and slipped between people on the sidewalk, I strove to avoid the divots in the concrete.  Any slight indentation might fell me.  I’ve suffered so many broken bones and wrenched joints from the rocking of my spastic feet on uneven ground.

In an hour, I will ask a judge to take the next step towards normalization of my young client’s relationship with his father.  The man stands on probation for an injury which he claims resulted from an accident.  The evidence does not clearly establish whether the damage followed a regrettable mishap or an intentional ravagement.  Non-sexual in nature, the injury could well have been as the father describes.  The child, now six, could not be interviewed at the age of two when the event occurred.  We have no one’s word other than the man who did the deed.

Still, in the intervening four years, much as transpired.  For two of those, the child had no contact with his abuser, his father, the husband of his mother.  For the last six or so months, their interactions have been monitored by court personnel at my behest.  In that time, the man himself has been attending anger management classes as a condition of his probation.  Nothing has befallen his other child who still resides with him, the child of another woman with whom he has established a household while this case has been pending.

This is not the worst situation in which I have represented a child; far from it.  I’ve helped to terminate the parental rights of predators, drug addicts, and alcoholics whose actions resulted in profound and permanent damage to children who will spend their lives trying to reclaim their humanity.  I understand what those children suffer.  I have cowered beneath my own bed, listening to my mother’s sobs, waiting for the terrifying sounds and the brutal impact of relentless blows.  I know that anguish.

Even the single injury which the child in today’s case suffered outrages me.  I bring that indignation to every court setting.  But I let my lawyer’s instincts balance my survivor’s pain.  I know this boy wants a relationship with his father.  The father wants to make amends for what occurred.  This drama could have a happy ending.    It might even be that what happened was in fact an accident.  I will never know.

So we will take the story one more notch towards the outcome which we pray will occur.  We will loosen the restrictions.  We will wait.  We will watch.  We will pray.

Because of what happened to me as a child, I know that children who are hurt by their parents have a different view of life.   I’ve taken enough courses on the neuro-biology of trauma to understand why.  I also know first-hand how it governs our life.   We hesitate on the brink of every encounter.  We yearn for peace, for normalcy, for someone to slow  the crazy spinning of our world.  We long to surround ourselves with all the love we dare not feel.

Perhaps my client today has a chance for what all of us crave, whether what happened to him resulted from an accident or an isolated act of anger.  As I stand before the judge today and recommend that we move into the next phase, I hold that hope in my heart.  I remember, always, that HOPE FLOATS.  I will let it rise, and carry the fate of this child to the heavens.  But I will also stand watch.  I will be vigilant.  I will not fail him.  I will be his guardian until I know the need no longer persists.

It’s the twenty-ninth day of the forty-fourth month of My Year Without Complaining.  Life continues. 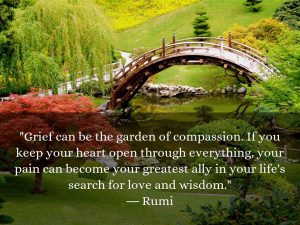