I spent most of my last marriage explaining myself to my husband.  Of all the truths about me which annoyed him, perhaps the irk which I found most confusing was his insistence that I drink tap water.

I understand the arguments in favor of tap water — it’s there, we already paid for it, it’s cheap, it doesn’t come in plastic bottles that last for an eternity and pollute the ocean.  But my then-husband did not employ any of those.  In fact, his Republican heart resisted even acknowledging the validity of what he considered liberal propaganda.  Instead, he thought I should drink tap water because it was better for me than other kinds of water.

But I won’t drink it, I countered.  I don’t like the way it tastes.  It isn’t at all good for me if I don’t consume it.  I continued drinking — and paying for — what I called “delivered water”.  I chose a brand which claimed to be spring water.  I didn’t really care where the water originated. I liked the way it tasted.  I drank it.  I stayed hydrated.

Perversely, when we traveled, he didn’t insist that I fill and carry a water bottle.  He would buy Fiji water for me, for reasons that I still do not understand.  But otherwise he would belligerently and often loudly insist that I should just drink tap water.  After a while, I did not argue.  I don’t care to endure loud voices, so I would just smile and walk into another room.  While there, I would fetch myself a glass of water from the dispenser and enjoy it out on the porch.

I recently discovered a brand of spring water called Icelandic.  The name caught my eye at the Sprouts in Lodi because I read a lot of crime fiction set in Iceland. I doubt that I will ever travel abroad but if I do, that’s one of the places which I long to visit.  I tried the brand based upon the allure of the country for which it is named. I found that I liked it better than any other type, which is saying something since I think I have tried most of them.

This water costs $2.49 for a 1000 ml bottle.  No one but Sprouts carries the brand in my area.  I drive into Lodi on Fridays to get groceries, sundries, and this bottled water.  Every once in a while, it goes on sale.  Since I drink a bottle of it every day, I value those sales.  Sprouts has other spring water, including a brand called Flow which is only $1.99 per bottle and tastes almost as good as Icelandic though not quite.  And yes, I know, I can turn on the tap and get water for much cheaper.  But I won’t, will I? so what difference does it make?

I chill my bottled water and make sure that I drink it from pretty vessels.  Sometimes I raise a glass of cold Icelandic to my ex-husband, for whom I hold no malice and even a fair amount of regard.  He’s right about one thing.  Drinking water is good for me.

It’s the twenty-second day of the ninetieth month of My Year Without Complaining.  Life continues.

Chapter 23, The Little Prince
written and illustrated by
Antoine de Saint Exupéry
translated from the French by Katherine Woods 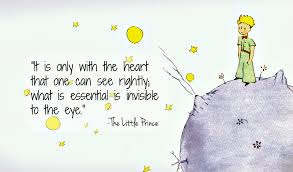 5 thoughts on “Of Essential Truths and Spring Water”