My little brother Frank stands on his sidewalk, arms folded, gazing out into the city night.  Beside him, I shift to find stable purchase on the uneven sidewalk.  I had miles to go the next morning and should have been sleeping.  But we rarely stopped so quietly, he and I together  We rarely shared anything of substance.  We almost never spoke of events more serious than politics or the happy successes of our children.  But for this one moment in time, his face takes on a somber air.  He reaches for words to describe his quest for a rich, full life despite the challenges of our difficult family.  Finally, he speaks, simply and quietly.

“Here’s how I see it,” he tells me.  “Our father was an asshole and our little brother killed himself.  Okay.  So what about the last twenty years?  What have I done?  What do I have?  A wife, a career, seven kids, my grandchildren.  These are what define me.”

My little brother Stephen Patrick Corley died by suicide twenty-three years ago.  No one knows the exact date.  I think he was found on June 14th and buried on the 21st.  Autopsy results put his death at seven to ten days before discovery.    Born on  a snowy Christmas in 1959; died on a warm June day in 1997.  In between, my brother lived, and loved, and laughed, and cried.  He suffered.  He visited pain upon others.  Those who rue his life and their connection with it have ample reason.  But those of us who cherished him — and trust me, the two groups coincide — still mourn the loss of him.

I drove home after shopping yesterday, thinking about my little brother.  In a box under my bed, I have a letter which he wrote to me from New Orleans.  He described his struggles and the way in which he chose to deal with them.  He spoke of the hope he felt.  He seemed determined to overcome his demons.  He signed that letter as he always did — Your friend and mine, Stephen Patrick Corley.

My father truly was an asshole, though perhaps because of the neuro-psychological damage inflicted on him by combat.  And my little brother did kill himself, letting go of his tenuous connection to the world one sweet summer day beneath a towering tree.  I did not understand either of them.  Of the two, I feel most the loss of my little brother.  His death did not surprise me though.   I do not know if he found peace on the other side of his terrible act.  For myself, I have struggled for two decades to find peace with his death.

As I traversed the levee road in the shimmering sun yesterday, I glanced to my right at the San Joaquin; to my left at the fields of Andrus Island.  I drew a breath.  I said a prayer.  I continued forward.

It’s the fourteenth day of the seventy-eighth month of My Year Without Complaining.  Life continues.

What Is So Rare As A Day In June

And what is so rare as a day in June?
Then, if ever, come perfect days;
Then Heaven tries earth if it be in tune,
And over it softly her warm ear lays;
Whether we look, or whether we listen,
We hear life murmur, or see it glisten;
Every clod feels a stir of might,
An instinct within it that reaches and towers,
And, groping blindly above it for light,
Climbs to a soul in grass and flowers;
The flush of life may well be seen
Thrilling back over hills and valleys;
The cowslip startles in meadows green,
The buttercup catches the sun in its chalice,
And there’s never a leaf nor a blade too mean
To be some happy creature’s palace;
The little bird sits at his door in the sun,
Atilt like a blossom among the leaves,
And lets his illumined being o’errun
With the deluge of summer it receives;
His mate feels the eggs beneath her wings,
And the heart in her dumb breast flutters and sings;
He sings to the wide world, and she to her nest,
In the nice ear of Nature which song is the best?

Now is the high-tide of the year,
And whatever of life hath ebbed away
Comes flooding back with a ripply cheer,
Into every bare inlet and creek and bay;
Now the heart is so full that a drop overfills it,
We are happy now because God wills it;
No matter how barren the past may have been,
‘Tis enough for us now that the leaves are green;
We sit in the warm shade and feel right well
How the sap creeps up and the blossoms swell;
We may shut our eyes but we cannot help knowing
That skies are clear and grass is growing;
The breeze comes whispering in our ear,
That dandelions are blossoming near,
That maize has sprouted, that streams are flowing,
That the river is bluer than the sky,
That the robin is plastering his house hard by;
And if the breeze kept the good news back,
For our couriers we should not lack;
We could guess it all by yon heifer’s lowing,
And hark! How clear bold chanticleer,
Warmed with the new wine of the year,
Tells all in his lusty crowing!

Joy comes, grief goes, we know not how;
Everything is happy now,
Everything is upward striving;
‘Tis as easy now for the heart to be true
As for grass to be green or skies to be blue,
‘Tis for the natural way of living:
Who knows whither the clouds have fled?
In the unscarred heaven they leave not wake,
And the eyes forget the tears they have shed,
The heart forgets its sorrow and ache;
The soul partakes the season’s youth,
And the sulphurous rifts of passion and woe
Lie deep ‘neath a silence pure and smooth,
Like burnt-out craters healed with snow. 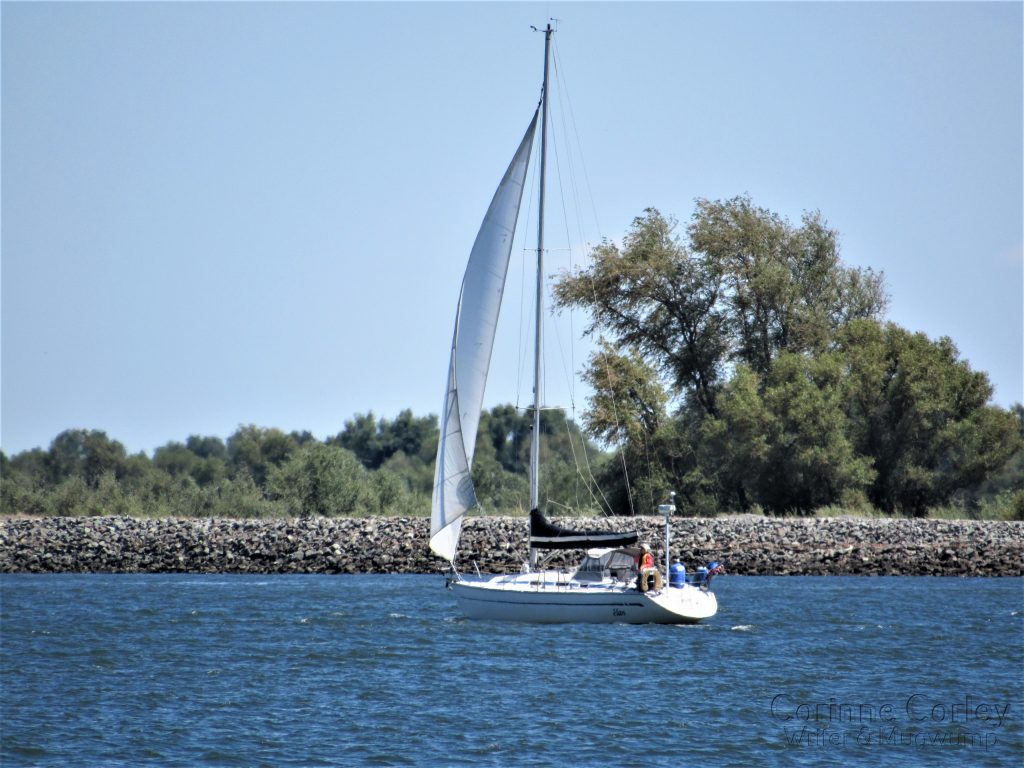 To the right: Sailboat on the San Joaquin. 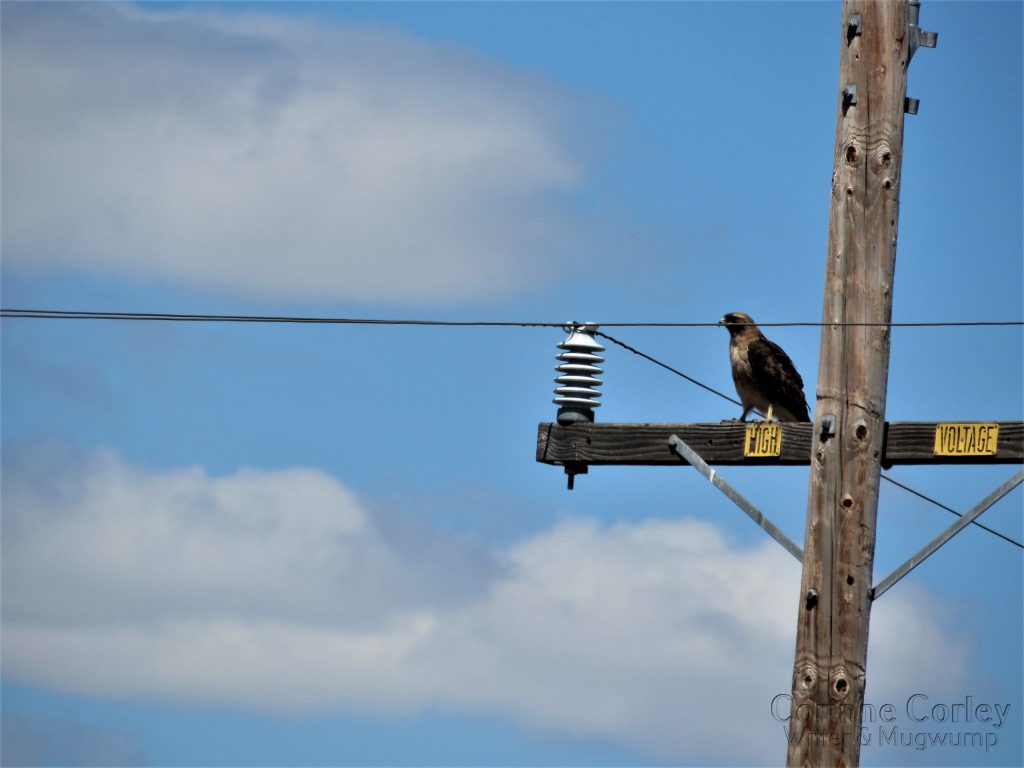 To the left: Hawk on a high voltage wire.

2 thoughts on “Nothing so rare as a day in June”