Here is the wreath which my sister Joyce made from the grapevines in Mother’s back yard, the year that Mom

succumbed to cancer.  Dad hacked down the plants as summer waned.  I wept, but Joyce charged outside and salvaged what she could.  I thought I had lost the wreath in the many moves; the mad house-cleaning before each marriage; the weary packing as love died; the wild dash to cram everything in boxes before the house sale.  The bow hangs a little crooked and I’ve had to replace the garland.  But it’s still in good shape.  Hard to believe, after 34 years.

can’t quite focus the camera.  I think Grandmother Corley had this ornament made for me.  My brother Frank has one, too; but none of the other kids.  We hung them last, right before the tinsel, because they were special.  We stood in the darkened living room watching the tree lights shimmer and waiting for signs of snow.  Mother always made sure we had plenty of presents, even in the years when we barely had food.  I remember once how she fell to the kitchen floor and wept in a puddle of milk and shards from the shattered bottle.  I don’t know how she did it.  She was my hero.

When I told my friends that I was going to have a child, they called me crazy.  Somebody — I won’t say who — said I should give him to a real family, with a father and a mother and a suburban house near a good school.  I turned away and hugged my growing belly.  I would love him all I could, as long as I could, with every ounce of faith that I could muster.  I look back on those early days and wonder what I was thinking.  How could I make such a monumental mistake as to think that I had something to offer a helpless infant?  But I did do one thing right.  I found a village, and I raised him there. A cluster of people who leaned into our little house when I couldn’t muster the energy to do what needed to be done.  And once more my sister Joyce came to the rescue, giving him dinosaur sheets, and Batman pajamas, and Baby’s First Everything.  I touch the little angel which hung from our first Christmas tree in that funny apartment in Fayetteville.  I knew nothing of child-rearing.   But I never looked back, I never regretted my decision.  With a heart full of unreasonable hope, I reached for his impossibly small hand and wished on the evening star that Santa would find him wherever he roamed.

I kept a small selection of ornaments from home when I moved.  I sent some to my son in Chicago.  I’m not sure if he 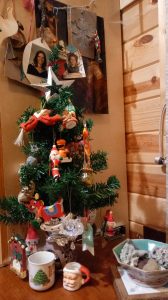 kept them.  Maybe he hasn’t unpacked any of the stuff which I foisted on him after I sold his childhood home and moved to California.  I ran not from him but from the mess I had made of my life.  The price he paid for my two decades of bumbling cannot be measured in gold.   Now I lift the baubles from their tissue and slip them onto the branches of the tiny tree which my son got for me.  He had it delivered to my tiny house just days after I arrived.  I drove to San Francisco to meet him at the airport.  He bugged the park office for any signs of packages.  When the tree finally arrived, we slid it from its box with eager hands.  It took just a few minutes to decorate, to dangle the smallest ornaments from the tree and hang others from the railing.  I had gotten a banjo for him.   I gave it to him that night, two days before Christmas.  He deserved it.  He’s tolerated so much.  He gave me his blessing when I told him what I planned.  The greatest gift.  He trusted me.  He let me leave, despite the fact that some would say that my time had passed.

There isn’t room on the miniature tree for the dove he made  in kindergarten, or the photos of Caitlin and Chris Taggart.  I tack a piece of jute on the wall.  A little heart plays Silent Night, tinny and tender.    I sit and gaze at the tree for a long time.  I close my eyes.  For just a moment, the kiss of winter air seems to touch my cheeks.  But then I realize that tears have begun to fall.

It’s the twelfth day of the seventy-second month of My Year Without Complaining.  Life continues.

by Sara Teasdale
My window-pane is starred with frost,
The world is bitter cold to-night,
The moon is cruel, and the wind
Is like a two-edged sword to smite.
God pity all the homeless ones,
The beggars pacing to and fro,
God pity all the poor to-night
Who walk the lamp-lit streets of snow.

My room is like a bit of June,
Warm and close-curtained fold on fold,
But somewhere, like a homeless child,
My heart is crying in the cold.

2 thoughts on “A box filled with memories”