I have acquired an enemy.

I don’t intend to out the person.  I will strive to avoid gender, circumstance, and character.  I don’t want to complain, kvetch, gripe, grumble, or grouse about this individual’s apparently unrelenting campaign to discredit me.

I just want to talk about one perfect oyster shell.

I got the shell at lunch on Saturday.  My friends Jim and Nancy ordered oysters to start their meal.  We sat at the last inside table at Sam’s Chowder House on a length of Cabrillo Highway which could be Montara or Half Moon Bay; I’m not quite sure.  The infinite blue sea stretched beneath the cool creamy azure of a California sky.  A table of adorable people on the deck beyond our window delighted us:  Mother, father, son, daughter, all in little fisher-people hats to shield their delicate skin from the sun’s zealous affection.

Sam’s is one of three places at which I break my vegetarian diet to eat seafood.  Jim and Nancy’s kitchen is another, along with that restaurant in Jenner at the mouth of the Russian River which serves overnight tomatoes and freshly-made lemonade beside fish caught in the harbor and all along the coast.  At Sam’s, I had perfect fried cod and coleslaw, with a Chardonnay and gluten-free apple-crisp for dessert.

Nancy wiped the debris from their oyster shells and offered one to me.  I wrapped it in a napkin and buried it under my wallet in the bottom of my handbag.  I promptly forgot about it.

Last night, I saw a trail of my enemy’s bombardment in a virtual realm.  One of the other hostel guests sat adjacent to me at the table with its sign suggesting that we talk with each other.  I’ve got an an enemy, I told the lady, with whom I had been exchanging increasingly less superficial conversation for an hour or two.  I shared a little bit of what I knew about the rising anger of my attacker.  We talked about the sadness which must drive the person to spend so much time castigating me.  She told me the story of someone whom she had found to be equally adverse, and how she handled the controversy.  I liked her ideas.

I drove home by way of San Ramon today because I had an hour or two in which it didn’t matter whether I got anywhere or not.  For that matter, I could probably wander, lost, for a couple of decades.  My son might text. My sister Joyce would certainly call.  But most everybody has become accustomed to my strange behavior and besides, they have their own lives.  Eventually, alarms would sound but I reckon it would take at least a few weeks.

As I drove, I gazed over the rolling hills and towering trees of Contra Costa County.  Mount Diablo sat on my right.  I remembered the day that I foolishly decided to climb its southern face in my Toyota, and the trepidation, if not hysteria, which coursed through my body.  I felt again the tenseness of my hands as I clutched the steering wheel and the fervor with which I begged whatever angels had not abandoned me to stay by my side until the end, bitter, sweet, or boring.  Again I reminded myself that I had to keep living.  I have a lot for which to be thankful, but even more for which to make amends.

When I got home today, my neighbor Barb greeted me with the news that power had gone out.  She didn’t know if it was local or island-wide.  Jackie, who knows most and sees more, answered my texted query with updated information and an estimated time of restoration. I talked a little with Josh, who lives in the converted school bus and plays exquisite music on a soundbox with stretched wire, as he has been known to describe his guitar.

Then I carried some of my things inside and opened the curtains.  On a whim, I rummaged in my handbag and unearthed the wad of paper.  I slowly pulled its edges back, and studied the oyster shell.  After a few minutes, I nestled it among the rocks in my mother’s old bowl.  I stood and beheld the pale blue of the Delta sky and the rising limbs of the tree above my neighbor’s house.

I suddenly recalled a telephone call in which my son and I participated after Marshall Rosenberg died, a peace call, I think the Center for Nonviolent Communication called it.

Dr. Rosenberg divided communication into giraffe language and jackal speech.  I’ve still not perfected the former, but I recognize and strive to eschew the latter.  All jackal speech arises as a tragic expression of an unmet need, Dr. Rosenberg taught us.  My enemy apparently spends a fair amount of time hating me; and so much energy expressing that hatred in oblique, sad ways in obscure venues.  I wonder what unmet need drives the fury.  I closed my eyes and let myself feel the venom.  I tried to manifest the force of wrath and allow it to flow through me, with the hope that I might perceive the unmet need.  When I opened my eyes, my gaze fell on the delicate contours of the oyster shell which my friend Nancy gave me, on a joyful afternoon, two hours west of here, on the coast of my Pacific.

It’s the third day of the seventy-first month of My Year Without Complaining.  Life continues. 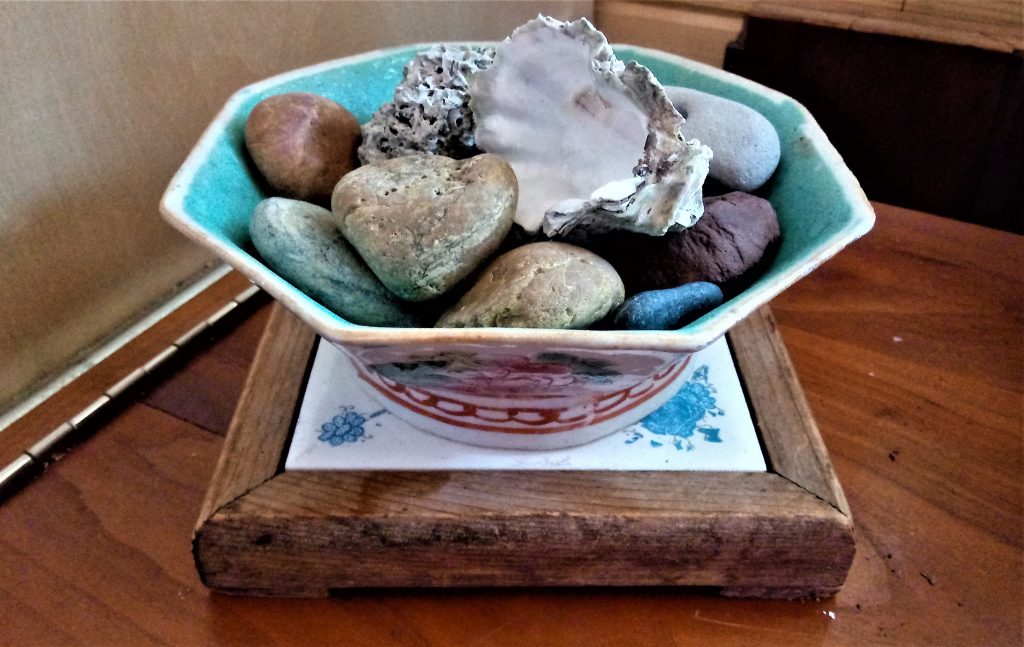 “All violence is the result of people tricking themselves into believing that their pain derives from other people and that consequently those people deserve to be punished.”