I do not believe this story has ever been told.  Trigger warning:  This piece contains an account of suicidal ideation.

November 2014.  My life had shattered ten months earlier, and then the shards had slowly disintegrated.  My husband had left me.  My favorite curmudgeon had just died after an agonizing five months of lung cancer.  I could see everything to which I had clung vanishing into an abyss from which I knew I could never retrieve the remnants of a life that I never believed I deserved.

My days became a desperate regimen.  A handful of hours spent at work before surrendering to grief.  A trip to some coffee shop, where I would cry into my mug and the servers would pretend not to see me.  Sometimes they brought over refills or broken cookies from the counter display, which they would gently set next to my laptop.  A few would pat my shoulder before fleeing back to their stations.  Often, I would go to the public library and scrounge for books that I had not yet read into which I could escape during sleepless nights of anguish.

On one such evening, I decided that life held too much pain for me to continue living.  This marked my lowest hour.  As the survivor of a brother’s suicide, I had once vowed that I would never put my son or my remaining sibligns through the agony of regret that inevitably follows the irreversible act.  But on this night, with cold rain falling on my mother-in-law’s Prius which my husband had given me after his father’s death, I surrendered to my  despair.

Here’s the thing:  Whether you believe in God, divine intervention, or the irony of the Universe’s control over you, sometimes you have to admit that life takes hold of your best and your worst intentions and shakes them like a rag doll.  Perhaps my favorite curmudgeon’s spirit still lingered on this earth.  But what happened next set a chain of events in motion that indisputably resulted in my continued existence.

I wept.  I sobbed.  And in a moment of rage, I pounded on the steering wheel.  I’m not certain, but I think my slammed fist pressed the button which connected the car’s computer to my cell phone.  The device redialed the last number, which happened to be Paula Kenyon-Vogt.  Unknowing, I cried into the emptiness, giving voice to my decision to drive that Prius into a bridge and put myself out of the misery which gripped me.

A few minutes later, knuckles wrapped on the glass of the driver’s window.  I froze.  I slowly turned, then lowered the glass.  Sheldon Vogt, Paula’s husband, stood in the darkness, sleet, and wind.  We stared at each other.  He spoke:  Paula says you can’t kill yourself and I should take you to dinner.

It seems that In my frenzy, I had lamented the irony of sitting in front of the public library trying to figure out a way to commit suicide.  Called by my phone without my realization, Paula heard my plans.  She had disconnected the call and summoned Sheldon to find me.  My guardian angel apparently needed assistance from one in human form.

Eight years have passed since Sheldon and I sat over a salad that I barely touched and did not taste.  He listened to my wretched lament, interjected a few calm reflections, and stayed with me until he made certain that I had abandoned my intentions.  Then he followed me to my house, got me inside, and gave me a hug from himself and Paula, who was on duty at her job but had been the sure instrument of my immediate salvation.

Two days ago, Paula and Sheldon drove from San Francisco to the California Delta to have dinner with me.  I had seen them earlier this year at my book release, but the knowledge that they took one evening of their five-day California vacation to see me speaks both to their virtue and the strength of our friendship.  Over dinner in Isleton, we brought each other current on our lives and those of our children and, in their case, the grandson who has always lived with them whose birth I well remember and whose smile shines from his grandparents’ faces.  A few hours later, they headed back to their hotel on the Bay.   I went home to my tiny house, the table of which Sheldon built and the stairs of which he designed.

Their presence lingers here and will sustain me for a long time.  I know a lot of good people in the state to which I have moved.  But nothing says “home” quite like three friends who have been through thick-and-thin. sharing dinner and laughter on a November evening in the calm of their middle age.

It’s the nineteenth day of the one-hundred and seventh month of My Year Without Complaining.  Life continues. 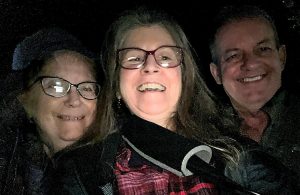 Me, Paula, and Sheldon, outside of Manny’s Barzzeria in Isleton, California.

To see a new video of #MyTinyHouse and see the table that Sheldon made and the stairs which he designed, click HERE.