One might think that a thrice-divorced woman on the sad side of sixty living alone in a tiny house, employed well past retirement with no end in sight, might eschew unfortunate Tennessee Williams references.  While it is certainly true that certain aspects of my life bear too much resemblance to Miss Blanche DuBois, I don’t mind.  For one thing, I’m from St. Louis, and family legend held that my father once stayed down the street from the apartment building where the playwright supposedly lived as a teenager.  Moreover, I made my one and only directorial debut staging The Glass Menagerie as a one-act play.  But here’s the real thing:  I don’t mind accepting kindness now and then, despite my fragile ego, my stubborn nature, and my historical resistance to the well-intentioned offering of gentlemanly arms.

In 1973, I sustained a severely dislocated hip when an Oldsmobile Delta 88 slammed into the orange 1967 Gremlin in which I rode.  As with most of my car accidents, my guardian angel kicked into high gear in the seconds before, during, and just after the terrifying accident.

Seatbelts had not become an immutable way of life fifty years ago.  Accordingly, I had not yet deployed mine.  As a consequence, when the Olds ploughed through my door, I lurched to the left and fell onto the seat.  The move saved my life, but the car door and the front tire of the Olds pinned me to the cushion.   I writhed beneath the weight of metal while my date struggled to maintain some semblance of control.  We slid sideways and crunched against the far curb.

Silence descended.  Then a rush of noise:  Are you alive?  Does it hurt?  my boyfriend screamed.  The driver of the other car staggered in circles outside, moaning, mumbling.  A siren wailed.  I lay as still as I could.  I closed my eyes.  After an eternity, I felt a cool hand on my forehead.  I heard a deep voice assuring me that he would not leave until I had been extricated.  I think it was a firefighter; but it might have been an angel.

Weeks later, my hip forced back into place and the swelling minimized by drugs, I got to  leave the hospital for my dorm room.  One night, I came back from the library to an empty floor.  I walked towards my room at the end of the hall.  Halfway there, my hip popped out of the socket and I collapsed to the carpet.

An hour passed before the other girls started to drift home.  By then I had managed to crawl a few feet.  Tears streamed down my face.  I reached my arm towards the first returning students and begged for help.  They skirted around me, casting looks which told me that they assumed I had been drinking.  An hour and four or five such encounters later, the R.A. arrived and sprang into action.  She gently lifted me into her arms, carried me to my room, and laid me on my bed.  She brought hot tea and a cool cloth.  She sat beside me until I fell asleep.  The next day, she drove me to the emergency room, where more drugs and a cane boosted my potential for recovery.

In the intervening years, I have had various opportunities to re-test the kindness of strangers.  I’ve gotten lost in strange cities.  I’ve broken bones at state fairs.  When my son was eighteen months old, his hand slipped from mine at Midway Airport and I had to leave our belongings in a heap, drop to my  hands and knees, and crawl through the crowd to find him.  On my return, a man clad in a London Fog stood guard over my bags.

I could continue.  I could tell stories for hours of knights and ladies in metaphorical shining armor, who stepped into frays, and gaps, and breaches to save my sorry butt time and time again.  But not today.  Today I  just want to tell one more story, of one stranger, in Rio Vista, California, on this chilly March day in the first year following the year of years in which we all learned what it is like to be so very alone.

Readers might not be aware of my precise disability and the nuances of its manifestation.  A brief explanation, then.  I have a neuro-transmission disorder which causes numerous broad deficits, chiefly profound spasticity in my legs but also damages to my proprioceptor systems.   “Proprioception is the process by which the body can vary muscle contraction in immediate response to incoming information regarding external forces, by utilizing stretch receptors in the muscles to keep track of the joint position in the body. “  The main components of effective proprioception are your eyes, your ears, your legs, and your brain.  For various reasons, none of those properly work for me, so proprioception falters and often fails.  In a nutshell, I can’t walk and chew gum at the same time (if I were so inclined, which I’m not) and my legs shudder under challenge.

This morning I sashayed out of my car in front of the building in Rio Vista at which I work.  I don’t use a walking stick because they just get tangled in my two other nonfunctional appendages.  But from time to time, they might come in handy to give me a bit of balance, and the sloped driveway over which I must traverse to get to the sidewalk in front of our office poses one such point.  Usually, I manage the route with only a minimum of difficulty.  Today, I got stuck.  Quite literally, I took one step off the street and could not continue.  I could not lift either leg.

My body trembled.  I raised my eyes to measure the distance to the door, just as the morning sun cleared the buildings across the street and blinded me.  Helpless, I stiffened my body to hold myself steady, and willed myself not to cry.  I know what happens when emotion takes over at such times.

I slid the phone out of my bag and tried calling the woman for whom I work.  No answer.  I tried again; same result.  I strained to remember what would happen if I called 9-1-1 from the city center, in which I do not live and with the services of which I am not familiar.

Just then, a truck came through the intersection. I frantically waved and the vehicle slowed.  A window came down and a large dog stuck its head into the morning air.  I need help!  I cried.  Then I told my customary lie:  My artificial knee locked, I just need help over the curb!  I do have an artificial knee.  It does lock, being broken.  That excuse for my predicament sounds much better than the truth, and it’s easier to say.

The driver opened his door.  When he came toward me, I saw that he was a man some years my senior, moving slowly, wearing the yellow slicker of a worker.  He held out one hand, a hand misshapen by injury or accident of birth.  But he placed that hand under my elbow and guided me towards the doorway, asking gentle questions, telling me about his own artificial joints, slowly getting me to safety.  Out of the corner of my eye, I saw the intent gaze of his companion following our progress as we moved away from him.

I thanked the man over and over.  I asked his name.  I assured him that I was fine.  I leaned against the wall of the building and smiled as he  got into his vehicle.   Then I made my shaky way into our offices and to the break room, where I could make a cup of coffee before falling into my chair.  With hands wrapped around my mug, I whispered a prayer to my weary guardian angel, for sending back-up.

I don’t know who this man was.  I only know that he came along at the precise moment when I had great need of him.  But I’m sending this blog entry into the world, in case someone else knows Dave, who might or might not live in Rio Vista, California; who has a white truck (which could be a Ford) and an eager, friendly black dog (which could be a Lab), two artificial knees, and a heart as big as the entire state of California.  If you know this kind person, please, I beg you:  Tell him that Corinne Corley thanks him from the bottom of her lily white spastic legs to the top of her frizzy, lopsided Lebanese head.

It’s the sixteenth day of the eighty-seventh month of My Year Without Complaining.  Life continues. 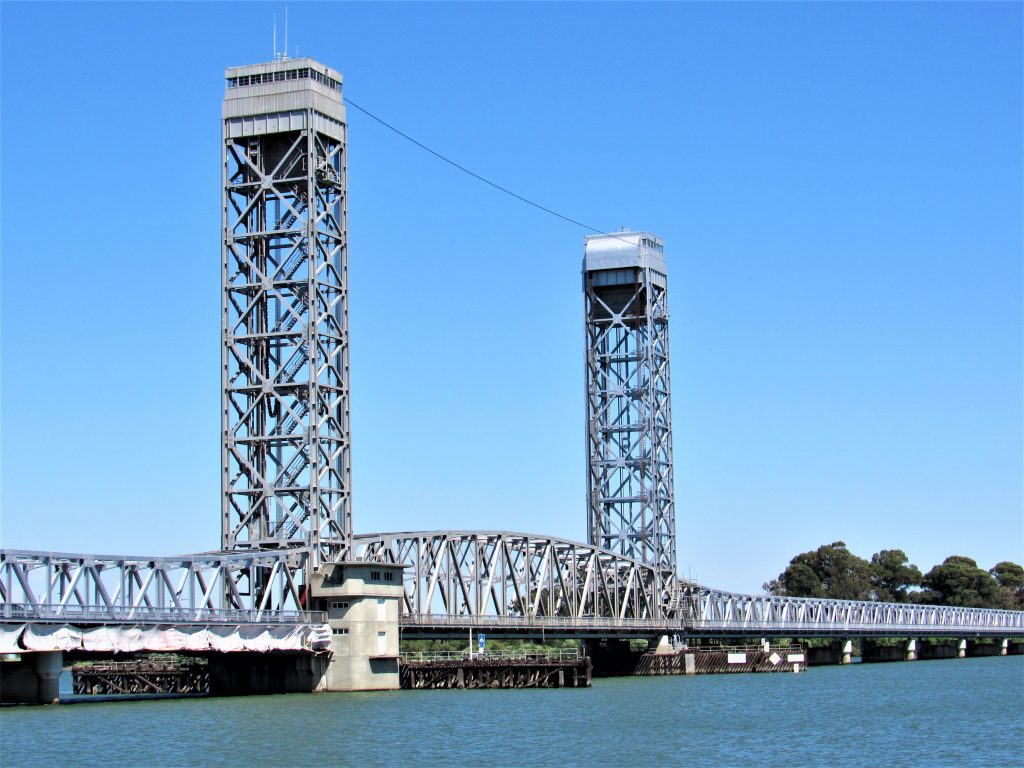 For no particular reason, here’s a picture of the Rio Vista bridge which I am fortunate enough to have captured one day after work. Please enjoy.