I came upstairs to dress and prepare for an arduous day.  But the computer drew my attention.  I’ve been scrolling through pictures of last evening’s fundraiser for SAFEHOME and Rose Brooks Center instead of dressing, making the bed, and generally behaving in mundane but necessarily responsible ways.

I had a running argument with someone about the distinction — if any there be — between saying “I appreciate you” and saying “Thank you”.  I contended that the former conveyed an affirmative act of engaging in gratitude.  I believed it to be the more powerful and evocative articulation.  He disagreed, initially without being able to formulate the basis of his dispute with me.  Over time, the argument became both entrenched and symbolic, as such controversies will do.

Eventually, he came to me with this sentiment:  I prefer to hear “Thank you” because it places the emphasis on ‘me’ , rather than on ‘you’.

He made a certain amount of sense.

I think of human interaction as a continuum but not a linear one.  I see few experiences as linear.  Though I appreciate Miranda Erichsen’s “you live, you die”, as a justification for choosing action over inaction, I don’t truly believe that life can be so neatly summarized.  You live. . . you act in ways which ripple through the universe to cause unforeseen effects. . .your persona changes because of the ripples flowing in your direction. . . then you. . .die? Rejoin the collective conscious and act in another plane, causing rippling there and who-knows-where-else?

I once heard that the Japanese have multiple words for “gratitude” and they all translate to resentment.  I’ve since researched and determined that to be a myth.  But in languages which use characters rather than the letters of Germanic languages such as English, varied expressions of thanks do exist.  I found this one in Arabic:  شكر.  Its translation seems to be “thanks, gratitude, thanksgiving, thankfulness, acknowledgement”.  Acknowledgment comes the closest to what I strive to convey when I say, “I appreciate you”.

I dwell in a state and process of appreciation.

Thank you.  To all of those who attended last night’s fundraiser for SAFEHOME and Rose Brooks Center.  Thank you to Miranda Erichsen, for her tireless and unfailingly graceful work and support of the event and of me.  Thank you to Jilli Nel for EmCeeing, auctioneering, and inspiring.  Thank you to Karla Hull for garnering donations, food, and raffle ticket sales (!!!).  Thank you to Lori Hooten mostly for being herself, but also for working on the committee, sharing her art and words, and bringing her fabulous daughter Kristan Roller to be our warrior princess.  Thank you to the participating artists, Jill Huxtable, Ruthie Becker, Amy Fisher, and Lori Hooten, for manifesting survival in visual art and the written word. Thank you to Flowerama for the beautiful floral arrangements and the corsages, especially mine.  Thank you to Family Court Commissioner Martina Peterson, for her courageous support of recovering addicts in Family Court as well as for last night’s moving, powerful speech. Thank you to Sidepockets for the food, and to the lavender-icing-cupcake lady whose name I do not know.  Thank you to all the sponsors, including and perhaps especially Russell Criswell of Vulcan’s Forge and Jan Buerge of World’s Window.   Thank you to my always-cousin-in-law Tom Platt, for showing up, staying, and for winning a bidding war over a Vulcan’s Forge original piece and then presenting it to me for a birthday gift.  Thank you to my business partner, ex-husband, and suite-mate Jim MacLaughlin for his contributions to the benefit, his sponsorship, and for supporting this cause.  Thank you to suite-mate Ted Hughes of The Hughes Law Firm for showing up, getting auction donations, and bidding.  Thank you to all who attended, bid, bought raffle tickets, and put money in the tip jars.

We raised around $4,000.00, more than last year.  I am humbled and honored to have been a part of this.  Work such as this both invigorates and completes my spirit.

Most of all:  Thank you to SAFEHOME and Rose Brooks Center, and all the agencies that work with those who survive and thrive after experiencing family violence.  Their dedication gives thousands of women and children — and, yes, men — a chance to find security and safety on the path away from victimhood and towards peace and survival.

It’s the twenty-fourth day of the forty-fifth month of My Year Without Complaining.  Life continues. 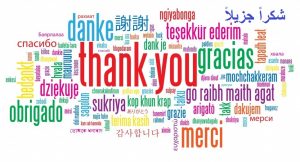 My Favorite Version of Livingston Taylor’s Thank You Song

One thought on “Thank you”