For the last couple of years, I’ve seen midnight alone.

In 2014, my friend Ellen invited me to go to the NYE bash at Knucklehead’s with her and Jerry Stewart, her “gentleman caller”.  I considered it — I truly did, Ellen.  I got online and saw the $100.00 pricetag and swallowed.  I got out my debit card and looked at the balance online. I considered my budget.  I had spent the entire year mourning my failed marriage and clinging to my father-in-law.  I devoted six months to visiting Jay, going out to dinner with him, listening to him; and then, sitting for one last time by his son at the cemetery to say goodbye.  For the six weeks after Jay’s death, I slogged my way through Thanksgiving and, with the support of friends, my sisters, and my son, survived Christmas and a brief, crazy contemplation of suicide.  Which is to say:  I had not earned a lot in 2014.  I had other distractions.

I sat in front of the monitor on the afternoon of 31 December 2014,  thinking about the drunken catcalls, gropes, and intense stares in bathroom mirrors that go along with a New Year’s bash in any bar.  I couldn’t face that as a single person.  Good grief — I couldn’t face it with the most gorgeous man alive strutting through the place on my arm.  I hadn’t the heart.  Instead, I  made a donation to my mother-in-law’s favorite charity, Camps for Kids.  I made another to the American Cancer Society in honor of both my favorite curmudgeon and my mother, each of whom succumbed to cancer.  I split the C-Note between the two, and that took care of the price of a Knucklehead’s ticket. I stayed home and went to bed at ten.

I wish I could say that I recall what I did on New Year’s Eve in 2015 and 2016.  I suppose I spent them in solitary contemplation, or cleaning house, or writing blog entries.  I know that my son called me at midnight some of those years; my sister left voice mail on others.  I made scoffing reference in idle conversation to Bogie’s term:  “Amateur Hour”.  I barely drink alcohol anymore, and I never drink alone.  I’m sure the most I did was raise a cup of Earl Grey to the memory of the dying year, and to hopes for the dawning one.

When I decided to move to California, I gave some thought to timing the voyage so that I’d land here on December 31st.  But other considerations superseded my thirst for symbolism.  The real estate market; a lull in my trial schedule; my son’s waning personal time off from his job; our dog’s health; my traveling companion’s availability; all contributed to the exact timing of my launch.  But I’m here — at Park Delta Bay, a quirky RV park striving to attract tiny homes.  I joined six or seven others already squatting among the trailers, campers, and RVs whose owners chose this way of life for one reason or another.  When I awoke this morning, frost dappled the tender grass and the amber leaves of the old weeping willow behind me.  Fog clung to the dips and dimples in the wide expanse of valley.  I can’t see the river but it winds by a few hundred feet to the south of me.  Seventy-seven miles to the west, the mother sea waits for any day when I feel drawn to sit at her feet and share my troubles.

I hear stirring outside my house.  Joe the handyman might have started his workday.  He’s building a little 4 x 10 porch for me.  All I need is enough space for an oak rocker and a couple of plants.  It will stand free of my tiny house so that it can be thrown in the back of whatever one-ton pick-up moves this place.  I’m here for now, making my home in the California Delta.  I’ll winter here, at least.  Perhaps I’ll spend a year or maybe two.  Eventually, I will make my way to the coast, to live out my days with the voice of the sea to soothe me.   Til then, I have to find a job; and get my little washer-dryer combo unit repaired; and unpack the last box.

When I started this blog in December of 2013, I did not envision that I would be writing it four years later.  I thought of it as the grand launch of my new self.  That self would be the wife my then-husband wanted:  Calm and sweet; accepting; staid.  She would continue to be the sassy mother to her only son; the enduring Ruth to her last surviving parent-in-law;  She would no longer forget important steps in her client’s’ cases and have to madly dash around the office lamenting her disorganization.  She would not cry when her legs ached or her heart broke.  She would easily make the 365-day mark without uttering a word of complaint.

As we know, the best laid plans of mice and men have often gone astray.  So too the plans of womankind, and of myself, a mere human trying to swim in a sea of debris not always cast into these dark waters by my own hands.  I swim clumsily, with crippled legs.  My voice rises in a thin whine from the darkness.  I flail with spastic hands, no longer lily white but mottled, bruised, and bleeding.

Still I paddle on, gamely, even eagerly.  Once in a while, I rest on a floating piece of hundred-year-old lumber.  I fall into the arms of angels leaning out from old oak piers.  I draw deep cleansing breaths; then forge ahead, towards the horizon, looking for safe harbor where I can rest for eternity.  Once in a while I cradle another so that they, too, might briefly pause.  I let them lean on me, keeping both our heads above water.  I can do no more; but that, at least, I can do.

I never got to the version of myself which I envisioned four years ago.  The likes of me could never be silent, or simple, or serene.  With my wild gypsy hair and my dark Mediterranean spirit, I am the wrong sort of woman to stand beside anyone wanting to pass their days in quiet disengagement.  I’m not that woman. I don’t begrudge anyone who is, nor wish anything but good to anyone who deems me to be the wrong sort of friend or partner.  I read an interview with Melissa McCarthy in which she said, boldly, “If you want somebody different, pick someone else.”  I like that concept.  I aspire to flash that particular dictate in the direction of anyone who studies me and finds me wanting.

At the same time, I harbor no ill to anyone who turns their heels on  me. I don’t hate my former husband — either of the two who left me for other women, to be honest.  How could I hate someone whom I loved? Whom I love?  I don’t turn love off and on like the faucet in my forty-square-foot kitchen area.  I recognize that hate would, in some ways, be easier.  But I do not seem to have that capacity.  I have enormous ability to love, and very little talent or taste for hate.

Yesterday, Joe Matej (the park handyman) and I mopped water from the floor of my tiny house for the third or fourth time.  I thought with no small measure of irony that if the washer-dryer combo had failed thirty days ago, it would have been covered by my AB May home maintenance agreement, for which I paid $48/month at the suggestion of a realtor whom I did not use.  He seemed to think that agreement could be useful in the sale of my house, but it turned out not to be transferable.  I did get a 15% discount on a new hot water heater because of it, but in the final analysis, like most purchases made because of the wild-eyed recommendation of a born salesman, that too just cost me money.

But I’m not complaining.  This year draws to a quiet close and I have no urge for lament, or regret, or chagrin.  Instead I let the faces of those whom I cherish drift in front of me, one after the other.  If I tried to name them, I would have to add a hundred footnotes to this entry explaining the beauty of each soul.  Instead, I will tell you this:  I am a fortunate woman.  People have stood by me through terrible times; through terrific times; through times when I betrayed their faith in me.  I did the same for them with as much determination as I could muster.  What else could we do, any of us?  Why else walk this earth, except to hold out your hand and bring others along with you, as you make your way towards whatever end the universe has in store for us?

Happy Newest Year, to my family, friends, and fans.  Ring in 2018 with glorious abandon.  But be safe.  Be joyous.  Be delighted.  Be happy.

It’s nearly nine in the morning, Pacific Standard Time, on the thirty-first day of the forty-eighth month of My Year Without Complaining. Life continues. 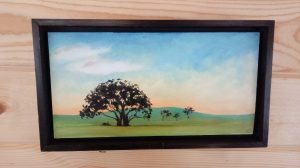 Of all the marvelous art which I’ve acquired in the eight years of Art @ Suite 100, I chose “Cupcake” by Nicole Thibodeau for the piece which I see as I write. I aspire to this level of serenity.

4 thoughts on “Ringing In The Newest Year”