I spent most of today lingering in the narrow strip of gloomy grey between self-pity and despair.  The normal vagaries of daily existence overwhelmed me, as I clutched my back and doubled over on the short walk from house to car.  A half-hour wasted online struggling to convince the Instacart ordering system that I don’t live in Arizona sapped what little strength I had managed to reclaim with constant ingestion of Naprosyn.

I made the drive to Lodi on the liquid courage of the Starbucks drive-thru at Flag City, augmented with one of their over-priced Impossible® breakfast sandwiches.  The in-store shopper at Sprouts approached my vehicle within five minutes, calling my name in a cheerful voice.  I saw the spider-webs painted on her eyelids and complimented both her spirit and her make-up.  Later, i regretted not asking to photograph the artwork.  I did not regret the tip that I insisted she take.  “Buy yourself a cup of coffee,” I told her.  “My son would never forgive me if I didn’t tip good service.”  Her reticence seemed genuine.  The invocation of my offspring convinced her.  I drove away happier for the encounter.

But I pulled sideways into my parking space eyeing the five-foot distance to my front stoop, unsure that I could make the walk carrying groceries.  I called my neighbor but got no answer.  I sagged against the car door, feeling the waning of the Naprosyn and the renewed spasming of my lower back.  With relief, I saw my neighbor Melissa outside and waved, calling her name. Within minutes, my groceries sat on the counter.  As I inched around my minuscule kitchen, stowing food and thinking about lunch, the greyness seeped into my soul.  I wearily sank into my one chair, the chair in which I now sit, the chair which serves for dining and desk in my tiny house.

I felt the wind whistle outside my window.  Its song rose as it danced in the tree overhead.  Just then, a message came over the internet from my long-time friend Cecil in Kansas City.  We texted back and forth for a few minutes, me with my sad tale of helplessness, him with his encouraging words.  My tears fell onto the tiny screen of my phone as he sent vote after vote of his confidence in me.  I could not find the courage to share his faith in my resilience.

Outside, later, with a book and a cup of water, I watched as finches made their way to my funny little bird feeder.  Then my newest neighbor Ken rounded the corner of his house with two young women in tow.  He held out a vase which I admired on his kitchen counter.  He had identified it as belonging to his daughter.  Now he introduced two of his three children to me, and said that they wanted me to have the vase.  The girls came forward, each in their turn, with warm hugs and assurances of their joy at meeting me.  Their sincerity stunned me.  I stood on my porch and talked with them for a few minutes, unheeding of the shooting pain.  Here was proof of life:  Proof that the world still turns, that the old will have worthy replacements, that our efforts will not be wasted.  Fine young folks, smiling, cordial, proud of their father who had moved from a city apartment to a tiny house on wheels in the middle of the California Delta.

I walked down into my yard and stared at the gardenia bush that had bloomed so beautifully last year.  It suffered from the late frost and the harsh winds of the Delta spring. its initial reawakening had flagged to brown and brittle vegetation.  A few weeks ago, I planted an annual at its withered base, and started watering the soil again.  Today, I realized that the gardenia has again shaken off its stupor.  Tiny leaves and tender shoots push themselves from its seemingly dead branches.  The annual has three new blooms.  I eased myself back to the porch, lifted my hose, and gave the pot a good soak.  Then I stood and watched a hawk fly over our island.  Eventually, I went back inside, to find the perfect spot for my new vase.

It’s the sixth day of the one-hundred and fourth month of My Year Without Complaining.  Life continues. 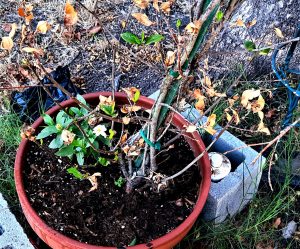