Yesterday someone told me that he thinks I am pretty.

The compliment pleased me more than it might have most women.  I have always wanted to be pretty, a goal which I shared with Rhoda’s sister Brenda, from the 70’s sitcom “Rhoda”.  In one poignant episode, Brenda sits admiring her slimmer sister and wistfully confesses her desire.

Lest you think that the friends and lovers in my life have not complimented my appearance, I hasten to disabuse you of that foul notion.  But the kinds of compliments given to me never quite satisfied me.  “You look good,” impresses me as entirely too subjective.  “I like you in that color,” acknowledges an effort on my part to accommodate another with my choice of clothing.  I appreciate such offerings, of course; but nothing so thoroughly thrills me as the notion that someone genuinely believes that I fit the word, “pretty”.

I hear my women friends howling.  Pat Reynolds in particular will protest:  “You’re beautiful and besides, who cares what they think!”  Of course, Pat founded and heads the Corinne Corley Fan Club, so  she would say something like that.

In 1977, I lived in Brighton, Massachusetts and had two roommates, Marian Zagardo and Melanie Bonfiglioli.  Both acted; both also had day jobs. Each had a kind of earthy beauty. They dragged me to all their plays, social engagements, and bar-hopping.  I sat in awe of them.

Melanie stored mounds of cosmetics in her vanity which she applied with breathtakingly perfect skill.  Buxom, blonde, and blatantly sexy, Melanie literally dodged all the males at any party.  Her tart Quincy accent and confident air attracted everyone from the little boy down the hall to the gay waiters at Cafe Vendomme.

Marian would proclaim to everyone who listened that “from the neck up,” she could fake it.  Her green eyes flashed beneath a black-haired pixie cut.  Rounded, tall, and big-shouldered, Marian did not need the rank-and-file attention of random panting terriers.  She had Johnny:  Six-foot-forever, dark-Irish, piercing blue eyes.

I openly envied Melanie and Marian.  I annoyed the hell out of them until they finally booted me out, insisting that they had advertised for a roommate, not a sister.  I understood their point of view and went crawling back to St. Louis, even more discouraged than when I had left.

In the forty intervening years, I have grown comfortable with my inconsequential frame.  I’ve reconciled myself to crooked teeth; grey hair which my rocking stylist maintains at a lovely platinum intermixed with something close to my natural brown; and a right eye which flutters in a manner so distracting that I have had it brought to my attention by more than one client.  I unabashedly proclaim myself to be a card-carrying member of the Itty Bitty Titty Society.  I rarely paint my face.  I surrendered to spectacles when the demand for prisms to correct my astigmatism overtook the beneficial countenance afforded by contact lenses.

I pride myself in other talents as well.  I’ve already bragged loud and long that a judge took judicial notice that I am relentless.  Recently, a different judge told the parties and their attorneys that I’d done a yeoman’s job as guardian ad litem.   I positively swooned (inwardly, at least; I strove to look suitably self-deprecating).  I’m grateful to be considered kind or thoughtful.  I even appreciated the recent pronouncement by a friend that my personal worth outweighed my physical shortcomings.  I paused only briefly to wonder if she intended this as praise before thanking her with as much composure as I could muster.

But until last night, I have never been called “pretty”.

So here’s to all the girls who dance the night away, or sit on the back stoop, or boldly strut down  the street.  Every one of them has been raised with some version of the Cinderella story on her mother’s lips.  I hope my son’s generation dismisses such teachings as sheer unmitigated bull-hockey.  I wish I had.  But even though I understand that I make my own glory and forge my own path, it is more than a little pleasant to know that somewhere, someone, has finally given me the label that I craved so long it took on a life of its own.

It’s the twenty-ninth day of the forty-sixth month of My Year Without Complaining.  Life continues. 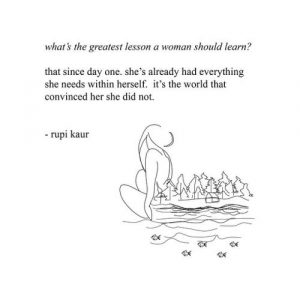 AM I NOT PRETTY ENOUGH?