I read an article yesterday called “My Tired is Not Your Tired”, written by a woman with MS.  I get her point.  Chronic pain and chronic illness cause a level of fatigue in and of themselves which cannot be compared with “normal” fatigue.  Putting aside the neurologically based enhanced fatigue, the exhaustion of dealing with physical impairment and constant illness sends us reeling.

I thought of this article last night with enormous ambivalence.

I had spent twelve hours cleaning my house, which I would not have had to do had I not spent three years in a state of denial about my sadness; and several decades avoiding confronting my overall emotional decrepitude.  I get that.  Had I been in a better, more stable frame of mine, I would not have let my house get so dirty.  But:  I had just paid to have it “deep-cleaned”.  I paid the sum asked.  I expected the bid to be higher but I paid the bid without question and the check got handed over to the cleaner while I was out of town.

I’m not angry with the person who arranged the cleaning.  In fact, though I’m perturbed at the cleaner for doing an inadequate job, I take full responsibility.  I conceded control to others, and not in the thoughtful way of appropriate delegation.  Rather, I abdicated.  I threw my head and my hands into the air and said:  I can’t do this!  Somebody else take over!

So, if we assign blame, let it be assigned to me.  As JD would say:  I accept full responsibility.  You tell me how bad you want me to feel, and I’ll let you know when I get there.

I don’t think  that the assignment of blame helps.  I know I might seem to be blaming others from time to time.  Beneath the surface, though, I strive to look instead for solutions.  So I strive to let go of irritation and see beyond the moment.  I knuckle down. I pull on the yellow Playtex gloves, fill the bucket, and tackle the grit and grime.

In the resultant state of collapse, I thought again of the woman who proclaimed that her fatigue did not relate to that of other, “normal” people.  I get that.  But I also rebel against it.  I want my pain and my fatigue to be recognized as normal.  Maybe not for you.  But for me.  Normal and worthy of being taken into consideration.  By me.  By you.  It does not make me defective.  It’s just a fact of my reality.  I should not have to knock myself silly to prove a point to anyone, much less to prove that I’m worthy of respect, or admiration, or consideration.  Or love.

I lay on my bed with my face to the window thinking of this turn of affairs:  My emotional decline, and my confrontation with that condition.  I used to believe that my body could fail me but my disposition and my intellect would compensate for my physical shortcomings.  Now I see that to have been untrue.  I strained to be considered “normal” and ignored the definition of my normal, which needed different strategies than the “normal” of other people.

I tried to sleep.  I pushed all these notions to the background.  I opened my mind to calm.

My feet dangled off the side of the bed out of necessity.  My physiology no longer tolerates twelve hours of manual labor.  Every muscle cramped.  Every nerve screamed.  My hair hurt.  My fingers swelled and my lungs heaved with the specific, tragic torture that only chemicals induce in asthmatics.  My legs could not tolerate the pressure of resting on the mattress.   I would wake, repeatedly, throughout the night.  Once I woke myself with the rising volume of my sobs.

I have not suffered a night like that in several years.  Worse than enduring the agony was knowing that I brought it on myself by turning a blind eye to my surroundings for at least the last three years.

The moon sent her softest beams to soothe me.  I can’t say this won’t hurt, she whispered.  We both know it will.  I can only promise that you will not die of this.  No other pain has killed you, nor shall this pain.  I’ll see you through.

And so she did.  I awakened, just before dawn, lying with my face still lifted to the caress of the watching midnight orb.

I can’t relate to most pain scales.  I can’t remember the time before my initial illness, which occurred at age eighteen months.  “Zero” has no relevance.  “Ten” equates to be running over by a car, or watching my mother’s long, slow death of cancer knowing that I would never, ever handle that much pain with a fraction of her grace.  But whatever the number you want to assign to the pain which I experienced last night, add this:  I survived.

It’s the second day of the forty-what?  Sixth?  month of My Year Without Complaining.  I’m still here.  Life continues. 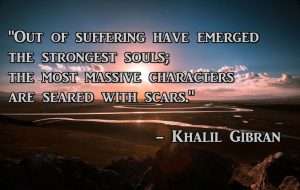