In the twenty-five years in which I sketched out a living as a family law practitioner, I told a lot of stories that had only a passing acquaintance with truth.

My clients needed to believe that I understood what they had experienced.   All of them: The man denied access to his child; the woman battered and beaten most of her married life; the disenchanted middle-aged wife who had been promised a fairy tale and got only the ashes on the hearth.  I couldn’t match them story for story but their humanity coursed through my veins.  I took the feelings and wrapped them around my own life until you couldn’t tell where one began and the other ended.

But some stories had too much truth; and some I held for the intimate moments, with my spouse, my child, my closest friends.

During a time when I barely ate anything, in the early, idyllic days of my third marriage, I allowed myself a half piece of sourdough bread to dip in coffee.  I told my new husband that my mother called it “Lebanese dessert”.  She might have, too; and I thought of her as I sucked the bitter liquid from the ball of dough and sipped the scalding coffee through my pursed lips.

On the front porch — in the living room — at the far end of the breakfast room table; my mother would sit, with her cup and saucer and a strong over-percolated brew.  Her tired eyes cleared behind the misty steam which rose as the coffee cooled.  I sat beside her, listening to her murmured stories.  The words fade from memory now.  Only the echoes of her low tone remain, soothing and calm although nothing about her life could be called either.

She’d push the saucer toward me.  I’d carefully lift the cup and set it on the table.  Then I  would take a bit of bread and dip it in the little puddle lying in the divot.  She would smile and slide the saucer back, finishing her coffee, standing to go into the kitchen.  The spell would settle around me for a few minutes more, and then I would follow her.

I took that cup with other Melamine dishes from my childhood home when my mother died, but for some reason, I got only plates, no saucers.  During my last visit to Missouri,  I found a matching saucer at an antique store in St. Charles.  I paid two dollars for it.  I would have given twice that.

Now I sit on my porch in the summer sun.  I raise my mother’s cup to my lips, and let the warmth of a packet of espresso fill my chilly bones.  The weight of my sixty-six years falls heavy on me these days.  I’ve badly gambled, and nearly lost.  I’m not even supposed to be drinking coffee but doctors be damned.  Allow me just one perfect cup, into which I can dip a bit of bread or a lemon cookie, and hear again the cadence of my mother’s voice.  She tells me that whatever happens, everything will be fine — just fine.  Just fine.

It’s the eighteenth day of the one-hundred and second month of My Year Without Complaining.  Life continues. 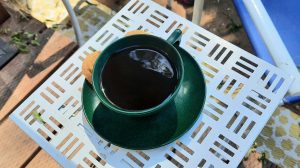 One thought on “One Perfect Cup”