Today I have done nothing more taxing than fold a load of clothes and cook rice.

A few hours ago, I showed a carpenter neighbor where I wanted three shelves built.  He bent to measure the depth of the cabinet and talked about the weight load capacity of drawer runners.  We agreed on a day for the install, and he strolled off the porch, whistling.  One sandal flopped from his foot and I cautioned him about shoe-related injuries.

Oh, I know, he assured me.  But these sandals have been around the world with me, even to Cambodia.  I can’t bear to part with them.  Then he dialed my neighbor’s number and sauntered towards her house, to bid another job.

Heat settled on our park.  Inside my house, the temperature climbed but the fans kept the air comfortable, at least for this Missouri girl.  I puttered about, occasionally reading a page or two in my Kindle app.  I poured hot water over fresh grounds and took my mug out to the porch.

Last year, I had no job except the closing of my Missouri cases which drew me eastward every month or so.  I spent my days sending out resumes and driving the levee roads on the Delta Loop.  I found bends around which broad fields lay fallow in the winter months, and burst with life as spring unfolded.  I spoke to very few people.  I drank Kombucha at the local beer room, and tea at the bakeshop in town.  Occasionally, I strolled by the broken walkway at the river’s edge and smiled at the occasional person sitting on the benches in the afternoon air.

I never thought of myself as a loner until the last few years.  Now I understand that I somehow failed to build a life which could sustain itself.  I do not know if I have left it until too late.

This afternoon, as I sat in the rocker on my porch, a hummingbird sought out the feeder which hangs on a bracket attached to my house.  It buzzed over my head and briefly perched.  I held as still as possible. As the sound of its wings tickled my ears,  I opened the camera on my tablet.  I reversed its orientation so I could watch the little bird flutter over the pool of nectar.  I didn’t get a picture; it moved too fast.  But it returned over and over again; again and again I raised the camera and studied its flight until it zipped beyond the reach of my feeble lens.

Later, as I sat at the computer, a knock summoned me downstairs.  My neighbor Helix had brought a present; a bracelet of his own design and making.  He clasped it around my wrist and then took a photograph to show his husband Louis.  I hugged him; I thanked him; and I offered to pay for the lovely thing,  He demurred.  If you ever see something and think of me, you can get it for me, he told me.  A gentleman’s way of saying, This is a gift.

Then he gave me an Oreo; told me to drink lots of water — Promise me! — and continued on his evening’s stroll.  For my part, I went back upstairs, feeling less lonely by half.

It’s the twenty-third day of the sixty-sixth month of My Year Without Complaining.  Life continues. 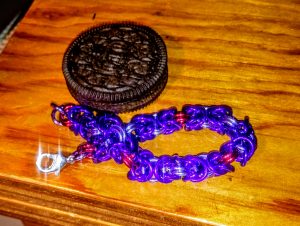