I always wanted to be an actress.

My sister Ann slayed audiences in high school with her performance in Carnival as the incomparable Rosalie.  My mother let the drama club use our house for costume construction, prop assembly, and impromptu rehearsals.  I hovered on the periphery, eight years younger and shy.  When someone needed something fetched from the kitchen, I scurried forward, eager to be useful and involved.

When my turn came, I only won a single part, the role of Helen Keller in a one-act version of The Miracle Worker.  I threw myself into realism. I took off my glasses, let my waist-length hair snarl into knots, and stumbled around the stage on my lily-white spastic legs.  My father rigged a hose from backstage so real water would flow during the final scene when Helen learns to say her first word.  I ratcheted the drama to a fevered pitch by impaling my knee on a nail.  When Miss Annie pulled me to my feet during her speech exhorting me to reach as far as I could, blood poured from the wound.  In the front row with my parents, my little brother Frank gasped into the stunned silence of the theatre.

What appealed to me about acting?  I can’t say.  Perhaps I craved attention.  Perhaps I just wanted to lose myself in a character starkly different from my own troubled nature.

For the next forty years,  I numbed my feelings with various chemicals, all prescribed except the copious quantities of single malt with which I washed down the painkillers.  While America waged its losing war on drugs and slumped into the opioid crisis, I dulled any sense of connection with a variety of white pills designed to distract me from the burning pain in my legs and the rigidity of my recalcitrant muscles.

At the end of 2013, concomitant with the start of this quest to quell expressions of negativity, I threw away the last bottle of Vicodin and faced my demons.

It took three or four years to clean my system.  My brain slowly learned to distinguish “normal” pain (the chronic condition of my existence) from injuries.  Sometimes I stub a toe or smash a finger and stare at the throbbing appendage, wondering if the resultant sensations mimic those felt by regular folks with properly functioning central nervous systems.  At night, I lull myself to sleep with the rhythm of the neurological sensations that I suppose comprise “pain” in my legs, but which — along with the chronic tinnitus that I hear as power saws — define customary life for me.

Yesterday as I eased myself out of the driver’s seat in a handicapped parking space in front of the Family Dollar General, a woman wheeled her cart down the ramp by my door.  She paused and asked if I needed help.  I swallowed my initial annoyance and thanked her, stating that I did not but I appreciated her offer.

As I struggled to the sidewalk, grasped the handle of an empty cart, and started towards the door, I wondered what expression on my face betrayed the inner turmoil.  Perhaps the lady saw my struggles to get out of the car.  Maybe she overheard my muttering, the undercurrent of profanity that I think I’m voicing only in my head but which might be escaping unbidden, uncontrolled.

Last night I binged on feel-good YouTube videos about people suffering far worse atrocities than those which plague my spine and back.  I read stories online of valiant efforts to overcome injury, disease, and disfigurement.  I sought inspiration in tales of people facing such adversities with sunny responses.  When today dawned, I resolved to start over, regardless of how overwhelming my unmedicated condition might seem.  I don’t know how much of this human existence I have left — few of us do at any given moment.  But I’m living mine to the fullest.  Starting today.  Cue the music.  Once more.  With feeling.

It’s the seventeenth day of the ninety-first month of My Year Without Complaining.  Life continues. 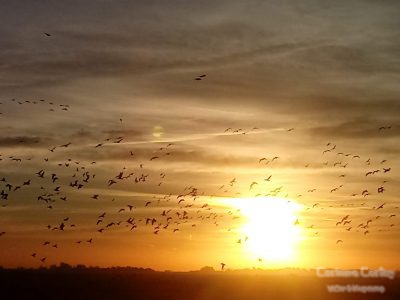 “Only that day dawns to which you are awake.”
– H.D. Thoreau