I did not know Marilyn Lyle for a long time, nor well; but nonetheless I felt the soft rising of her gentle soul.  I woke at five this morning, knowing that her end had been near.  The message on social media confirmed my fear.

Marilyn had worked in the same office in which I currently work.  Her cancer had taken her from the daily grind.  She occasionally spent a day at her old job.  We met there from time to time and once or twice socialized with the rest of the office.

I last spoke with her one Friday morning around Christmas.  She sat in the chair beside my desk and spoke of the failure of the experimental treatment which she had been receiving.  She talked about her oldest son’s sudden, recent, and tragic death.  She stressed her belief that he had moved from this world to one in which his soul found peace and pain eased its terrible grip.  I wondered if she had the same hope for herself.  I could only nod; and smile; and hold myself open to whatever she wanted to share.

Her younger son and husband tracked her last days in a private Facebook group.  Although I do not espouse any particular religious faith, my connection with the universe remains solid.  So i reached out to my own friends — to those who pray, and to others who share my own sense of the wholeness of the spirit which rests in each of us.  I asked for prayers, positive thoughts, and healing energy.  My tribe responded, which Marilyn saw and appreciated.

I might never meet Marilyn’s family.  But I know their pain, if not the comfort which they take in their Christianity.  I have shared exactly their  loss.  My mother died of cancer in 1985.  My brother took his life in 1997.  My mother-in-law slipped away in 2013 after dementia overcame her.  My favorite curmudgeon, my father-in-law, succumbed to cancer a year later.  Those hallmark departures from the slender claim I stake to stability rocked me as Marilyn’s death must have shattered those who held her dear.

Yet the passing of someone like Marilyn also calls forth a slender reed of hope.  I cannot fathom that the tenderness which lit her eyes when she spoke of her family could fade and never rekindle.  That joyfulness certainly must endure:  In a delicate blossom among the brambles by the highway; in the smile on her granddaughter’s face; in the stillness of her husband’s cheek as he remembers her touch.  The ember need not glow only on the broad cold hearth in some mystic mansion.  I can find it here, at the seaside, in the soaring sweep of the seagull’s flight and the pale shimmer of the winter moon.

My glass holds only water, but that water is clear and cool.  I raise the drinking vessel from the table and hold it toward the flicker of the fire.  I close my eyes and contemplate the year or so during which I had the great good fortune to know Marilyn.  I tip my glass; I nod; and I drink, to Marilyn, and to the peace which I believe she finally found.

It’s the seventh day of the seventy-fourth month of My Year Without Complaining.  Life continues. 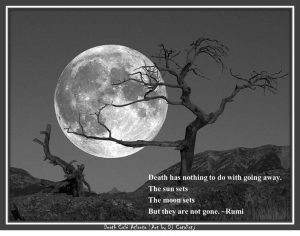