After two days without cell or internet, I have come down from the mountain and now make my way back to the Delta.  I’ve logged back into my life, paid the piper, and sent smoke signals in all directions.  In a few hours, I will unlock the doors of Angel’s Haven and resume the normal activities of daily living.

I plunged headlong into reality last evening with a slip on the floor of the shower in the bunkhouse at Point Reyes Hostel.  A woman named Dena hoisted me from the floor, summoned to help by another woman who decided she wasn’t strong enough for the task.  I don’t know the first woman’s name but they undoubtedly appeared as angels always do, when I need them and without hesitation.  In the kitchen this morning, I thanked Dena with a hug and a warm smile, meager offerings but all that I could conceivably tender.

I walked farther than I normally do yesterday.  I could not get to Limantour Beach because the sand on the trail gave way beneath my feet.  But I took a hard-packed walking trail which ran parallel to the bluffs.  Eventually it turned upwards and I could see the Pacific, the endlessness laid before me.  Her song heralded me as I trudged the length of the pathway, beckoning, encouraging.  The sight and memory of that scene more than compensates for the bruised hip and wrenched shoulder, and nearly offsets the mild humiliation of lying naked on the communal bathroom floor hours later.

When I crested the hill and stood beside the tree for which I had been aiming, I looked southward to the white cliffs at Nuvo Albion, the point claimed by Sir Francis Drake for his queen.  I had driven to the spot by land in the morning fog.  To see it from a distant point seemed somehow fitting.  Like Drake, I have come far, although unlike Drake, I will not return to my place of origin.  Tendril shoots have begun to grow from my discontented feet.  I feel myself taking root.   In the fertile soil of my new life, I might find nourishment.  Certainly I lift my face to the sky, and let the sun caress me as I never thought possible.

The day broke cool and gentle.  I rose and ventured into the kitchen with a clutch of other folks — Lauren, an artist from Richmond; Ron, a retired tech worker who lives in Rio Vista; and a woman from Switzerland whose name I did not hear.  We ground the beans and waited for the water to boil.  When I had my mug, I walked across the living room and stood in front of the window.  I felt an inexplicable surge of joy as I watched a little rabbit who surely has been the same one that I’ve been observing for the last three days.  He crossed the driveway and resumed nibbling which he must have abandoned as yesterday drew to a dusky close.  Something about his pluckiness makes me glad that this dawn was one to which I was awake.

It’s the twenty-fifth day of the fifty-fifth month of My Year Without Complaining.  Life continues. 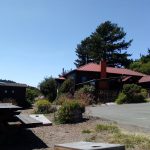 The hostel at Point Reyes. 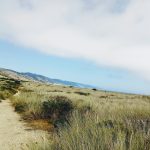 In the distance, the white cliffs of Nuvo Albion , seen from above Limantour Beach.