I would like to say that I resisted the onslaught of labor which threatened to bring about my son’s birth two days ahead of his planned delivery because of the old children’s verse about Monday’s child.  But I did not.  I started into labor early on July 06th.  A C-section had been scheduled for July 08th, six weeks before full term.  When my contractions grew close enough for concern, the midwife checked me into the hospital early Saturday evening.

The names for female functions often irritate me; and so too did what they called an entire eighteen-hour saga.  “Unproductive contractions, my dear,” intoned the midwife in her Irish accent.  I took it calmly enough until midnight and then began to roundly protest.  I had good reason for not wanting my son to be born on the 7th, the birthday of his absent father.    But the midwife would not stop my labor for sentimental purposes. I lay in the bed for another four hours with periodic glances into the region of the most evident unproductiveness.

I slept for a few hours. They gave me medicine and sent me home at noon, with instructions to present myself, as scheduled, at 9:00 a.m. on Monday morning.

And so Patrick Charles Corley came into the world on the 08th day of July, 1991, with a calm disposition.  Today he turned twenty-nine.  In the last year, his life has changed in immeasurable ways of which I will not here speak because they happen to be his story to write.  Suffice it to say that even when I miss him, even when I wish that I had turned north instead of west with my tiny house in tow so as to be nearer to him, I know that life holds promise for my son.

I’ve given him whatever start I could muster.  I’ve taught him by good example and horrible warning.  In recent years, I’ve cautioned him to glean more from the nuances of my failures than the tinsel of my successes; more from the character of people of whom I’ve shed myself than the worth of the few to whom I cling.  You could say that my greatest gift to him has been permission to analyze whatever I have shown him and do the opposite.

I wanted a girl. I wanted a  husband, 2.6 children, a three-story house, and a Buick station wagon.  I longed for the apparent normalcy in which I saw other women cloak themselves — ice tea in tall glasses on a wide wraparound porch; summer evenings with a soundtrack of cicadas; croquet on the lawn, church on Sundays, pot roast in the oven, and white saddle shoes.

I got a little boy who made faces when I cried so that smiles would emerge from behind tears; who tied his shoes in double knots and buttoned his Boy Scout uniform to his chin; who told me that God must be the glue which held the world together and that he would annoy me until I turned 103 as I nagged him every day along the way.  My boy collected coats for the homeless, wrote stories about sorrowful teenagers and papers about the US China policy, and called me from his first semester of college to thank me for teaching him perfect grammar.  He weathered his scrapes large and small.  He has stood between bullies and their victims.  He has marched for fair housing, safe streets for college co-eds, and an end to police brutality.  He speaks his mind but without cruelty.  He has never stopped fighting for justice, equality, and liberty for every person, of every ilk, in every last corner of America.

I could not have gotten a better son.  I could not be more proud, more humbled by what he has become, what he has done without asking for fanfare or accolade.  He took the meager heritage that I handed him, and spun it into strands of silver, gold, and glory.  My greatest honor remains the privilege to have born him to this world; my greatest regret might be that I did not have more to give, and left him to forge ahead with so little armor.  But he has done far more than I ever dreamed, and with a certain grace that takes my breath away.

It’s the eighth day of the seventy-ninth month of My Year Without Complaining.  Life continues. 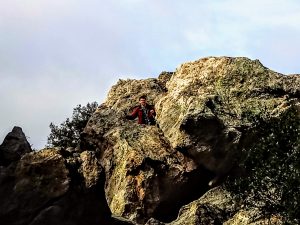